Japan stands at a crossroads over its reliance on nuclear power as the country marks the second anniversary of one of the world’s worst atomic disasters. On March 11, 2011, a massive earthquake triggered a devastating tsunami that struck Japan’s northeast coast, killing more than 20,000 and leaving at least 150,000 homeless. The twin disasters also triggered a meltdown at the Tokyo Electric Power Company’s Fukushima Daiichi nuclear power plant, stranding more than 315,000 evacuees. Japan responded by halting nearly all nuclear-related projects. But two of the Fukushima nuclear power complex’s existing reactors are now operational again, and construction has resumed at the Oma nuclear power plant. Over the weekend, thousands of Japanese marched in opposition to nuclear power. We are joined from Kyoto by Aileen Mioko Smith, executive director of Green Action. [includes rush transcript]

AMY GOODMAN: We go now to Japan, which is marking the second anniversary of one of the world’s worst atomic disasters. It was March 11, 2011, when a massive 9.0-magnitude earthquake triggered a devastating tsunami that struck Japan’s northeast coast. It left more than 20,000 dead or missing, and forced 150,000 to flee their homes. Many have never been able to return. Several thousand people remain unaccounted for. The twin disasters triggered a meltdown at the Tokyo Electric Power Company’s Fukushima nuclear power plant. The radiation that spewed from the plant stranded more than 315,000 evacuees.

Today thousands observed the anniversary with a moment of silence. Japan’s prime minister said the country would take the lessons learned from the disaster and apply them throughout the rest of the country.

PRIME MINISTER SHINZO ABE: [translated] We hope to work even closer with those affected by the disaster to rebuild the disaster areas and restore the livelihoods of those affected. I take this opportunity to strongly promise that we will also look to utilize the lessons learned across the nation to build a country that is stronger against disaster.

AMY GOODMAN: Meanwhile, over the weekend in Japan, thousands marked the second anniversary of the disaster by marching in opposition to nuclear power. This is protester Mitsuhiro Watanabe speaking in Tokyo Sunday.

MITSUHIRO WATANABE: [translated] Take nuclear energy completely offline, and I want the government to make a complete change over to natural energy sources for the nation.

To talk more about the situation, we go to Kyoto via Democracy Now! video stream to speak with Aileen Mioko Smith, executive director of Green Action.

Welcome to Democracy Now! Can you talk about what people are calling for today, Aileen, on the second anniversary of the nuclear catastrophe in Japan?

AILEEN MIOKO SMITH: Well, people are calling for various things, but two very important issues. One is justice for the Fukushima victims. There are 150,000 people that are still—that have been displaced. And, of course, many of them are children. There aren’t sufficient health surveys being undertaken. And there’s been no compensation regime for these people that is sufficient. The other is that citizens are calling for the end of nuclear power in Japan. This is still the majority view in Japan. And the Abe government is now trying to restart nuclear power, and there’s a lot of opposition to that.

AMY GOODMAN: What has—what is the government saying at this point?

AILEEN MIOKO SMITH: I think that—well, the government is saying we will decontaminate the land, which is, of course, virtually impossible. Just three days ago, 54,000 people who were displaced were told—and they had been told as though they could go back very soon—were told they have to wait another four years. Well, whether four years will do it or not, I mean, they are trying to decontaminate the land, which is, of course, extremely difficult, if not impossible. So, a lot of these decontamination efforts of clearing the land of radioactivity is not working, and it’s sort of making people having to live in limbo outside. I mean hundreds—tens of thousands of people like that. And it just seems so unjust, rather than, you know, going forward and compensating these people and giving relief to these people.

There was a law passed six months ago which was really fantastic, and that is through efforts of Fukushima citizens and NGOs, citizens around Japan, multi-partisan members of the Diet. They passed a law for the relief and protection of Fukushima children and victims. This was great, but it just established sort of the basic standard of sort of guidelines on how to look at the situation. But concrete implementation, making concrete laws and legislation in order to implement that relief, has not moved forward at all, and instead there’s this talk about, well, we’ll decontaminate the land; you know, you can go—come back and live.

AMY GOODMAN: Last week, the World Health Organization warned people in the most contaminated areas in Fukushima have a higher risk of developing certain cancers. More than 40 percent of children under the age of 18 in Fukushima have developed thyroid abnormalities. Leading scientist Shinichi Suzuki warned the effects would only come to light in the long term.

SHINICHI SUZUKI: [translated] In the case of Chernobyl, thyroid cancer started to appear four or five years later. It doesn’t show up straightaway. Long term, even more than 25 years on, there are still cases of thyroid cancer appearing in Chernobyl. So, whatever we tell mothers right now, they’re unlikely to be reassured.

AMY GOODMAN: Your response to this, Aileen?

AILEEN MIOKO SMITH: Well, we’re very concerned about the thyroid issue. There needs to be monitoring on it. As mentioned in what was just said, it takes several years to appear. And we hope that the increases will not, you know, build up.

AMY GOODMAN: Shortly after the Fukushima accident, Democracy Now! spoke to George Monbiot, the author and columnist with The Guardian of London, about the incident and implications for the use of nuclear energy.

GEORGE MONBIOT: I’m very worried that the global response to what’s happening in Fukushima will be to shut down nuclear power stations around the world and to cancel future nuclear power stations, and that what will happen is that they will be replaced by coal. Now, coal is hundreds of times more dangerous than nuclear power, not just because of climate change, though, of course, climate change is a big one, but also because of industrial accidents and because of the impacts of pollution on local people. If we just look at industrial accidents alone, these massively outweigh both the fatalities and the injuries caused by any nuclear accident we’ve ever seen.

AMY GOODMAN: That was George Monbiot of The Guardian. Aileen Mioko Smith, your final comment?

AILEEN MIOKO SMITH: Well, being from the city where the Kyoto Protocol originated, I can tell you very clearly that one of the reasons we did not move forward with work on reducing global warming in Japan is because of nuclear power. Nuclear power was stated as a way of reducing CO2, when the government knew that it won’t happen, new nuclear builds would not happen. And as a result, we lost a decade or more without working on more conservation, efficiency and renewables. So, nuclear power is the biggest block towards making progress on conservation and energy efficiency and renewables. And so, what happens is that, you know, nuclear power is unreliable. It shuts down. Well, what do you have to replace it? Coal-fired plants. And so you spike up the CO2 releases.

So what we need to do is end nuclear power, and that will open up the way to more conservation, renewables and, you know, renewable energy. Germany is a good example. There was a blossoming of renewable energy, but only after Germany decided to stop nuclear power. So, you know, when you hear something that was just said, you think, “Oh, that makes sense,” but it’s not true. Look at the reality.

AMY GOODMAN: I want to thank you very much, Aileen Mioko Smith, executive director of the Kyoto-based group Green Action, speaking to us from Kyoto, Japan. And, of course, we’ll continue to cover this issue in Japan and the United States and around the world. Thanks so much for being with us. 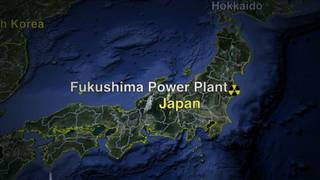