A leaked audio recording has emerged of the statement Army whistleblower Bradley Manning delivered at his pretrial hearing in military court late last month. Manning acknowledged he gave hundreds of thousands of classified documents to WikiLeaks, saying he wanted to show the American public the “true costs of war” and “spark a domestic debate on the role of the military and our foreign policy in general as it related to Iraq and Afghanistan.” This is the first time Manning’s voice has been heard publicly since he was arrested nearly three years ago. We air excerpts of his remarks, hearing Manning describe in his own voice the moment he decided to release the documents and the outrage he felt at the “Collateral Murder” video of an Apache helicopter attack in Iraq. [includes rush transcript]

AARON MATÉ: Since his arrest nearly three years ago for the largest leak of state secrets in U.S. history, Army Private Bradley Manning has not been able to tell the world his own story. Accusing him of “aiding the enemy” for providing a trove of classified U.S. cables and files to WikiLeaks, the Bush administration and Obama administrations have kept Manning in harsh military detention, including many months in solitary confinement, prompting the U.N.'s top torture expert to criticize the U.S. for “cruel and degrading” treatment. Facing up to life in prison, Manning's voice has been silenced by more than 1,000 days behind bars and the full brunt of the national security state.

Well, the silencing of Bradley Manning ends today. A leaked audio recording has emerged of the statement Manning delivered at his pretrial hearing in military court late last month. Manning acknowledged he gave the classified documents to WikiLeaks. He said he wanted to show the American public, quote, the “true costs of war” and “spark a domestic debate on the role of the military and our foreign policy in general as it related to Iraq and Afghanistan.”

AMY GOODMAN: During the hearing at Fort Meade, Bradley Manning took responsibility for leaking files including the so-called “Collateral Murder” video of an Apache helicopter attack in Iraq, U.S. diplomatic cables, records on detainees at Guantánamo. He described the anguish he felt at witnessing the video footage of U.S. aerial pilots shooting down unarmed Iraqi civilians and discussed his personal isolation in the military as a gay soldier.

Portions of Manning’s statement were reported by journalists and supporters who witnessed it inside the courtroom. But military censors prevented the release of a complete transcript until just this week. Now, Democracy Now! has obtained a secret recording of Manning’s remarks that allows us to hear Bradley Manning tell his story in his own words. It’s the first time most people will hear not just Manning’s story, but his voice.

In a moment, we’ll be joined by Daniel Ellsberg, arguably the nation’s most famous whistleblower for leaking the Pentagon Papers in 1971. But first let’s turn to the leaked audio of Bradley Manning’s statement. In this clip, Manning begins to explain his motivation for releasing a trove of classified information to WikiLeaks. He starts with what are called “Significant Activities” tables, or SigActs for short, incident reports from U.S. military operations in Iraq and Afghanistan. And you’re going to have to listen closely, as the audio can be very difficult to hear. After downloading those SigAct tables, Manning said he began to think about what he knew and the information he had in his possession.

BRADLEY MANNING: I began to think about what I knew and the information I still had in my possession. For me, the SigActs represented the on-the-ground reality of both the conflicts—of both the conflicts in Iraq and Afghanistan. I felt we were risking so much for—we were risking so much for people that seemed unwilling to cooperate with us, leading to frustration and hatred on both sides. I began to become depressed with the situation that we found ourselves increasingly mired in year after year. The SigActs documented this in great detail and provided context of what we were seeing on the ground.

In attempting to conduct counterterrorism, or CT, and counterinsurgency, COIN, operations, we became obsessed with capturing and killing human targets on lists and on being suspicious of and avoiding cooperation with our host nation partners, and ignoring the second and third order effects of accomplishing short-term goals and missions.

I believed that if the general public, especially the American public, had access to the information contained within the CIDNE-I and CIDNE-A tables, this could spark a domestic debate on the role of the military and our foreign policy in general, as well as it related to Iraq and Afghanistan.

I also believed the detailed analysis of the data over a long period of time by different sectors of society might cause society to reevaluate the need or even the desire to engage in counterterrorism and counterinsurgency operations that ignore the debate—that ignore the complex dynamics of the people living in the effected environment every day.

AMY GOODMAN: Bradley Manning went on to discuss the so-called “Collateral Murder” video of an Apache helicopter—made by military—Apache helicopter attack in Iraq, July 12, 2007, and admitted for the first time being the source of the leaked tape. The video shows U.S. forces killing 12 people, including a Reuters videographer, Namir Noor-Eldeen, and his driver, Saeed Chmagh. Bradley Manning said he was alarmed by the U.S. pilots’, quote, “delightful bloodlust,” which, he said, “seemed similar to a child torturing ants with a magnifying glass.” Bradley Manning began by saying it was clear to him the helicopter incident happened because the pilots mistakenly identified Reuters employees as a potential threat and that the people in the bongo truck were merely attempting to assist the wounded.

BRADLEY MANNING: It was clear to me that the event happened because the aerial weapons team mistakenly identified Reuters employees as a potential threat and that the people in the bongo truck were merely attempting to assist the wounded. The people in the van were not a threat but merely “Good Samaritans.”

The most alarming aspect of the video to me, however, was the seemingly delightful bloodlust the aerial weapons team—they appeared to have. They dehumanized the individuals they were engaging and seemed to not value human life by referring to them as, quote, “dead bastards,” unquote, and congratulating each other on the ability to kill in a large—in large numbers.

At one point in the video, there’s an individual on the ground attempting to crawl to safety. The individual is seriously wounded. Instead of calling for medical attention to the location, one of the aerial weapons team crew members verbally asks for the wounded person to pick up a weapon so that he can have a reason to engage. For me, this seems similar to a child torturing ants with a magnifying glass.

While saddened by the aerial weapons team’s true lack—crew’s lack of concern about human life, I was disturbed by the response of the discovery of injured children at the scene. In the video, you can see the bongo truck driving up to assist the wounded individual. In response, the aerial weapons team crew assumes the individuals are a threat. They repeatedly request for authorization to fire on the bongo truck, and once granted, they engage the vehicle at least six times.

Shortly after the second engagement, a mechanized infantry unit arrives at the scene. Within minutes, the aerial weapons team crew learns that children were in the van, and despite the injuries, the crew exhibits no remorse. Instead, they downplay the significance of their actions, saying, quote, “Well, it’s their fault for bringing their kids into a battle,” unquote.

AMY GOODMAN: Bradley Manning, discussing the video showing U.S. helicopter pilots killing 12 people in Iraq, including two Reuters employees. Manning went on to tell the court he was encouraged by the public reaction to the video’s release. He said he hoped the public would be as alarmed as him about the conduct of the aerial weapons team crew members. Listen carefully.

BRADLEY MANNING: I hoped that the public would be as alarmed as me about the conduct of the aerial weapons team crew members. I wanted the American public to know that not everyone in Iraq and Afghanistan were targets that needed to be neutralized, but rather people who were struggling to live in the pressure-cooker environment of what we call “asymmetric warfare.”

After the release, I was encouraged by the response in the media and general public who observed the aerial weapons team video. As I hoped, others were just as troubled, if not more troubled, than me by what they saw.

AMY GOODMAN: That was Army whistleblower Bradley Manning reading a prepared statement in court last month—a statement you were not supposed to hear. But for the first time, this video—this audio recording is being heard, surreptitiously recorded in the court.

For more, we’re joined by perhaps the country’s most famous whistleblower, Daniel Ellsberg, who leaked the Pentagon Papers in 1971, the secret history of U.S. involvement in Vietnam. Daniel Ellsberg is joining us from the University of California.

We’re going to go to a break to work out the—our connection to the Berkeley studios. This is Democracy Now!, democracynow.org, The War and Peace Report. Back in a minute. 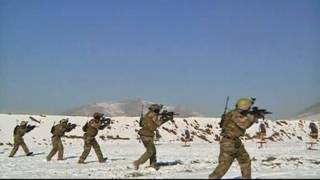