As President Obama announced plans to withdraw another 34,000 troops from Afghanistan, longtime peace activist Kathy Kelly warns the war shows no end. Kelly, who just returned from Afghanistan, says the company formally known as Blackwater is now running a base just outside of Kabul used by the Special Operations Joint Task Force. On Monday, a U.S. air strike in Afghanistan killed 10 civilians. The strike hit what the NATO occupation force called a suspected Taliban hideout in the province of Kunar. Kelly, co-coordinator of Voices for Creative Nonviolence, warns Afghan civilians continue to suffer from longest-running war in U.S. history. [includes rush transcript]

NERMEEN SHAIKH: We continue our coverage of President Obama’s State of the Union address now, as we turn to his comments on Afghanistan.

PRESIDENT BARACK OBAMA: Tonight, we stand united in saluting the troops and civilians who sacrifice every day to protect us. Because of them, we can say with confidence that America will complete its mission in Afghanistan and achieve our objective of defeating the core of al-Qaeda. Already, we have brought home 33,000 of our brave servicemen and women. This spring, our forces will move into a support role, while Afghan security forces take the lead. Tonight, I can announce that over the next year another 34,000 American troops will come home from Afghanistan. This drawdown will continue. And by the end of next year, our war in Afghanistan will be over.

Beyond 2014, America’s commitment to a unified and sovereign Afghanistan will endure, but the nature of our commitment will change. We are negotiating an agreement with the Afghan government that focuses on two missions: training and equipping Afghan forces, so that the country does not again slip into chaos, and counterterrorism efforts that allow us to pursue the remnants of al-Qaeda and their affiliates.

AMY GOODMAN: The announcement of a troop drawdown comes as a U.S. air strike in Afghanistan has killed 10 civilians. The strike hit what the NATO occupation force called a suspected Taliban hideout in the province of Kunar. Most of the dead were women and children.

For more, we’re joined by Kathy Kelly, co-coordinator of the Voices for Creative Nonviolence, a campaign to end U.S. military and economic warfare. She just returned from her most recent trip to Afghanistan.

Kathy, your response to President Obama saying that the U.S. troops will be out next year, though the Pentagon does say it might be another 10 years?

KATHY KELLY: President Obama is a hawkish president who likes to appear dovish. The reality is that the Pentagon has said that the troops will be in Afghanistan until 2024 and beyond. And in the 21st century military that the president and the Pentagon want to create, they don’t necessarily need big, huge military bases all across Afghanistan. What they want to have are special operations troops working in coordination with the capacity for drone strikes, weaponized drone strikes and drone surveillance. And what you mentioned with regard to the tragedy in Kunar just last night is so symptomatic of what happens. The civilians are at high risk. The antagonism toward the United States continues to rise. And the Taliban says that, until all the troops are out, they will continue to fight. So Afghans are saddled with this ongoing war.

KATHY KELLY: Well, winters are so harsh in Afghanistan. And this time I was able to go with the Afghan Peace Volunteers up the mountainside, higher and higher up, to the homes where widows and orphans are literally pushed up the mountainside because they can’t afford piped water. They can’t afford to have latrines in their home, so they move higher to the hovels, where they shell almonds all day long and use almonds as fuel for their homes. Now, the United States has, at times, characterized the war in Afghanistan as a humanitarian war, that we’re there to protect widows and orphans and women and children. And that’s simply not true. The conditions for people in Afghanistan are deplorable. In fact, now, particularly in the south of the country, the U.N. is very alarmed because over one million children under age five are suffering from acute malnutrition. And the expenditures that the United States development groups have made are now approaching $100 billion, and yet Afghanistan is still considered one of the worst places in the world in which a person can live—35 percent unemployment among men; the education system is completely corrupt. And this corruption is very linked to the ways that the United States has put money in the pockets of corrupt warlords all across Afghanistan.

KATHY KELLY: Well, it’s anecdotal, but every time I’ve traveled into Afghanistan, three-fourths of the plane is filled with passengers who are security contractors and military people. And the Blackwater company, now in its third renaming, I believe—it is now called Academi—is building on the outskirts of Kabul, on 10 acres, a huge new base designed particularly for training of special operations forces. Now, these special operations forces, they’re comprised of some of the most fierce and fearsome military people in the world—Navy SEALs and Marine Ranger—Army Rangers. And these are people who engage in the despicable night raids that raise so much anger and confusion amongst Afghans. You know, their homes are broken into in the middle of the night, and embedded reporters have talked about how the soldiers tornado through homes, hurling bodies across the room. And many people have been killed in the night raids who then turn out to be civilians. And later, you’ll hear an apology from the top military brass in Afghanistan. But the night raids, the drone surveillance, the drone attacks, calling in aerial bombardments, can be accomplished by the special operations forces. And that’s the future military presence in Afghanistan.

NERMEEN SHAIKH: But in addition to that, Kathy Kelly, a recent U.N. report has found that torture has been widely used by Afghan security forces, the forces that are supposed to take over once the U.S. leaves, and in fact forces who have been trained by the U.S. Are you familiar with the report? And did you hear anything about this while you were in Afghanistan?

KATHY KELLY: The people are very, very terrified of being arrested and imprisoned because of the possibility of torture and also because you can be held for months and months and months without any charge. And the United States is in fact still completing construction of three new prisons, which possibly would be turned over to Afghanistan. But Karzai himself, the president of Afghanistan, has said that he believes that the U.N. report is true.

And the claim that the United States is going to be able to effectively train the many different militarized forces in Afghanistan is very hard to believe, because so many of the people that are drafted into the Afghan military are illiterate, and many of them, I think, are there because they’re desperate for money. But there are other kinds of security which are crucial, absolutely essential in Afghanistan: food security, healthcare delivery security, some security that people could get an education for their children. But the money, the resources, the ingenuity constantly gets poured into military solutions—

AMY GOODMAN: Kathy Kelly, we have to—

KATHY KELLY: —and they haven’t worked in Afghanistan.

AMY GOODMAN: We have to break in 30 seconds, but very quickly, what you think needs to be done?

KATHY KELLY: Reparations. I think the United States and every other country that has invaded and wrecked Afghanistan should pay reparations for suffering caused and help to rebuild an infrastructure appropriate for that country.

AMY GOODMAN: Kathy, we want to thank you for being with us. This was your—

AMY GOODMAN: Kathy Kelly, co-coordinator of Voices for Creative [Nonviolence], a campaign to end U.S. military and economic warfare, has just returned from her trip to Afghanistan. This is—the [Voices] for Creative Nonviolence. This is Democracy Now!, democracynow.org, The War and Peace Report. 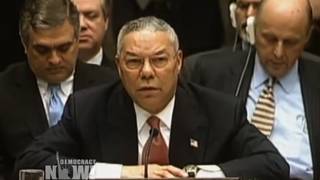