Addressing the plight of some 11 million undocumented people currently living in the United States, President Obama’s State of the Union address emphasized the benefits of comprehensive immigration reform. Obama urged Congress to send him legislation to sign into law in the next few months. We get reaction on what Obama didn’t say — namely, his record levels of deportation — from Aura Bogado, a reporter who covers immigration and racial justice for The Nation. [includes rush transcript]

NERMEEN SHAIKH: As we wrap up our look at President Obama’s State of the Union address, we turn to his comments on how to address the plight of some 11 million undocumented people currently living in the United States.

Real reform means stronger border security, and we can build on the progress my administration has already made, putting more boots on the southern border than at any time in our history and reducing illegal crossings to their lowest levels in 40 years. Real reform means establishing a responsible pathway to earn citizenship, a path that includes passing a background check, paying taxes and a meaningful penalty, learning English, and going to the back of the line behind the folks trying to come here legally.

AMY GOODMAN: Well, for more, we’re joined in New York by Aura Bogado, a reporter who covers immigration and racial justice for The Nation. Last night, she wrote the piece just after President Obama finished speaking, “What Obama Didn’t Say on Immigration at the State of the Union.” Her latest piece for the magazine is “Dreamers Fight Deportations.”

Welcome to Democracy Now!, Aura. What didn’t he say?

You know, we heard the same focus on border security, and this is at a time when, as he mentioned, net migration is at zero percent, so it’s really not going to get any lower than that. What people were hoping to hear was a halt to deportations, which really sort of makes sense. There were at least five DREAMers, young undocumented students and recent graduates, who were in the audience. One of them isn’t even eligible, actually, for the DREAM Act, even though she has worked tirelessly for it for a good portion of her life. Her name is Julieta Garibay. I just spoke with her this morning. And because she’s 32 years old, she just sort of missed that cutoff date. She’s actually the founder of United We Dream. And she said that she was, you know, honored to be able to be there.

AMY GOODMAN: Who invited her?

AURA BOGADO: One of the senators, I believe, invited her. I’m not exactly sure. But, you know, she’s happy to be there. She’s happy that Obama has an inclusive sort of agenda, in terms of recognizing LGBT partners, moving forward. But he didn’t say anything about stopping deportations. This is a president whose administration has deported more people than any other president. And a really goodwill gesture, that would really make sense, would be to halt deportations at this point. If we’re looking at a comprehensive immigration reform that’s going to regularize the status of 11 million people, let’s be generous and say that we can have the capacity to process 5,000 applications per day, per working day. In a given year, that’s about a million people. That’s going to take 10 years to really get those people through the start of a process. So, what’s going to happen in those 10 years? Are the deportations going to continue? We really don’t know. We didn’t hear anything about that from Obama, and certainly not from Rubio.

NERMEEN SHAIKH: And what are the implications of expanding border security?

AURA BOGADO: Well, more of the same, right? More troops on the ground, as Obama mentioned, the use of drones, which we already know are manning a good part of the border. And implicit in that, too, is interior enforcement, and again, the fact that we have so many people detained who are not criminals. This is a civil matter. Immigration is a civil matter. I had recently spent time in a detention center in Broward County, that sort of touts itself as the most humane, almost as a recreation facility. But it really is a place that will wear you down. Detainee after detainee told me, “You know, I’ve been here for so long, I want to sign those deportations and just get out of here.”

AMY GOODMAN: Tell us, as we wrap up, about Miguel Guerra, as a story of where we go from here.

AURA BOGADO: Miguel Guerra, he was one of the people who is part of a delegation of more than 250 workers that’s in Washington right now. He came out from Phoenix. He was arrested in a demonstration against Joe Arpaio this last summer. And he’s in a deportation hearing, in a deportation process. His wife is undocumented. His oldest daughter applied for deferred action, so she has at least two years to stay. And he has two kids that are born in this country. So he represents so many families that sort of have this mixed status and are just a police siren away from being split up because of this completely broken immigration policy.

AMY GOODMAN: Aura, we have to continue this conversation, but we will link to your pieces at The Nation. Aura Bogado is the immigration and racial justice reporter for The Nation. Her latest piece, “Dreamers Fight Deportations.” 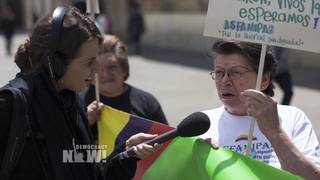