“We’ve Lost Our Country”: An Iraqi American Looks Back on a Decade of War That’s Devastated a Nation

We continue our look at the Iraq War’s 10th anniversary with Raed Jarrar, an Iraqi-American blogger and political analyst. Jarrar led the first civilian casualty survey in Iraq as the country director of Civic Worldwide and has closely monitored the issue of civilian casualties as well as the larger fallout from the U.S. invasion for the last 10 years. He’s currently the communications director at the American-Arab Anti-Discrimination Committee. Discussing Iraq’s current Shiite-Sunni divide, Jarrar says the U.S. invasion has brought “the complete destruction of the Iraqi national identity. There is no civic identity in Iraq anymore. So people … regressed. They went to the other level that they can identify with, and that, unfortunately, was the sectarian affiliation.” [includes rush transcript]

StoryApr 04, 2003“We Don’t Do Body Counts” Says Gen. Tommy Franks: To Counter the Pentagon’s Refusal to Track Civilian Casualties We Talk with the Founders of Iraqbodycount.Net

AARON MATÉ: As we continue our look at the 10th anniversary of the Iraq invasion, we’re joined now by Raed Jarrar, an Iraqi-American blogger and political analyst. He led the first civilian casualty survey in Iraq as the country director of Civic Worldwide. He has closely monitored the issue of civilian casualties, as well as the larger fallout from the U.S. invasion for the last 10 years. He is presently communications director at the American-Arab Anti-Discrimination Committee, joining us now from Washington, D.C.

Raed, welcome to Democracy Now! Can you tell us where were you 10 years ago today?

RAED JARRAR: I was in Baghdad. Actually, I was living in Jordan at the time, finishing my master’s degree. But I went back to Baghdad in February of 2003 to be with my family during the invasion. Everyone knew that the invasion will happen and that the Iraqi government will fall. So I went to help prepare for the U.S.-led invasion. I was helping dig a well in our backyard to get drinking water and store some fuel for electricity and some food. So, this is what everyone was doing at those days. And I remember waking up on the 19th with the noises of sirens and explosions in the early morning. I remember that very clearly. The rest of my family got up, and we had breakfast. And we knew that it has started, it has begun.

RAED JARRAR: Yeah, I mean, it’s really hard to describe in words. When I think of where we used to live 10 years ago and what is going on now, it’s like two different lives. Ten years ago, you know, we lived within half an hour from all of my relatives from both sides, my mother’s side and my father’s side. My uncles, my cousins, my aunts, we all lived, you know, in Baghdad. Now, I don’t know a single person in the entire country. I don’t know a single person in Iraq. When I go for a visit, I can’t visit anyone, because all of my relatives and friends and colleagues and neighbors, they were either killed or they left the country, at somewhere else.

My immediate family now lives all the way from the west coast of the U.S. and Canada until New Zealand. We are literally all around the world. A family that was within half an hour away from each other now are all around the world. And the toll on our family, of course, you know, was—we are among the luckier ones, because we didn’t lose immediate family members. But, of course, we lost everything. We lost our house. We lost—you know, we lost our country. And we moved on, and now we have new lives.

RAED JARRAR: Correct. I mean, I mentioned previously how I’m half-Sunni and half-Shiite. Many Iraqis jokingly now refer to people like myself as “Sushis.” And, you know, like, it’s like it’s getting—our community is getting smaller and smaller, because there are less mixed marriages. Before 2003, I did not know who from my friends were Sunnis or Shiites, and we’ve never expressed any concerns, we’ve never heard any stories about this person being a Sunni or a Shiite—and not only from a personal experience. The example that I always give is the 55 deck of cards that was printed by the Pentagon and CIA when they went after the top 55 leaders in Iraq. Thirty-six out of those 55 were Shiites. It’s almost the same representation publicly. I mean, not to say that the former Iraqi government was all-inclusive and everyone was happy, but it was a dictatorship that was secular. So people’s ethnic and sectarian affiliations were not really a part of that oppression. If you supported the government, you were—you had a good life. And if you opposed it, regardless of your sectarian affiliation, you were destroyed, and your entire family was destroyed.

Unfortunately, these things changed completely now. They changed because of two reasons. The first one is the complete destruction of the Iraqi national identity. There is no—there is no civic identity in Iraq anymore. So people went—they regressed. They went to the other level that they can identify with, and that, unfortunately, was the sectarian affiliation. The second reason is that this is actually the system that was introduced by the United States in 2003. The Governing Council that was created by the U.S. in 2003 marks the first occasion where Iraqis were chosen to run the country based on their sectarian and ethnic affiliations in Iraq’s contemporary history. It never happened before the U.S. came.

AMY GOODMAN: I want to turn to former President George W. Bush. In 2010, in his first major interview since leaving office, Bush spoke to NBC’s Matt Lauer about the Iraq War.

MATT LAUER: So, by the time you gave the order to start military operations in Iraq, did you personally have any doubt, any shred of doubt, about that intelligence?

MATT LAUER: Not everybody thought you should go to war, though. There were dissenters.

GEORGE W. BUSH: Of course there were.

MATT LAUER: There were—did you filter them out?

GEORGE W. BUSH: I was a dissenting voice. I didn’t want to use force.

MATT LAUER: Your words: “No one was more sickened or angry than I was when we didn’t find weapons of mass destruction.” You still have a sickening feeling—

MATT LAUER: —when you think about it.

MATT LAUER: Was there ever any consideration of apologizing to the American people?

MATT LAUER: If you knew then—

MATT LAUER: —what you know now—

MATT LAUER: —you would still go to war in Iraq?

GEORGE W. BUSH: I, first of all, didn’t have that luxury. You just don’t have the luxury when you’re president. I will say, definitely, the world is better off without Saddam Hussein in power, as are 25 million people who now have a chance to live in freedom.

AMY GOODMAN: That was Matt Lauer interviewing President George W. Bush in 2010. He didn’t follow up that question by asking, “Would you apologize to the Iraqi people?” But, Raed Jarrar, can you talk about Bush’s response and what that apology should look like?

RAED JARRAR: I don’t think we should be asking President Bush if he should apologize or if what happened was criminal and immoral. I think there should be an independent investigation in the United States to hold those who took the U.S. to war accountable, including President Bush and other politicians in his administration. The crimes that were committed and the fraud and the money that was spent and the lives that were destroyed deserve an apology and a compensation, and they deserve everyone who was behind these attacks to be held accountable.

I think the vast majority of Iraqis expects to get an apology. They expect to get compensation for what happened to their country in the last two decades. The country has been destroyed. And the people who were killed in Iraq were compensated by $2,500, believe it or not. The U.S. government has a policy of compensating Iraqis by giving them $2,500 for any family member who was killed and $2,500, the same amount, for any property that is damaged. I mean, just see how humiliating it is to come to a family that lost their car and two of their kids, and give them $7,500 because this is our policy. We give them $2,500 apiece, whether that piece is a human being or a car. I mean, imagine the level of humiliation, the level of disregard to human life in Iraq. All of these things have to be—have to change. I mean, it’s true that the U.S. has ended its military occupation to Iraq, but the U.S. moral and legal obligations to the country are not over yet.

AMY GOODMAN: Final question about casualties: What do you believe are the—is the total in Iraq?

RAED JARRAR: Yeah, it’s not really about what I believe. I just want to explain a discrepancy between the two numbers that we hear thrown around all the time. One of them is the documented number. Like the previous guest explained, this is a number that is based on how many Iraqi casualties were reported in English-speaking media. We see, like, this is like a small portion of the full number of casualties. Now, there are other studies that, based on sampling, tried to reach to the full estimated number. So we have two different layers of numbering. One of them is the full documented number, and the other is the full estimated number. And the factor between them, through all the different studies that took place in the last 10 years, is around 10. If we saw the factor, for example, between the Lancet study, or the two Lancet studies that were conducted by Johns Hopkins, at the time that the _Lancet study found the number to be around—the full estimated to be around 655,000, Iraq Body Count was around 65,000 of documented numbers. There is a factor of 10.

So, now, I think the agreed-upon number among many of the observers of Iraqi casualties is that the documented number is around 120,000, but then the full estimated number is somewhere in the area of 1.2 million. And the discrepancy between the two numbers is usually confusing, but I think once people know why we have these two numbers, it becomes easier to understand the full picture.

AMY GOODMAN: Raed Jarrar, I want to thank you for being with us, Iraqi-American blogger, political analyst, communications director at the American-Arab Anti-Discrimination Committee, joining us from Washington.

When we come back, President Obama is making his first trip to Israel. We’ll speak with Columbia University Professor Rashid Khalidi. Stay with us.

Brokers of Deceit: As Obama Visits Israel, Scholar Rashid Khalidi on How the U.S. Undermines Peace

NEXTBrokers of Deceit: As Obama Visits Israel, Scholar Rashid Khalidi on How the U.S. Undermines Peace 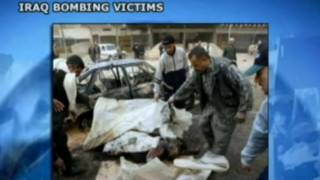 “We Don’t Do Body Counts” Says Gen. Tommy Franks: To Counter the Pentagon’s Refusal to Track Civilian Casualties We Talk with the Founders of Iraqbodycount.Net