Peace activist Carlos Arredondo has come to be known as “the man in the hat” and widely described as a hero for a viral image of him in a cowboy hat pinching the severed artery of a bloodied, wheelchair-bound victim in the aftermath of the Boston Marathon bombings. Arredondo is no stranger to tragedy: He became a prominent opponent of the Iraq War after his son, Lance Cpl. Alexander Arredondo, was killed in Iraq in 2004. His surviving son, Brian, committed suicide in 2011. Carlos and his wife Mélida, join us to describe witnessing the Boston Marathon bombings and the immediate response to aid the victims. [includes rush transcript]

AMY GOODMAN: We begin today’s show with Carlos Arredondo and his wife Mélida. They’re joining us now on the phone from Boston. They were both at the scene of the bombing yesterday.

We welcome you to Democracy Now! Carlos, let’s begin with you. Tell us what you experienced, what you saw, where you were.

My reaction was to just jump the fence, where the—to the street and cross to jump the second fence and landing in this area where was pretty much the serious injuries. You know, everybody was on the ground. There was broken limbs, people with no limbs, people totally passed out, so many injuries today. I never see in my life like this. You know, it was a very, very horrible moment in that particular moment there. People was running. And a lot of people was really doing a great job in handling the best we could at the time.

AARON MATÉ: And, Carlos, you’re being cited in the media as a hero for what you did for the victims. Tell us how you reacted to the bombing.

CARLOS ARREDONDO: Well, it took really few minutes to understand that this was a IED explosion. And my first reaction, being a volunteer for the Red Cross, and my first reaction was to just go, you know, and do my duty. So many people was doing the same thing—police officers, National Guards, people from the stands, veterans. You know, everybody just got together into the side. You know, we didn’t know if it was a third bomb waiting for anybody there, you know, but everybody removed the fence by their hands and pushed everything around. And in a matter of time, everybody was wheeled out to the next 150 yards, you know, emergency area, which was piled with emergency medical service and units. That was a lot of help.

AMY GOODMAN: Carlos, you helped a man. You tied a tourniquet around his leg. You were there because one of the runners was honoring your dead son in Iraq?

CARLOS ARREDONDO: One of the runners was doing it to remember Alexander, and two of the National Guard members start 4:00 a.m. that morning walking. They went—they start going by a little bit around 2:00 in the afternoon. I was right in the street waiting for the one who was running for my son, because they was passing by at around between 2:00 and 3:00. And the explosion happened before 3:00. And fortunately, none of them got hurt.

AMY GOODMAN: But you were helping wounded people.

CARLOS ARREDONDO: I just concentrate in removing the fence to help everybody coming to the scene. And then I concentrate on a young man who lost both of the limbs. I ripped up a T-shirt, and another gentleman helped me out, and we put this tourniquet on the legs. And then the first wheelchair that arrived, you know, I picked him up and put him in the wheelchair, and I dragged him out of there, because only I can do at the time.

AARON MATÉ: And Carlos, what were you telling the victims that you were helping?

AMY GOODMAN: Carlos, you have been through so much in your life. You lost your older son, Alexander, in Iraq. You lost your next son, Brian, who committed suicide a few years later. You’ve been traveling around the country speaking out against violence, and now you witness this and try to save people who were injured.

Mélida, maybe you would like to weigh in here. You have been right at Carlos’s side in your peace activism, in your activism against violence in the world.

AMY GOODMAN: Could you speak right in the phone but not into the speaker phone? Come off speaker phone, because we could hardly hear you. Mélida? Mélida, are you there? Carlos?

MÉLIDA ARREDONDO: To be quite honest, since we lost Brian in December of 2011, Carlos and I have been trying to just stay sane and have been working real hard to promote awareness about suicide, both in the military and among military families. But Carlos was heroic yesterday. I was in the stands right across the street and saw both bombings head on. But the debris did not reach us—thank you, Jesus. And the scene was very, very scary. I was in the top of the stands. I couldn’t walk, and somebody had to help me down the sort of like the football stands. And we’ve been trying to nurture each other, and we’ve been seeing a few more doctors than usual. And it’s taken a toll on us. But I knew when that bomb went off, after the second bomb went off, I knew that Carlos was there, because his training as a first responder—he’s in the disaster relief for the American Red Cross—that’s his instinct, and to go and help. And he’s helped other people who have been injured over the years in fires and things like that through his work.

And so, today it’s been very overwhelming with the calls. I immediately got cold all day. I could not stop shaking from the cold until 2:00 a.m. this morning. And Carlos has been very—crying and traumatized a little bit and—but we’re going on. At the same time, we’re full of adrenaline. So, we’ll be getting in touch with counseling services shortly for ourselves, because—and I recommend anybody who was there to do that. The city of Boston is going to put together counseling services for people who were at the event, and the American Red Cross is going to, or just reach out to local community health centers, which we have several in the area. And—but I am very upset to hear this morning that the little boy—because that’s immediately what I thought of, the children, because this is a family-friendly event. And there were children to elders to every nationality. It’s a very beautiful event. And it was very upsetting to hear that the young child of the Martin family—Martin, I think his first name is—and was killed, eight years old, from the part of Boston that I work in, in Dorchester. And both his mother and sister are severely injured and in the hospitals. So—

AMY GOODMAN: Well, Carlos and Mélida, we want to thank you for being with us, and I’m so sorry we’re speaking to you on such a painful day. Thank you for being there, and, Carlos, as usual, for your heroism. When Carlos learned he lost his son when the Marines came to his door, he set his van on fire, and then he started his journey around the country for peace. And as you heard, Carlos and Mélida lost their son Brian, their second son, last year to suicide.

This is Democracy Now! When we come back, we’ll speak with a doctor and a reporter in Boston. Stay with us.

“Like a War Scene”: From the Streets to Hospitals, Witnesses & Medics Rushed to Help Bombing Victims

NEXT“Like a War Scene”: From the Streets to Hospitals, Witnesses & Medics Rushed to Help Bombing Victims 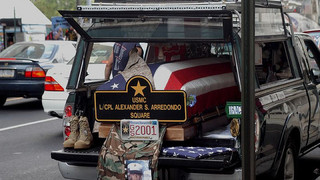