No OSHA Inspections at Texas Plant in 5 Years: Are We Doing Enough to Protect Workplace Safety?

In the wake of the deadly explosion at a Texas fertilizer plant, reporter Mike Elk of In These Times magazine joins us to discuss the plant’s safety record and the troubling regulatory environment for workplaces in Texas and nationwide. The Occupational Safety and Health Administration has not inspected West Fertilizer Co. in five years, and the EPA fined the plant in 2006 for failing to have a risk management plan. Elk says OSHA is understaffed and underfunded nationwide, across all industries. [includes rush transcript]

AMY GOODMAN: I wanted to bring Mike Elk into the discussion. He’s with In These Times magazine. Mike, clearly this anhydrous ammonia is extremely powerful. I mean, back—I think it was 1947, Texas City ship had—thousands died in explosions then. Can you talk about how regulated this plant was, Mike Elk, as you research it?

MIKE ELK: Yeah. So, basically, what’s interesting about this plant is, in the idea of workplace safety, we often talk about the idea of hazards, which is, you identify hazards, and you attempt to try to reduce the ability that those hazards result in accidents like the explosion we saw yesterday. Now, the story that The Dallas Morning News reported, that the plant said that there was no risk of explosion, shows that they did not properly identify the hazard, which led to the explosion, as we all know occurred. This is a big problem.

This kind of plant here, we can tell from the records that we were looking over last night, OSHA has not inspected this plant in at least five years. And that’s not uncommon. This is a non-union facility. The way OSHA typically works, and as well as EPA, is that they get a call from a worker, and then inspectors show up, and they inspect the plant, and they find problems. When you have a non-union workforce, like you have in this plant, that’s a lot less likely, since many folks are scared of losing their jobs. So there hasn’t been an inspection in at least five years, from what we can tell.

JUAN GONZÁLEZ: And the general problem of workplace safety and the government’s ability to inspect plants, for especially catastrophic accidents or accidents that take lives?

MIKE ELK: Yeah. So, every year in the United States, 4,500 Americans die a year in workplace accidents. And yet we only spend approximately $550 million on OSHA’s budget to prevent workplace accidents—on OSHA’s total budget. And when you think about that, when you think about the fact 4,500 Americans die a year in workplace accidents and we only spend $500 million, and then you compare that to the hundreds of billions we spend overseas protecting Americans from acts of terrorism, it seems like there’s some misplaced priorities. At least that’s what workplace safety advocates would say. If you look at OSHA’s budget, OSHA is so severely understaffed. There are 2,200 inspectors in this country, OSHA inspectors, for eight million workplaces. Due to the understaffing of OSHA, OSHA could inspect a plant once every 129 years.

AMY GOODMAN: Of course, OSHA stands for the Occupational Safety and Health Administration. I wanted to read you a quote of Rick Perry, Texas governor, an interview he did just April 9th with Newsmax. He said, “The men and women in Texas know something now after a decade-plus of our governorship and our policies being implemented by a Republican House, Senate, lieutenant governor and speaker. We’ve kept our tax burden as light as we could and still delivered the services that the people of Texas desire, and we have a regulatory climate that is fair and predictable. I cannot tell you how important is predictability and stability in the regulatory climate.” Your response, Mike Elk?

JUAN GONZÁLEZ: And what about Texas in terms of workplace safety compared to other states?

MIKE ELK: Yeah. Texas, as statistics shows, has the highest rate of workplace deaths of any state in the country. And a big part of that can be contributed to the fact that it’s one of the most non-union states in the country. Quite frankly, no worker is going to speak up and call OSHA. OSHA has such a severe limited budget that they typically don’t go and inspect a workplace unless they get a phone call from a worker saying there’s a big problem. And when you’re scared of losing your job, you’re not going to do that. So, places that tend to have less unions tend to have much higher rates of workplace accidents. And as, you know, the West, Texas, accident showed, workplace accidents just don’t hurt workers, they hurt the surrounding community, as well.

AMY GOODMAN: At 6:30 Eastern time this morning, West Mayor Tommy Muska said perhaps 60 homes have been damaged, all the nursing home patients have been accounted for, and all of downtown West, Texas, has been evacuated. Tony Dudik, what are your plans for today?

TONY DUDIK: Well, I’ve got—it’s starting to rain, so there’s not a lot I can do. I also teach here in the Waco area, so I’ve got some teaching activities to tend to, and we’re getting close to final exams, so I’ve got to take care of that. You know, it’s going to take a couple of days for this to sink in. But when it does, it’s going to—it’s going to affect the people in this community and in this part of the state. It’s going to shake people to the core.

AMY GOODMAN: And, Jay Hicks, we’re going to follow your—you on social media. That’s what you’re in charge of at KWTX-TV in Waco, and we’re going to link to your station at democracynow.org. We want to thank you all for being with us on this day following this terrible tragedy.

This is Democracy Now!, democracynow.org, The War and Peace Report. When we come back, we’ll talk about Boston, the Boston Marathon bombings. Stay with us. 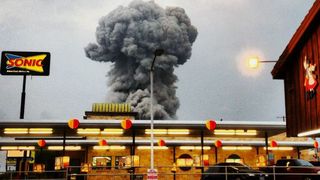