As North Korea threatens to launch a nuclear attack on the United States, the Obama administration is quietly expressing concern its own recent actions may have been too provocative and could inadvertently trigger a deeper crisis. We discuss the latest on North Korea and tensions in the region with Christine Hong, assistant professor at University of California, Santa Cruz, and an executive board member of the Korea Policy Institute. She has spent time in North Korea, including a visit to the country as part of a North American peace delegation. [includes rush transcript]

JUAN GONZÁLEZ: We begin today’s show on the increasing tension between North Korea and the United States. The Wall Street Journal is reporting today the White House is reconsidering its recent aggressive stance toward North Korea out of fear that it could inadvertently trigger an even deeper crisis.

In recent days, North Korea has moved a medium-range missile to its east coast, threatened to launch a nuclear attack on the United States, and threatened to restart its nuclear facilities.

Last month, the U.S. flew stealth bombers capable of carrying nuclear weapons over South Korea. The United States has also sent two guided-missile destroyers to the waters off South Korea and announced plans to deploy an advanced missile defense system to Guam in the next few weeks, two years ahead of schedule.

AMY GOODMAN: The Journal reports the United States is now putting a pause on what several officials described as a step-by-step plan the Obama administration approved earlier this year, dubbed “the playbook,” that laid out the sequence and publicity plans for U.S. shows of force during annual war games with South Korea. One senior administration official said, quote, “The concern was that we were heightening the prospect of misperceptions on the part of the North Koreans, and that that could lead to miscalculations.”

To talk more about the latest on North Korea, we’re joined by Christine Hong, assistant professor at University of California, Santa Cruz, on the executive board of Korea Policy Institute. She has spent time in North Korea, including a visit to the country as part of a North American peace delegation.

Professor Hong, welcome to Democracy Now! Talk about this latest crisis across TV screens last night and people’s texts all over. We were getting breaking news the—North Korea threatening a nuclear attack on the United States.

CHRISTINE HONG: Right. Well, what I’d say is that that news that you actually opened with, which is that the United States has pulled back, leads us to focus not just on North Korea’s threats, but actually what the U.S. was doing and what possible consequences might ensue from that. And I think that we’ve really entered into a new era. I mean, this is no longer a decade ago or even half a decade ago, when denuclearization seemed like an achievable policy. It very well may be the case that we’ve entered into an era in which it’s a fait accompli that North Korea is a de facto nuclear power. Indeed, right now it states that its nuclear deterrent is essential to its sovereignty.

And so, what we were hurtling down, until recently, was a pathway in which the U.S. was, with this “playbook,” basically displaying—having these very sort of hubristic displays of military might. And we were hurtling down a pathway in which one potential solution, so to speak, to North Korean nuclearization would have been a U.S. nuclear first strike against North Korea, which is inconceivable.

And I think that one thing that has been vastly underreported in the U.S. media is the fact that one of the responses that the U.S. probably wasn’t entirely prepared for was the fact that China was amassing forces, military forces, and personnel, vehicles, etc., along the North Korea-China border. And also, you know—and this is reported in Russian news, in Iranian news, in other global news—China also conducted its own live fire drills in the West Sea in a show of support for North Korea. And this, of course, was a kind of direct parallel, definitely not on the sort of scale, size and scope of U.S.-ROK war games, but definitely a kind of counter to those massive war games, which are ongoing right now.

CHRISTINE HONG: I thought that it was very interesting that the article that Amy began with cited Washington’s fear that North Korea might misperceive some of its recent actions, which, until recently, Secretary of Defense Chuck Hagel was describing as “not provocative.” And, you know, I think that if you think about a kind of parallel circumstance—and I think it’s unimaginable for us in the United States to think of this—if you could just imagine, for example, Mexico, with a historic foe of the United States like Russia, conducting massive military exercises south of the United States border and in its surrounding waters and that simulate an invasion of the United States and a joint Mexico and Russian occupation of the United States, including simulations of nuclear first strikes, I mean, it’s difficult to conceive that the U.S. wouldn’t regard that as an act of hostility and aggression. And indeed, North Korea does.

And I think that one thing to know about these war games is that, last year, in the wake of Kim Jong-il’s death, the U.S. implemented something, along with its South Korean ally, called OPLAN 5029. OPLAN 5029 is an operational plan that—you know, and it’s enacted during these war games. And basically, they simulated a regime collapse scenario of North Korea. And when a South Korean official was asked about this, he said that the death of Kim Jong-il represented vulnerability on the part of North Korea, and therefore a good time to implement that type of war scenario.

AMY GOODMAN: I want to play a comment of Defense Secretary Chuck Hagel last Thursday when he rejected assertions the U.S.-South Korean military drills are a provocation.

DEFENSE SECRETARY CHUCK HAGEL: We have security issues here that we have to protect, and commitments and our security interests. So, no, I don’t think we’re doing anything extraordinary or provocative or out of the—out of the orbit of what nations do to protect their own interests and assure, as the general said, especially not only to our South Korean ally, but to our other allies in that region, that we must make clear that these provocations by the North are taken by us very seriously and we’ll respond to that.

CHRISTINE HONG: You know, and this actually goes back to something that Juan was saying, as well. You know, I mean, the Korean War is an unfinished war. It’s the longest ongoing conflict that the U.S. historically has been involved in. This year represents the 60th anniversary of the signing of the armistice, the 1953 Korean War Armistice Agreement, which stipulated that within three months’ time, that the signatories—China, the DPRK and the United States—should sit down at the peace negotiating table and hammer out a permanent peace agreement.

The other stipulation was, or recommendation was, that all foreign forces should be withdrawn from the Korean Peninsula. Fast-forward to the present moment: We are still locked into a state of war with North Korea. China withdrew its forces almost immediately at mid-century. The U.S., to this day, stations 28,500 military personnel on the South Korean Peninsula and operates over 40 military bases there.

And so, you know, when you also look at the history of the ongoing Korean War and you look at the nature of the war at mid-century, a foremost Korean War historian, Bruce Cumings at the University of Chicago, has stated that this war was one in which the U.S. commanded mastery over the skies, and it was an asymmetrical war that resulted in a total of about four million deaths, the majority of which were civilians. And in North Korea alone, North Korea’s statistics for its losses were that it lost 3.5 million people, 70 percent of whom were civilians.

And so, when you’re talking about these kinds of military sorties with B-2 stealth bombers and the possibility of a nuclear strike, which the U.S. has maintained as an option and threatened North Korea over nine times historically, then you have—you have to understand that on the North Korean side, it’s built upon a profound historical and personal understanding of ruin at the hands of the United States. And indeed, that—the bombing campaign that the U.S. historically, you know, waged against North Korea was called by Bruce Cumings a “bombing holocaust,” and he said that the air war was genocidal in nature.

AMY GOODMAN: Very quickly, last question: What do you think could bring peace to the peninsula, to North and South Korea?

CHRISTINE HONG: You know, I think that what could bring peace to the peninsula is seriousness on the part of the United States to deal with a nuclear North Korea, to realize that it is, for all intents and purposes, a fait accompli, and for the U.S. to broker a peace with its historic foe. You know, President Barack Obama came into office saying that he would out—he would stretch out a hand to those enemies of the United States that uncurled their fists.

And as much as the media says that all provocation is on the side of North Korea alone, I think that it’s actually important to recall a message that both former Ambassador to South Korea Donald Gregg and son of Billy Graham, Franklin Graham, had said is a very serious message, and it’s actually Dennis Rodman’s message that he was conveying from Kim Jong-un to Barack Obama and which the White House refused to receive. And the substance of the message was: “I don’t want war. Call me.” And in point of fact, what the U.S. needs to do and what Barack Obama needs to do and has not yet undertaken is a policy of engagement toward North Korea.

AMY GOODMAN: Christine Hong, I want to thank you for being with us, assistant professor at University of California, Santa Cruz, on the executive board of Korea Policy Institute.

This is Democracy Now! When we come back, the “I-word” has been dropped by AP. You’ll find out what that means. 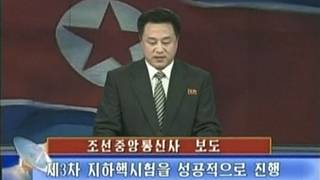