After months of protest, teachers, students and parents in Seattle, Washington, have won their campaign to reject standardized tests in reading and math. In January, teachers at Garfield High School began a boycott of the test, saying it was wasteful and being used unfairly to assess their performance. The boycott spread to other schools, with hundreds of teachers, students and parents participating. Last week, the school district backed down, announcing that the Measures of Academic Progress, or MAP test, is now optional for high schools, but those refusing the test must find another way to gauge student performance. We speak with Jesse Hagopian, a high school history teacher and union representative at Garfield High School.

AMY GOODMAN: We end today’s show looking at the victory for teachers and students in Seattle, Washington, where, following months of protest, high schools there will no longer have to conduct standardized tests in reading and math. Superintendent José Banda says the Measures of Academic Progress, or MAP, test is now optional for high schools, but those refusing the test must find another way to gauge student performance. In January, teachers at Garfield High School began a boycott of the test, saying it was wasteful and being used unfairly to assess their performance. The boycott spread to other schools, with hundreds of teachers, students, parents participating.

For more, we go to Seattle, where we’re joined by Jesse Hagopian, a high school history teacher and union rep at Garfield High. He also served as the Black Student Union’s faculty adviser and is a founding member of Social Equality Educators.

Jesse, welcome back to Democracy Now! Talk about this victory.

JESSE HAGOPIAN: Well, thanks again for having me on the program today.

And this is really a stunning victory for us here in Seattle at Garfield High School and across the city of the high schools boycotting the test. You know, a week ago today, an announcement went out saying that the test would be optional at the high school level, and it led to an eruption of celebration at Garfield, with fist bumps and high fives of teachers and students. And we were celebrating this long struggle. You know, we were threatened with a 10-day suspension without pay, and other consequences. And this was a real vindication.

And, you know, we were celebrating, I think, too, because Washington state ranks number one in the nation in high-stakes testing. And we spend over $100 million a year on these tests. And Garfield High School teachers and teachers around Seattle who have joined the boycott of the MAP test have said that we would rather spend that $100 million on reading coaches and on tutoring programs, things that can actually help elevate our students and get them where we know they need to be.

AMY GOODMAN: Jesse Hagopian, Garfield High School didn’t start this boycott. Explain the origins of it and how it links in with other protests against high-stake testing around the country.

JESSE HAGOPIAN: Well, we’ve seen movements against high-stakes testing all over the nation, you know, from parents opting their students out of these tests across the country to the principals’ associations in New York state saying we’ve had enough of these high-stakes tests.

But I think, in a way, you’re right: Garfield didn’t start the boycott. In my view, the boycott of the MAP test really began with the elite private schools, who never give these tests. They want their students to have access to critical thinking skills and creativity. They want their students to be prepared to be leaders in the world today, and so they don’t inundate their students with these high-stakes tests like they expect to be done in the public schools. So, in that way, you could say this boycott really began of the elite schools. But, in actuality, you know, Garfield, I think, was the first school to unanimously vote, of all the faculty, “we refuse to give this test.”

And it’s a real crisis, I think, for these corporate education reformers, people like Michelle Rhee, who wrote an editorial in The Seattle Times against our boycott. And I think it’s a crisis for them, because their whole system of ed reform rests on these data points, on reducing teaching and learning to a single score that they can use to close schools, like you’re seeing being proposed in Chicago and Philadelphia, that they can use these data points really to degrade education and profit from it and privatize our schools, turning them into charters. And this boycott represents a threat to their ability to reduce teaching and learning to a single score. And I think that’s why you see Michelle Rhee and these corporate education reformers so upset that we stood up to their tests and refused to give them. And I think that’s why so many teachers and parents and students across the nation are celebrating this victory, including the Garfield High School PTSA that voted unanimously to support us.

AMY GOODMAN: Jesse, can you explain what you’re coming up with in its stead?

So we actually formed a teacher work group on assessment, and we had some very dedicated teachers who took time out of their week, every week for the last couple months, to do research, to collaborate and to come up with what we would replace the MAP test with. And it’s an incredible document. People should go to scrapthemap.wordpress.com and take a look at what we would replace the MAP with, and this is assessments that are related to our curriculum, assessments that actually measure many different skills rather than just your ability to fill in a bubble A, B, C or D, assessments like performance-based assessments, what you do when you get a Ph.D. You do research; you defend that research in front of a panel of experts. And I think that can be adapted for all grade levels and all subjects. And you get at a lot of different skills that you don’t get at with the simple standardized testing. And I’m really—

AMY GOODMAN: Jesse Hagopian, we’re going to have to leave it there, but I want to thank you so much for being with us, high school history teacher, union rep at Garfield High School.

That does it for the show. Check our website for fellowships and job listings. 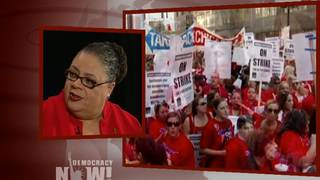