Just hours after pro-choice advocates and lawmakers defeated a bill that would have shut down nearly all abortion clinics in Texas, Gov. Rick Perry announced he is reviving the bill by calling another special session of the legislature on July 1. “I am calling the legislature back into session because too much important work remains undone for the people of Texas,” Perry said. “Texans value life and want to protect women and the unborn.” Perry’s move could overrule the efforts of Texas State Senator Wendy Davis, who led a filibuster that lasted nearly 11 hours before Republicans cut her off. That was when her colleagues and the protesters in the gallery took over. Democrats raised objections, and protesters raised their voices, drowning out the proceedings in the final minutes before the session officially ended at midnight. Republicans claimed they had passed the bill anyway, but Lieutenant Gov. David Dewhurst finally conceded the vote had come too late, blaming what he called an “unruly mob using Occupy Wall Street tactics.” Those who were on the ground prefer to call it “a people’s filibuster.” We’re joined by Planned Parenthood Federation of America President Cecile Richards, who was there to announce Wednesday’s victory in the Capitol rotunda, which holds a portrait of her mother, the late Texas Governor Ann Richards, another staunch advocate for women’s rights. “This is the most extreme bill I know that we’re fighting in the country,” Richards says. “[Gov. Perry] is putting his own political agenda ahead of the women of Texas.”

JUAN GONZÁLEZ: We end today’s show with this week’s showdown over abortion rights in Texas. Pro-choice advocates and Democratic lawmakers waged a battle into the early hours of Wednesday morning to successfully block a bill that would have forced nearly all of the state’s abortion clinics to close. Planned Parenthood President Cecile Richards read the victory message from Texas State Senator Wendy Davis to protesters in the Capitol rotunda Wednesday just after 3:00 a.m.

CECILE RICHARDS: This is straight from Senator Wendy Davis, OK? Hold your applause. First, I love you guys. OK? We love you, too, Wendy! So, the lieutenant governor has agreed that SB5 is dead.

AMY GOODMAN: But the victory was short-lived. Later that day, which was yesterday, Texas Governor Rick Perry announced he was calling the Legislature into another special session on July 1st so they can revive the anti-abortion bill. He said, quote, “I am calling the Legislature back into session because too much important work remains undone for the people of Texas,” adding, “Texans value life and want to protect women and the unborn.”

JUAN GONZÁLEZ: Perry’s move could overrule the efforts of Texas State Senator Wendy Davis, who rose to her feet in pink sneakers Tuesday morning to launch what she intended to be a 13-hour filibuster. During that time, she would not be allowed to eat, drink, stray from the topic or lean on anything.

SEN. WENDY DAVIS: Members, I’m rising on the floor today to humbly give voice to thousands of Texans who have been ignored.

AMY GOODMAN: Wendy Davis’s filibuster lasted nearly 11 hours before Republicans cut her off. That was when her colleagues and the protesters in the gallery took over. Hundreds of people raised their voices, while Democrats raised multiple objections, including this one by State Senator Leticia Van de Putte, who had just returned from her father’s funeral.

SEN. LETICIA VAN DE PUTTE: At what point must a female senator raise her hand or her voice to be recognized over the male colleagues in the room?

JUAN GONZÁLEZ: Protesters sustained their cheering for roughly 15 minutes, drowning out the proceedings until the midnight deadline had passed and the special session was officially over. But Republican lawmakers claimed they had passed the bill anyway. The Texas Legislature website originally showed the bill passed on June 26th, after midnight. Journalists with The Texas Tribune and other media outlets took screen grabs of the site minutes later, after it had been changed to say that the bill passed on June 25th, before the deadline.

AMY GOODMAN: Around 3:00 a.m., Lieutenant Governor David Dewhurst conceded the vote was illegitimate, blaming what he termed a, quote, “unruly mob using Occupy Wall Street tactics,” or what those on the ground preferred to call “a people’s filibuster.”

To talk more about the protest and what comes next, we’re joined by Planned Parenthood Federation of America and Planned Parenthood Action Fund President Cecile Richards. She was there to announce the victory in the Capitol rotunda, where there is a portrait of her mother, the late Texas Governor Ann Richards, another staunch advocate for women’s rights.

AMY GOODMAN: Well, talk about the people’s filibuster and what actually took place, this rare moment.

CECILE RICHARDS: Well, it’s been amazing, this entire journey. I think, you know, Governor Perry tried to get this bill through in a regular session; could not, because it’s not supported by the people of Texas, so called a special session, in which they have absolutely changed every rule in the book, suspended the rules of the Senate, in order to try to cram it through. And what you saw, you know, a day ago, is that the people turned out, hundreds, more than thousand—thousands of people, actually, came to the Capitol to protest this bill. And ultimately it didn’t pass.

JUAN GONZÁLEZ: He want a do-over.

CECILE RICHARDS: That’s right. He doesn’t—I mean, he’s not giving up. And I think this is—look, he is putting his own political agenda ahead of the women of Texas. Obviously this is a devastating bill for women’s health in the state of Texas. And all the polls show people of Texas don’t support the bill. They want the Legislature to move on to more important topics. And it’s very clear—there was just a poll out that showed that only a third of the people of Texas trust this Legislature and this governor when it comes to women and women’s health.

AMY GOODMAN: You know, there you were in the rotunda. You were announcing to hundreds of people that the bill actually did not pass, and you were standing under the portrait of your mother. And we wanted to go to your mother, the late governor of Texas from 1991 to '95, before George W. Bush, before that, state treasurer, and delivered the keynote address at the 1998 Democratic National Convention. This is Ann Richards interviewed by James Henson of the Texas Politics Project in 2003, three years before her death. He asked her whether she felt her many years of work on the issue of women's rights had been successful.

ANN RICHARDS: There’s no question that the very fact that young women have the same opportunity in college, that they have a chance to play sports because of Title IX, that they have the right to terminate a pregnancy that doesn’t make sense in their life or for the life of a child, the fact that we have equal opportunity in the workplace, all those things would never have happened if those of us who were participants of the women’s movement had not been there and fought so hard.

ANN RICHARDS: Oh, I’m hardly satisfied. I’m outraged most of the time at how the progress seems to stall, how difficult it is for young people to realize that their very freedoms are in jeopardy if they are not willing to fight for them. But you also have to look back and accept and be pleased that things have changed. My grandmother, during a period of her life, did not have the right to vote. The law in Texas was that idiots, imbeciles, the insane and women could not vote. And less than one generation later, I was the governor of Texas.

AMY GOODMAN: Talk about the significance of this bill that we’re talking about. What does it mean for Texas?

CECILE RICHARDS: I mean, this is the most extreme bill I know that we’re fighting in the country. This would literally mean that dozens of healthcare providers that provide safe and legal abortion in Texas would be forced to close. We’ll probably be down to five health centers.

AMY GOODMAN: Out of how many?

CECILE RICHARDS: Out of now more than 40. And, literally, if you look at the map, it means women who live in West Texas, South Texas, will have to drive hundreds of miles to find a healthcare provider. And that’s sort of the outrageous thing about this bill. It has nothing to do with women’s health. It has nothing to do with helping women. Literally—it has been stated, and Lieutenant Governor Dewhurst has been very clear—this is about shutting down women’s health centers.

JUAN GONZÁLEZ: And, ironically, Wendy Davis, the state senator who led the charge, would not even be in office had not the Justice Department invalidated the redistricting under the Voting Rights Act of Republicans who tried to eliminate minority voters from her district who overwhelmingly voted for her.

CECILE RICHARDS: Juan, you’re exactly right. I mean, look, they have been out to get Wendy Davis, the Republican Party has been, and you can see why. She is the most effective leader for women, for folks all over the state. I imagine they’ll try again, but, boy, I feel like, you know, the fuse was lit the other night in Texas, and folks aren’t going back.

AMY GOODMAN: Are we going to see another woman governor in Texas?

CECILE RICHARDS: Look, a lot of folks would say it’s about time, and nothing would please Mom more.

AMY GOODMAN: Well, we will of course continue to follow this issue in Texas, the people’s filibuster. Cecile Richards is president of the Planned Parenthood Federation of America. 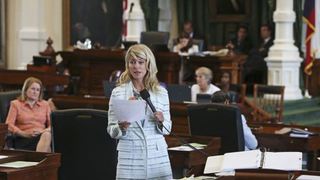