More than 200 people have been arrested at “Solidarity Sing Along,” an ongoing protest at the Wisconsin state capitol against Republican Gov. Scott Walker. On Thursday, Matthew Rothschild, editor and publisher of The Progressive magazine, was detained while covering one of the protests. Rothschild was charged with misdemeanor obstruction and resisting arrest after photographing the arrests of other demonstrators singing in the rotunda.

AMY GOODMAN: We end today’s show in Madison, Wisconsin, with Matt Rothschild, editor and publisher of The Progressive magazine. He was arrested Thursday when covering a protest at the Wisconsin Capitol against Governor Scott Walker. Matt Rothschild was arrested on a misdemeanor obstruction and resisting arrest charge and released on $300 bail after photographing the arrests of other demonstrators singing in the rotunda. He wrote about the experience in an article called “[Governor Scott] Walker’s Cop Nabs Me for Being a Reporter.” Matthew Rothschild joins us now via Democracy Now! video stream.

MATTHEW ROTHSCHILD: Hi, Amy. Thanks for having me on.

Well, it was kind of crazy on Thursday. It’s been crazy in Madison for two-and-a-half years now, and it got crazier in the last three weeks because Scott Walker’s Capitol cops have started to crack down on these Solidarity Singers. The Solidarity Singers have been singing in the Capitol—they should be in the Guinness Book of World Records. They’ve been there for two-and-a-half years now, every day, Monday through Friday. Fridays, they go outside. On Thursday, they were inside, and I was there. I’ve been covering them over the last two-and-a-half years. And over the last three weeks, I’ve been down there six or seven times.

So, I went there with my reporter’s pad and my—you know, my iPhone, doing what we do as reporters. I was taking pictures of people with interesting signs and then taking quotes from the people who were carrying those signs. And then the cops came in and started to arrest one of these Raging Grannies, elderly women who have been active around the country singing protest songs at demonstrations. And one of these Raging Grannies, I happen to know. Her name is Bonnie Block. So, whenever the police are arresting people, I get out my iPhone and take pictures. I was doing that, and then they were moving Bonnie Block out down a hallway toward an elevator—this is in the Capitol, a public space—and I was following them down there, and I was taking pictures. And they said, “You can’t come here.” And I said, “Well, you know, I’m a reporter. I’m with The Progressive magazine.” They said, “No, you can’t come here.” I said, “I’m with the press. I have a right to be here.”

And with that, I didn’t get another word out, because they grabbed my hands, put them behind my back and handcuffed me right then and there. And then they took me to the basement of the Capitol and held me ’til all the protesters they were arresting had been processed. And then they put me in a police car and took me to the Dane County jail and photographed me and took my fingerprints and put me in a holding cell with three other inmates for about an hour and 20 minutes.

MATTHEW ROTHSCHILD: Well, then they let me go on $300 bond. They actually added a $15 processing fee that I’m never going to get back. And they gave me a court date for September 23rd.

AMY GOODMAN: Matt, I was watching this morning Governor Scott Walker on MSNBC, and he was being hailed, and he was talking about taking the state from—I think he said something like—what was the debt, three-and-a-half-billion-dollar debt to one-half billion in the black right now, and coming for the increasing bond rating for Wisconsin. What does that all mean?

MATTHEW ROTHSCHILD: Well, he’s getting ready to run for president, if you can believe that. And it’s horrifying for anyone who’s been living here in Wisconsin or anyone watching what he’s done to the state. He is devastating the state. He can talk all he wants, but, you know, he was—he is ruining what used to be a pretty decent state here. He has cut Medicaid. He’s cutting abortion rights. He’s let the mining companies write their own law, and it’s going to destroy the environment in the northern parts of the state, including on Native American land. And it’s just an all-out assault on progressivism here. And I don’t think he’s going to win, but I think with every one of these arrests, maybe he’s raising money from the Koch brothers. Who knows?

MATTHEW ROTHSCHILD: Well, Scott Walker is a puppet of the American Legislative Exchange Council, ALEC, and of the Koch brothers. And he has occasioned huge protests here, record protests here. And these Solidarity Singers are the remnant of those 100,000 people who were around the Capital Square in Madison back in February and March of 2011. But there are going to be more people there today. Today, I understand, there will be a lot of union members joining the protest. These protests aren’t going away. And, actually, since Scott Walker started to crack down, he’s arrested more than 200 people over the last three weeks. The protests haven’t dwindled; they’ve quadrupled, and sometimes as large as 250 people, when there were, you know, less than 40 people there before. And today there are supposed to be about a thousand people there. So, he’s not succeeding, but maybe that was—maybe that was by design. Maybe he thinks the more he has confrontations with protesters, the better it is for his presidential aspirations. Who knows?

AMY GOODMAN: Matt, very quickly, in terms of treatment of reporters, you’ve also written about what happened to Glenn Greenwald’s partner, David Miranda, as he was coming back from—through Heathrow Airport, held for the longest he could be held without charge, nine hours, when they took his phone, they took his laptops. Glenn Greenwald, of course, famous for writing the articles based on Ed Snowden’s leaks. The significance here?

MATTHEW ROTHSCHILD: It’s absolutely outrageous. And it tells me, and it should tell all of us, that there’s this huge assault on freedom of the press, and that British security forces, probably under direction from U.S. security forces, are after Glenn Greenwald. And now, instead of going after Glenn Greenwald, which would have been outrageous in its own right, they’re going after his partner, his lover, which is, as Glenn Greenwald pointed out, absolutely disgusting and something that the Mafia even wouldn’t do. And we need to tell everyone who believes in free press to protest what the British government is doing, and stand up for Glenn Greenwald. Too many people in the United States in prestigious jobs in the U.S. media have been snarky about Glenn Greenwald for so long, and he should get a prize for this Snowden report, and he needs to be defended right now. All of our freedoms of the speech and of the press need to be defended from the national surveillance state, the international surveillance state.

MATTHEW ROTHSCHILD: He should be fired. No reporter, no journalist, no pundit, who has any respect for the First Amendment, should beg for the killing of a whistleblower.

AMY GOODMAN: Matt Rothschild, we have to leave it there. 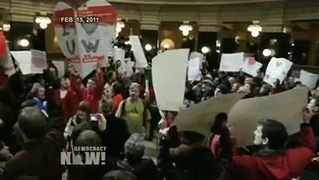