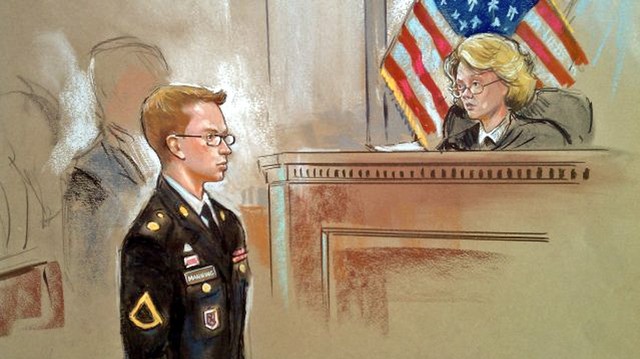 A military judge has sentenced Army whistleblower Bradley Manning to 35 years. Below are comments from legal and human rights organizations:

The Center for Constitutional Rights:

We are outraged that a whistleblower and a patriot has been sentenced on a conviction under the Espionage Act. The government has stretched this archaic and discredited law to send an unmistakable warning to potential whistleblowers and journalists willing to publish their information. We can only hope that Manning’s courage will continue to inspire others who witness state crimes to speak up.

This show trial was a frontal assault on the First Amendment, from the way the prosecution twisted Manning’s actions to blur the distinction between whistleblowing and spying to the government’s tireless efforts to obstruct media coverage of the proceedings. It is a travesty of justice that Manning, who helped bring to light the criminality of U.S. forces in Iraq and Afghanistan, is being punished while the alleged perpetrators of the crimes he exposed are not even investigated. Every aspect of this case sets a dangerous precedent for future prosecutions of whistleblowers – who play an essential role in democratic government by telling us the truth about government wrongdoing – and we fear for the future of our country in the wake of this case.

We must channel our outrage and continue building political pressure for Manning’s freedom. President Obama should pardon Bradley Manning, and if he refuses, a presidential pardon must be an election issue in 2016.

When a soldier who shared information with the press and public is punished far more harshly than others who tortured prisoners and killed civilians, something is seriously wrong with our justice system. A legal system that doesn’t distinguish between leaks to the press in the public interest and treason against the nation will not only produce unjust results, but will deprive the public of critical information that is necessary for democratic accountability. This is a sad day for Bradley Manning, but it’s also a sad day for all Americans who depend on brave whistleblowers and a free press for a fully informed public debate.

Bradley Manning acted on the belief that he could spark a meaningful public debate on the costs of war, and specifically on the conduct of the US military in Iraq and Afghanistan. His revelations included reports on battlefield detentions and previously unseen footage of journalists and other civilians being killed in US helicopter attacks, information which should always have been subject to public scrutiny.

Instead of fighting tooth and nail to lock him up for the equivalent of several life sentences, the US government should turn its attention to investigating and delivering justice for the serious human rights abuses committed by its officials in the name of countering terror.

Manning had already pleaded guilty to leaking information, so for the US to have continued prosecuting him under the Espionage Act, even charging him with ‘aiding the enemy,’ can only be seen as a harsh warning to anyone else tempted to expose government wrongdoing. More than anything else, the case shows the urgent need to reform the USA’s antiquated Espionage Act and strengthen protections for those who reveal information that the public has a need and a right to know.

Bradley Manning should be shown clemency in recognition of his motives for acting as he did, the treatment he endured in his early pre-trial detention, and the due process shortcomings during his trial. The President doesn’t need to wait for this sentence to be appealed to commute it; he can and should do so right now.

Watch/Read past Democracy Now! coverage on Bradley Manning and WikiLeaks

StoryOct 16, 2020Dark Money & Barrett Nomination: The Link Between Big Polluters & the War on ACA, Roe & LGBT Rights
The original content of this program is licensed under a Creative Commons Attribution-Noncommercial-No Derivative Works 3.0 United States License. Please attribute legal copies of this work to democracynow.org. Some of the work(s) that this program incorporates, however, may be separately licensed. For further information or additional permissions, contact us.