Fifty years ago this week, four young girls — Denise McNair, Carole Robertson, Cynthia Wesley and Addie Mae Collins — were killed when the Ku Klux Klan bombed the 16th Street Baptist Church in Birmingham, Alabama. The bombing came less than a month after the landmark March on Washington for Jobs and Freedom. Hundreds gathered in the nation’s capital last week to honor their memory when lawmakers posthumously awarded the girls the Congressional Gold Medal. We’re joined by Addie Mae’s sister, Sarah Collins Rudolph, who is often referred to as the bombing’s “fifth victim.” Just 12 years old when the church was attacked, Collins Rudolph was hit with shards of glass, lost an eye and was hospitalized for months. Today, she continues to live in Birmingham, suffering from the physical, mental and emotional effects of the bombing. She says she has yet to receive any compensation. Click here to watch Part 2 of this interview.

AMY GOODMAN: “Birmingham Sunday,” sung by Joan Baez. You can go to our website to see Monday’s segment featuring Angela Davis speaking about the Birmingham church bombing. She grew up near Birmingham and knew two of the little girls who were killed. We also have an in-depth page that features all of our recent interviews about the civil rights movement in the pivotal year of 1963. This is Democracy Now!, democracynow.org, The War and Peace Report. I’m Amy Goodman, with Aaron Maté.

AARON MATÉ: Well, Denise McNair, Carole Robertson, Cynthia Wesley and Addie Mae Collins, those are the names of the four young girls who were killed 50 years ago this week, September 15th, 1963, when the Ku Klux Klan bombed the 16th Street Baptist Church in Birmingham, Alabama. The bombing came less than a month after the March on Washington. Denise was 11 years old. Carole, Cynthia and Addie Mae were all 14. Hundreds gathered in the nation’s capital last week to honor their memory, when lawmakers awarded the girls the Congressional Gold Medal.

AMY GOODMAN: Well, today our guest is a woman who is often referred to as the fifth victim of the bombing. Sarah Collins Rudolph was 12 years old when the church was attacked. She was standing next to her sister, Addie Mae Collins. Sarah Collins Rudolph was hit with shards of glass, lost an eye, was hospitalized for months. Today she continues to live in Birmingham, Alabama, where she joins us now.

It’s such an honor to have you with us today, Sarah Collins Rudolph. Can you talk about that day 50 years ago, where you were when the dynamite exploded?

SARAH COLLINS RUDOLPH: Yes. I was in the ladies’ lounge when the bomb went off. You know, I remember Cynthia, Denise and Carole walking inside the lounge area and went in where the stalls was. So when they came out, Denise passed by Addie and asked my sister to tie the sash on her dress. And I was across from them at the sink. And when Denise asked her to tie the sash, and I was looking at her when she began to tie it, and then all of a sudden, boom! I never did see her finish it, finish tying it. So, all I could do was say, call out, “Jesus!” because I didn’t know what that loud sound was. And then I called my sister, “Addie! Addie! Addie!” And she didn’t answer me. So, I thought that they had—the girls had ran on the other side of the church where the Sunday school area was.

But all of a sudden I heard a voice outside saying, “Somebody bombed the 16th Street church!” And it was so clear to me, as though that this person was right there, but they was outside where the crater was, a bomb in the church—where it bombed the hole there. And all the debris came rushing in, and I was hit in my face with glass and also in my—both eyes. Well, when the man came in—his name’s Samuel Rutledge—he came in and picked me up and carried me out of the crater, and the ambulance was out there waiting. And they rushed me to Hillman Hospital, which they changed the name. It’s now UAB Hospital.

And while I was there, my sister came in, Janie. She came in, and I asked her where was Addie. And she said that Addie had hurt her back, but she would be here tomorrow to see me. So they rushed me on up to the operating room, and they operated on both of my eyes and took the glass from out of my face. And I had glass in my chest and stomach. So they operated on me. And when I went back to the room—and I stayed there in the hospital for about two-and-a-half months. But at that time, when they took the bandages off my eyes, the doctor asked me what do I see out of my right eye. I told him I couldn’t see anything out of my right eye. And when he took it off my left eye, all I could see was just a little light.

AMY GOODMAN: I’m so glad that you were able to join us today. We wanted you over the past few days, but you work as a maid in Birmingham, and this is your day off. Can we talk about compensation? Did you ever receive compensation for what happened to you?

SARAH COLLINS RUDOLPH: No, I haven’t received anything yet. I don’t know why, but I have been seeking for compensation for years, and—but I never did get anything. And looked like the people just looked over me. They didn’t realize that being in a bomb at the age of 12, I lost a lot of things, you know, concerning my health, you know. And also I wanted to be a nurse, but by having post-traumatic stress syndrome, that never did happen, because that bomb just really changed my whole life. And I had to work as being a maid simply because I wasn’t as smart as I were, because at first, before the bomb, I was an A student, but after the bomb, I just couldn’t think like that anymore.

AMY GOODMAN: And, of course, you lost your sister, as well, Addie Mae Collins, your older sister. You were 12. She was 14. Did you feel you could not find a safe place? I mean, after all, you were bombed in a church, the place you went for sanctuary.

SARAH COLLINS RUDOLPH: Yes, you would think that going to church is really a safe place, but it wasn’t. You know, somebody that would put a bomb in a church and kill four innocent girls, you know, that’s just the work of the devil, because that shouldn’t never have happened. These girls was young, and we was waiting that day for a youth service. But by the bomb going off, we didn’t get a chance to attend youth service.

AARON MATÉ: And, Ms. Rudolph, how does it feel when you hear that people say that this bombing helped set off the civil rights movement?

SARAH COLLINS RUDOLPH: You know, I’ve—yes, I’ve been hearing that for a long time, but for people to just get peace from four girls getting killed, that should never be. You know, we should always just love each other anyway, because we’re all human being, and God made us all. And by them getting killed, that was just something awful. You know, I think about it all the time, that we should have peace. We should love one another, because we shouldn’t be prejudiced and violent like that to place a bomb in a church simply because of people’s race.

AMY GOODMAN: Sarah Collins Rudolph, we’re also joined by Adam Goldman. We were just talking to him about the New York Police Department. But, Adam, before you were at AP, you were at Birmingham News. We only have a minute. Talk about who did this and your correspondence with the killer.

ADAM GOLDMAN: Right, so when I was a reporter there for the Birmingham News, I covered the trial of Thomas Blanton Jr. He was one of three people who were convicted of carrying out this horrific bombing. Thomas Blanton is the only surviving bomber. The other two guys, Bobby Cherry and an individual named Chambliss, they’re dead. And Blanton was put away in prison. He got a life sentence. And I’ve been corresponding with him, trading letters with Blanton. And he’s unrepentant and 'til to this day says he didn't have anything to do with this bombing.

SARAH COLLINS RUDOLPH: You know, during that time, I really didn’t even know they had offered me a gold medal, until last week. Somebody was telling me about—it was in the USA. And I said, “No.” I said, “I never did see that article about they was going to present me with a bomb—I mean, with a medal.” I thought that just my sister and the other girls were going to get the medal. Well, why I said—the reason why I said—

AMY GOODMAN: Well, I have to leave it there, but we’ll continue this conversation after the show. I want to thank you so much for being with us, Sarah Collins Rudolph.

“A Stain on the Legacy of Birmingham”: 1963 Church Bombing Survivor Struggles to Pay Medical Bills 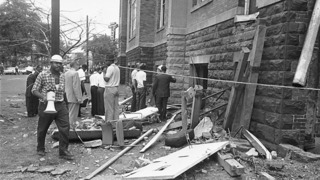 “A Stain on the Legacy of Birmingham”: 1963 Church Bombing Survivor Struggles to Pay Medical Bills