In his latest article for Rolling Stone, Matt Taibbi reports that Wall Street firms are now making millions in profits off of public pension funds nationwide. “Essentially it is a wealth transfer from teachers, cops and firemen to billionaire hedge funders,” Taibbi says. “Pension funds are one of the last great, unguarded piles of money in this country, and there are going to be all sort of operators that are trying to get their hands on that money.”

AMY GOODMAN: Well, Matt Taibbi joins us here in our studio. Explain how the pension funds are being looted.

MATT TAIBBI: Well, the primary focus of my piece—there are a couple of things. Number one, how did these funds come to be broke in the first place? I think everybody realizes that states are in fiscal crises or having trouble paying out their obligations to workers. One of the reasons is that states—at least 14 states have not been making their annual required contributions to the pension fund for years and years and years. So, essentially, they’ve been illegally borrowing from these pension funds, sometimes going back decades.

But another focus of the piece was, the solution that a lot of sort of Wall Street-funded think tanks are coming up with now is to put—is to get higher returns by putting these funds into alternative investments, like hedge funds. And in a lot of cases, what I’m finding is that the fees that states are paying for these new hedge funds and these new types of alternative investments are actually roughly equal to the cuts that they’re taking from workers. Like in the state of Rhode Island, for instance, they have frozen the cost-of-living adjustment, and the frozen COLA roughly equals the fees that they’re paying to hedge funds in that state. And we’re finding—so, essentially, it’s a wealth transfer from teachers, cops and firemen to billionaire hedge funders.

JUAN GONZÁLEZ: —basically in bonds, because they knew that this was retirement money of workers that they couldn’t risk.

JUAN GONZÁLEZ: But increasingly then, over the last 20, 30 years, they’ve shifted more and more of their money into the stock markets—

JUAN GONZÁLEZ: —so, to the gambling of the stock market, so when the market went down then suddenly the investment returns of these pension funds went down, and they were stuck then, because they were projecting continued increases on those returns.

MATT TAIBBI: Sure, yeah, no, and among the problems here is that state and municipal pension funds are actually not covered by ERISA, which is the federal law governing pensions. So there’s no prudent man rule that requires a certain level of reasonability or prudence in investment. Hedge funds probably would not have been a typical public or municipal investment a long time ago, but, you know, now they’re being used—in some cases, 10, 15, 20 percent of these state funds are being put into these alternative investments. And if you look on the prospectuses of a lot of these investments, they say right in the front, in huge letters, “These are high-risk investments. You may lose everything.” It’s exactly the opposite of what you want to put public money into.

MATT TAIBBI: So John Arnold is a former Enron energy commodities trader who became a billionaire, one of the world’s most successful commodity traders after the collapse of Enron. And he’s sort of the new Koch brothers figure. He is on a crusade. He’s created something called the Arnold Foundation, which is funding pension reform efforts in multiple states all across the country, you know, from Montana to Kentucky, to Florida, to Rhode Island, where I spend a lot of time. In Rhode Island, Arnold donated a lot of money to a 501(c)(4) organization called Engage Rhode Island, which helped promote the pension reform policies of the sort of Wall Street-friendly treasurer they have in that state. And this is sort of the new formula, is you have—in the Citizens United age, you have some person, a hedge fund guy like John Arnold, who gives a whole bunch of money to some shadowy organization, which advertises this crisis that we can’t afford to pay workers anymore, so we have to do things differently: We’ve got to make cuts, and then we’ve got to put all the money in Wall Street-managed funds. And that’s—and that’s sort of his playbook.

JUAN GONZÁLEZ: I’d like to ask you about Detroit, obviously the biggest bankruptcy that we know of in recent modern times in the United States for a municipality, and we have the situation of the pension funds there under threat—big front-page story in The New York Times today. But the average retiree from the Detroit government is receiving a pension of $19,000 a year.

JUAN GONZÁLEZ: We’re not talking about golden parachutes here, yet these are the very pension funds that are now under attack.

MATT TAIBBI: Sure. Yeah, there’s a huge corruption case that just broke open this morning. And, you know, what I would say about that is, you know, what did Willie Sutton say about why he robbed banks? That’s where the money is. Look, pension funds are sort of the last great, big, unguarded piles of money in this country, and there are going to be all sorts of operators who are trying to get their hands on that money. During the crisis era, it was Wall Street banks who were essentially looting these funds by selling them toxic, fraudulent mortgage-backed securities. In Detroit, it was the workers themselves who were taking the money. They were giving themselves what they called 13th checks, essentially taking advances out on their own money. But across the country, the more typical narrative is not, you know, some worker who’s making $19,000 who’s really making out in this kind of corruption; it’s a hedge fund who’s making $50 and $60 million in fees managing state funds. And that’s the much more typical narrative.

AMY GOODMAN: Matt, you had a piece earlier, “16 Major Firms May Have Received Early Data From Thomson Reuters.”

MATT TAIBBI: Mm-hmm, yeah. Well, that story came out actually earlier this year. There was a whistleblower who worked at Thomson Reuters. There was a key economic indicator that Thomson Reuters is contracted to—with the University of Michigan to release. It affects the Fed’s projections and some of the Fed’s moves. If you have early access to that data, you definitely have a trading advantage. And it’s subsequently come out that some firms—16 of the biggest banks and hedge funds in the world—have been getting that data up to an hour early. Those names are going to be—

AMY GOODMAN: And that means?

MATT TAIBBI: And that means that they are able to trade ahead of that information. You know, there’s—I spoke with a market research firm who looked at the trading data, and he said, “Look, you’re seeing these huge spikes in activity just before the data is officially released,” which means that there are a whole bunch of people who have a lot of money who are gambling on inside information, and this is—this is going on all over the place.

AMY GOODMAN: Matt Taibbi, we’re going to have to leave it there, contributing editor for Rolling Stone magazine. We’ll link to your piece in Rolling Stone; it hits the stands Friday. It’s called “Looting the Pension Funds: Five Years After the Financial Crisis, Wall Street Is Picking at the Carcass of Flat-Broke City and State Governments, Blaming Public Workers and Making Millions to 'Rescue' Them.” 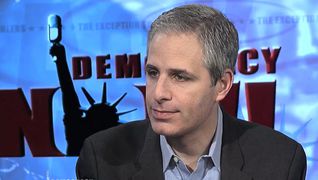