Thirty Greenpeace activists remain jailed in Russia facing possible piracy charges after they attempted to board Russia’s first Arctic offshore oil rig. Many of the activists are appearing in a Russian court today, facing up to 15 years in prison if Russian prosecutors bring threatened piracy charges. We’re joined by Greenpeace Executive Director Kumi Naidoo, who took part in a similar action against oil drilling in the Arctic last year. “This is a disproportionate use of state authority to try to silence of every important global conversation that needs to be had,” Naidoo says. “We are reaching the tipping point on climate. The Arctic serves as a refrigerator and an air conditioner of the planet. And rather than treating the warming sea ice during the summer months as a warning sign that we need to get serious about climate change, sadly Western oil companies like Exxon, Shell and so on are partnering with Russian-owned companies to go and try to drill for the last drops of oil in this most fragile, remote and risky environment.”

JUAN GONZÁLEZ: Thirty activists with Greenpeace remain jailed in Russia and face possible piracy charges one week after they were detained during a peaceful protest against Arctic oil drilling. Many of the Greenpeace activists are appearing in a Russian court today. A freelance photographer and a Greenpeace spokesperson, Roman Dolgov, have just been ordered to be jailed for two months.

AMY GOODMAN: A day later, armed Russian coast guards descended on Greenpeace’s main ship, the Arctic Sunrise, using a helicopter and ropes. They reportedly lined up the majority of the 30 activists on board and held them at gunpoint on their knees on the ship’s deck. Officials then towed the boat and its occupants to the port of Murmansk, where the activists were held incommunicado and questioned by investigators. On Tuesday, Russia’s top investigative agency said it would prosecute the Greenpeace activists on piracy charges. If convicted, the activists could face up to 15 years in prison.

On Wednesday, Russian President Vladimir Putin defended the Russian coast guard’s decision to apprehend the Greenpeace activists. He spoke at an international conference on the Arctic.

PRESIDENT VLADIMIR PUTIN: [translated] It would be better if Greenpeace representatives sat with us together in this hall and told us what they think about the problems we’re discussing. They could state their complaints, demands and concerns. No one is trying to brush them aside. We gather for meetings like this specifically to discuss such problems. It’s obvious they are not pirates, but they tried to storm the platform. Our security forces and border troops did not know who exactly was trying to seize the platform under the Greenpeace guise. It’s obvious these people violated international law by coming dangerously close to the platform.

SERGEI NIKITIN: [translated] Piracy charges are totally fabricated and do not have any legal basis. They are absolutely baseless. We are calling on the Russian authorities to drop these charges against the Greenpeace activists, who used their right to a peaceful protest. Let me stress that the activists who protested against oil drilling in the Arctic did not possess any weapons.

AMY GOODMAN: For more, we’re joined by Kumi Naidoo. He’s the executive director of Greenpeace International. In 2012, he participated in a similar action against oil drilling in the Arctic.

Kumi Naidoo, it’s great to have you in our studios here at Democracy Now!

KUMI NAIDOO: Thank you, Amy. It’s good to be here.

AMY GOODMAN: I should say in our LEED Platinum studios—

AMY GOODMAN: —the highest rating you can get in green building.

KUMI NAIDOO: Yes, congratulations on that.

AMY GOODMAN: Explain to us what is happening right now in the Arctic.

KUMI NAIDOO: As we sit now, the activists are in court. Already, we know that five activists—two from Russia, one from Canada, New Zealand and Poland—have already been sentenced to what is euphemistically called pretrial detention, which is basically detention without trial, for two months. And the charges that they are being investigated are actually piracy. In the words of one of the people, Denis Sinyakov, a Russian colleague, who is the photographer on board, he said, “The criminal activity I am blamed for is called journalism. I will continue doing it.” And that captures very well what we are seeing here.

This is a disproportionate use of state authority to try to silence off a very important global conversation that needs to be had, because right now we are reaching the tipping points on climate. The Arctic serves as a refrigerator and air conditioner of the planet, and rather than seeing the retreating of the Arctic sea ice during the summer months as a warning sign that we have to get serious about climate change, sadly, Western oil companies like Exxon and Shell and so on are partnering with Russian state-owned companies to actually go and try to drill for the last drops of oil in this most fragile, remote and risky environment for such activities.

JUAN GONZÁLEZ: And talk about the Russian decision to begin exploration. How recent is it, and what are the plans in terms of how extensive they expect it to be?

KUMI NAIDOO: The plans are pretty extensive. It is, sadly, a key part of the Russian government’s economic strategy, actually, to harness the hydrocarbons of fossil fuels in the Arctic. Why this particular facility is important is that even though there are many explorations going on by different companies in different parts of the Arctic, this is the first actual drilling that is about to start. But last year, when we participated in exactly the same protest, which I was part of last year, they said they were about to start then. Our protests slowed them down by about a week, and then they suspended. So, why this is significant is that this will be the beginning of a road to disaster if the drilling actually starts. So that’s why we’ve put so much of emphasis on this particular facility.

AMY GOODMAN: So, Kumi Naidoo, you did this last year already, you, yourself. Talk about that action you did, since you experienced it. I certainly remember it, as we were talking to you hanging off the side of the ship. And so, what has happened in this year?

KUMI NAIDOO: Well, in the course of this year—there was no charges brought against us, by the way. We were very transparent. We never hid anything. In fact, the Russian coast guard ship took them three days to get there, but once they got there, they just observed, and they took a view that we were peaceful. And after we finished our protest after about seven days, we sailed away peacefully, no problem.

So, this is a completely different approach. We don’t understand. I mean, piracy, by the way, is a very big international problem, as we stand today. To actually bring these charges against peaceful activists is to trivialize, actually, the challenge that we have on dealing with piracy, and it is to silence resistance.

And the reality is, I know my colleagues who have participated in this action. In fact, a young woman called Sini Saarela, who was with us last year, is the—was the first person to actually get arrested. And yesterday, the Russian coast guard themselves released footage of their reading of what they did, and it’s horrific. You’ve got Sini Saarela and other activists, Marco from Switzerland, being yanked and—while they were hanging, you know, several meters up. And they’re screaming, “We’re coming down! We’re coming down!” And, you know, they were—their lives were put at serious risk. And then they started shooting bullets into the water close to where the rigs were. And this is really unnecessary intimidation.

We appealed to President Putin and the Russian people as a whole to understand that what is at stake here is not just the world’s future, but Russia is actually very much in the firing line of climate change because of permafrost and what changes are happening, which will impact also heavily on the Russian people.

JUAN GONZÁLEZ: What do you make of the, on the one hand, prosecutors saying they’re going to pursue piracy possible charges, while President Putin says, “Well, obviously, they weren’t pirates,” in a public forum? Is this differences within the government or Putin just trying to put on a good face to the actions of his government?

KUMI NAIDOO: This is a really good question to put to the Russian government, who will be the only people who could answer with authority. The speculation is that—the reading is that the occupation of the ship by the coast guards, when they came down by helicopters, happened in international waters, and that action by the Russian state was in fact illegal in terms of international law. And it might be that they are pursuing the piracy charges, because that actually gives them cover from any litigation against them for an illegal act of occupying a ship for no good reason in international waters. That’s the only speculation I’ve heard at the moment, but quite honestly, that’s a question only the Russian authorities can answer.

AMY GOODMAN: And, Kumi, what are the U.S. plans for drilling in the Arctic? They said they’re going to release Arctic-specific drilling rules by year’s end. Of course, Shell wants to drill in the Arctic.

KUMI NAIDOO: Well, Shell has actually given the world a very eloquent sort of example of why it is so incredibly difficult for us to even think that it’s possible to safely drill in the Arctic. Shell has blown $5 billion of their investors’ money over the last two years in one fiasco after other trying to get to the point of exploration. Shell has now suspended the drilling for this year to try and get their act in order. But I think that it is very misguided of President Obama and the U.S. administration to actually allow this to actually happen. To grant any licenses is essentially yet another step towards accelerating us to irreversible climate change, because the consequences of drilling in this very fragile part of the world will just going to be devastating.

AMY GOODMAN: We’re going to break and then come back to our discussion, and Kumi Naidoo will be joined by Jeff Masters of Weather Underground, as we continue to talk about climate change. This is Democracy Now! Kumi Naidoo is executive director of Greenpeace International, in from South Africa. Stay with us. 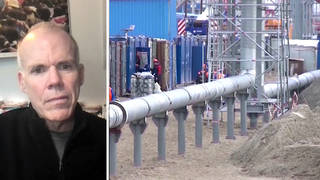 Bill McKibben: Latest IPCC Climate Report Underscores “Fossil Fuel Is at the Root of Our Problems”