Upon the death of former Israeli Prime Minister Ariel Sharon, we look at how his legacy of separating Gaza from the West Bank and building a “separation wall” to seal off Israeli settlements has impacted the peace process in the Middle East today. We speak with Noam Chomsky, world-renowned political dissident, linguist, author and Institute Professor Emeritus at Massachusetts Institute of Technology; Rashid Khalidi, Edward Said Professor of Arab Studies at Columbia University; and Avi Shlaim, Emeritus Professor of International Relations at Oxford University, widely regarded as one of the world’s leading scholars on the Israeli-Arab conflict. “What [Secretary of State] John Kerry should do is insist on implementing a very broad international consensus, virtually universal, calling for a two-state settlement on the internationally recognized border,” Chomsky says. “This is supported by the entire world; it’s been blocked by the United States for 35 years. We should shift that policy, join the world, and carry out measures which might conceivably bring a semi-decent peace.”

AMY GOODMAN: Why does—Professor Avi Shlaim, why does Ariel Sharon hold the special place he does in the annals of Israeli history?

AVI SHLAIM: Noam Chomsky reminded us that one shouldn’t speak ill of the recently dead, so I would like to say something positive about Ariel Sharon, which explains both his popularity with one segment of the Israeli population and the reviling of Sharon by another segment of the Israeli population. And the point is that towards the end of his active life, Sharon finally understood the limits of military power. He had always been a proponent of greater Israel, but he understood that the facts of democracy worked against Israel, so he didn’t—he did not jettison the dream of greater Israel, but he scaled it down to what he thought was realistic for Israel to maintain in the long run.

So he had a strategy of redrawing the borders of greater Israel unilaterally. Stage one was building the wall on the West Bank, and stage two was the unilateral withdrawal from Gaza in August 2005. Now, the withdrawal from Gaza was not part of any negotiations or overall peace deal with the Palestinian Authority. It was a unilateral move undertaken in Israel’s interests. So, Sharon withdrew from Gaza, but he wanted to consolidate Israel’s presence on the West Bank. And this got him into trouble with the right wing of his own party, the Likud Party, and with the settler community, so he quit the Likud, and he set up a new center party, Kadima. But Kadima did not survive Sharon’s political demise. Today, Kadima has two seats in the 120-member Knesset. So Sharon’s last-minute effort to realign Israeli politics ended in total failure.

His enduring legacy in Israel’s history is that he empowered and emboldened some of the most xenophobic, aggressive, racist, expansionist and intransigent elements in Israel’s dysfunctional political system.

RASHID KHALIDI: Another thing that might be mentioned about Gaza is that there’s a huge debate in Israel about whether the withdrawal was a good thing or a bad thing. The withdrawal did not change the situation of Gaza as being completely under Israeli control, which it is to this day. So Israel withdrew its settlers and withdrew its troops from within the Gaza Strip, but it completely controls the Strip from without. It is the largest open-air prison in the world. Sharon also had a notorious period as commander of the Southern Command in which he participated in the savage repression of resistance inside Gaza, killing thousands of—hundreds—well, many hundreds of Palestinian militants, destroying thousands of homes, as part of a huge repression of the resistance.

AMY GOODMAN: Noam Chomsky, Dov Weissglas, a top aide to Ariel Sharon, described the withdrawal from Gaza by saying, quote, “The significance of our disengagement plan is the freezing of the peace process. It supplies the formaldehyde necessary so there is no political process with Palestinians.” Explain what he meant and how that translates today to the so-called peace process that’s going on.

NOAM CHOMSKY: Well, Dov Weissglas understood the situation very well. The Oslo Accords in 1993 determined that the Gaza Strip and the West Bank are a single territorial entity which cannot be divided. Immediately, the United States and Israel set about separating the two and making sure that they would not be united. And this is extremely significant, not only for the people of Gaza, but for the prospect of any viable Palestinian entity. The West Bank is essentially imprisoned. Its one access to the outside world would be through Gaza—access through the sea, through the air, if there was an airport, and so on. By breaking Gaza from—separating Gaza from the West Bank, that undercuts whatever limited possibility there might be for a meaningful Palestinian self-determination.

Dov Weissglas pointed out that—what he meant is—in fact, as he said, Israel will keep the people in Gaza on a diet. We won’t let them starve to death; that won’t look good in the international world. We’ll just give them just enough to stay barely alive in this open-air prison, as Rashid Khalidi correctly described it, and they’ll be separated from the West Bank. Meanwhile, both the wall, the separation wall—actually an annexation wall—that Sharon initiated and other development and settlement projects, including in the Jordan Valley, will effectively cantonize whatever is left of—to Palestinian administration and surround it so that it has—so that it is another kind of prison, surrounded completely by Israel and its Jordanian ally.

Actually, Professor Shlaim said something very important in his last—his first comment at the very end. All of this can happen because of what he called Israel—ironically, Israel’s little friend, because the United States authorizes—it supports it, provides the requisite diplomatic, economic, military support, and also ideological support—namely, by a false—by the process of reshaping and falsifying what is underway. This is quite reminiscent; this is not novel, unfortunately. If you look at the history of South Africa, it was pretty similar. By 1960, the South Africans knew that they were becoming a pariah state. The South African foreign minister called in the American ambassador and told him, “Look, we know everyone is going to vote against us in the United Nations. We’re going to have all kinds of problems. But as long as you support us, it doesn’t make any difference.” And that’s the principle that they had here, too, right to the end of the Reagan years, 1988, the U.S., along with Britain, was still vetoing and blocking resolutions which would call for any kind of sanctions, and supporting South African atrocities and crimes. This is a kind of a replay of it. As long as the United States, the most powerful state in the world, continues to play its crucially supportive role, unfortunately, these developments will continue.

AMY GOODMAN: What could Kerry do right now?

NOAM CHOMSKY: What should we do?

AMY GOODMAN: And what should—what do you feel John Kerry should do?

NOAM CHOMSKY: What John Kerry should do is insist on implementing a very broad international consensus, virtually universal, calling for a two-state settlement on the internationally recognized border, which is, as was said before, the 1949 ceasefire line, possibly with minor and mutual adjustments, which was a U.S. policy—

NOAM CHOMSKY: Yeah. And this is supported by the entire world. It’s been blocked by the United States for 35 years. We should shift that policy, join the world, and carry out the measures which might conceivably bring a semi-decent peace.

AMY GOODMAN: We have to leave it there. I want to thank Professor Noam Chomsky in Massachusetts; Avi Shlaim, Israeli historian at Oxford; and Rashid Khalidi, a Palestinian professor, the Edward Said Professor of Arab Studies at Columbia University. 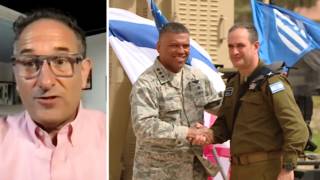