Japan has been a hotbed of protest against the Trans-Pacific Partnership, which would establish a free-trade zone stretching from Japan to the United States to Chile, and encompass nearly 40 percent of the global economy. Now, new documents released by WikiLeaks show the White House may be ready to backtrack on a series of critical regulations in order to secure a deal on the trade pact, including legally binding requirements for pollution limits, logging standards, and a ban on the harvesting of shark fins. The draft version of the “environmental chapter” also reveals that the United States and 11 other Pacific Rim nations that are party to the TPP would rely on trade sanctions instead of fines if a country violates its obligations. The Sierra Club responded to the latest news saying that if the draft report were to be finalized, “President Obama’s environmental trade record would be worse than George W. Bush’s.” Meanwhile, hearings begin today in Congress on legislation to establish fast-track authority that would allow Obama to sign the TPP before Congress votes on it. Broadcasting from Tokyo, we’re joined by Nobuhiko Suto, a former member of the Committee on Foreign Affairs in Japan’s House of Representatives, where he was among the first legislators to point out the dangers of the TPP. He is the secretary-general of the group, Citizen’s Congress for Opposing the Transpacific Partnership. We’re also joined on the phone by Lori Wallach, director of Public Citizen’s Global Trade Watch based in Washington, D.C.

AMY GOODMAN: We just got this breaking news out of Hollywood: The Oscar nominees for best documentary have been named. Among them is Dirty Wars. It’s produced by Jeremy Scahill of Democracy Now!, Rick Rowley, the director, and co-written with David Riker, the remarkable film about U.S. secret wars in Somalia, as well as in Yemen, in Afghanistan, as well. It’s among the five named, also Act of Killing by Josh Oppenheimer; Cutie and the Boxer; The Square, about the Egyptian uprising; and 20 Feet from Stardom. Those are the five nominees for the Oscar. You can go to our website to see interviews with some of the directors of some of these films at democracynow.org.

Well, we are broadcasting from Tokyo. Japan has been a hotbed of protest against the Trans-Pacific Partnership, which would establish a free trade zone stretching from the United States to Chile to Japan, and encompass nearly 40 percent of the global economy. Now, new documents released by WikiLeaks show the White House may be ready to backtrack on a series of critical regulations in order to secure a deal on the trade pact. These include legally binding requirements for pollution limits, logging standards, and a ban on harvesting of shark fins. The draft version of the “environmental chapter” also reveals that the U.S. and 11 other Pacific Rim nations that are party to the TPP would rely on trade sanctions instead of fines if a country violates its obligations. The Sierra Club responded to the latest news, saying if the draft report were to be finalized, quote, “President Obama’s environmental trade record would be worse than George W. Bush’s.”

Well, all of this comes as hearings begin today in the U.S. Congress on legislation to establish Fast Track authority that would allow President Obama to sign the TPP before Congress votes on it.

For more, we’re joined here in our Tokyo studio by Nobuhiko Suto, a former member of the Japanese Diet. He was on the Committee on Foreign Affairs in Japan’s House of Representatives, where he was among the first legislators to point out the dangers of the TPP. He’s the secretary-general of the group Citizen’s Congress for Opposing the Transpacific Partnership.

Welcome to Democracy Now! It’s very good to have you with us.

AMY GOODMAN: Why are you so concerned about the TPP?

NOBUHIKO SUTO: Well, at the initial impression of the TPP, as a concept, it was—I think it was OK. You know, that sounds quite good. Since I was an economist by education, and I was a professor of a university, teaching international political economy, before joining politics, so my first impression was TPP is the enlargement of a free trade system—it is good.

But just before the opening of APEC meeting, which was held in Yokohama three years ago, there came our Indonesian delegation, composed of the minister of commerce and some others. And they asked me, knowing that I am a friend of the prime minister, to ask prime minister not to say joining to TPP negotiations. So I was very surprised and shocked. “Why? Why you say so?” They responded that Indonesia is a country of scattered islands, so they are composed of different ethnicities, the races, and so on and so forth, so this is a very sensitive issue. And they have a, you know, different strategy, different policies to each ethnicities. So, that will be undermined by participating into TPP, so that’s the reason why Indonesia will not participate into TPP. And I was very surprised, and started studying about the risk of TPP.

But simultaneously, there’s so many of my friends in South Korea, Korean politicians, also pointing out the, you know, problems of a free trade agreement with the United States. And because of the FTAA, you know, the Korean industries and Korean farming industries are all devastated. And when I visited the United States for discussing about the TPP issue, almost all representatives of USTR—Mr. Marantis and [inaudible], everyone—everyone said, “Please study about U.S.-Korea free trade agreement, and the TPP will be more—you know, higher standard to be charged to participating countries.” So, I really understood the difficulties of the TPP.

NOBUHIKO SUTO: Well, at the initial stage, the widespread, you know, understanding of TPP is that, you know, if Japan take off any tax and duties on rice, and the Japanese rice is about seven times higher than international rice, so that, as a result, Japanese farming industries, farmers and especially rice croppers, they will be devastated. So, the government, you know, adverts that this TPP is an issue between the agriculture industry and export industry.

AMY GOODMAN: Nobuhiko Suto, we have Lori Wallach on the phone right now. She is in the U.S. Congress.

AMY GOODMAN: And there is a hearing taking place right now. Lori, thank you so much for joining us. Lori Wallach is director of Public Citizen’s Global Trade Watch. In these last few minutes, can you talk about what’s happening today in Congress and why you’re so concerned about the Trans-Pacific Partnership that would extend from, well, where we are now, in Tokyo, Japan, all the way through to Chile?

LORI WALLACH: Well, the agreement is having some, I would say, interesting times in the Senate today, because there’s a hearing, the first hearing on Fast Track. Fast Track is the authority that President Obama is seeking to railroad the TPP through Congress. TPP has so many potentially damaging elements that would be bad for the U.S., as well, for most people here, that the president has decided he needs this dreadfully extreme, Nixon-era process that basically takes away all of Congress’s normal prerogatives concerning legislation, and railroads a trade agreement through. It’s rarely been used, but, for instance, it was used to push NAFTA through, over public and congressional objections. So, the first hearing on Fast Track, a bill got submitted last week to implement Fast Track again. It’s not been in effect, but for five years in the last 20, and now Obama is trying to get it back to be able to get TPP enacted. And that hearing is in the Senate Finance Committee.

AMY GOODMAN: And the significance, Lori Wallach, of the WikiLeaks release of the draft document?

LORI WALLACH: Explosive. That’s going to be a big part of this hearing, I suspect. So, what happened is, WikiLeaks has now made public the environmental chapter of TPP. It’s been a very secretive process. So when these chapters come out, it basically allows everyone for the first time to really see what’s being done.

And the enormous news, front page of The New York Times, is that the Obama administration, where they are, if this agreement is finalized the way it is now, it would roll back even what the Bush administration had done in its trade agreements on environmental standards. And specifically, all the other TPP countries are insisting that the environmental standards not be enforceable at the same level as, say, the commercial standards. And the chapter also falls direly short on a whole bunch of conservation measures, very important ones, having to do with timber and fisheries. So, the really startling development yesterday was not only Sierra Club, who has been leading the fight against—for the environmental groups against TPP and Fast Track, but they were joined by the environmental groups that supported NAFTA—so, World Wildlife Fund, NRDC. The environmental movement is basically unified, saying, “For God’s sakes, the Democratic president can’t roll back what the Republican president had on environment in trade agreements.”

AMY GOODMAN: Lori Wallach and Nobuhiko Suto, we’re going to have to leave it there, but I thank you both very much for being with us. Of course, we’ll continue to follow the Trans-Pacific Partnership. And that does it for our broadcast. We are here in Tokyo, Japan, and I hope people come out to a public lecture Saturday, January 18th. I’ll be speaking in Tokyo at Sophia University at 10:00 a.m. at the International Conference Room, No. 2 Building. Then on Sunday, I’ll be in Kyoto at 7:00 p.m. And on Monday, at the Foreign Correspondents Club of Japan for a noon talk. Special thanks to the NHK international crew. Go to our website at democracynow.org. 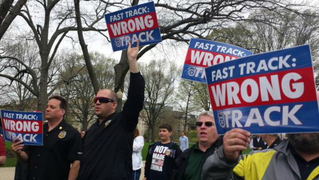