Bill de Blasio began his term as New York City mayor on Wednesday with a bold pledge to tackle income inequality in the nation’s largest city. De Blasio was sworn in following last year’s historic victories in the Democratic primary and general election on a progressive platform. In his inaugural address, de Blasio focused on his campaign pledge to tackle what he called “a tale of two cities,” a growing gap between rich and poor. “New Yorkers [will] see our city not as the exclusive domain of the One Percent, but a place where everyday people can afford to live, work, and raise a family,” de Blasio said. “We won’t wait. We’ll do it now.”

StoryDec 14, 2021“Our Movement Is Growing”: How Starbucks Workers in Buffalo Fought Company’s Union Busting and Won

JUAN GONZÁLEZ: Here in New York, Bill de Blasio has been sworn in as the city’s new mayor, replacing billionaire Mike Bloomberg. Former U.S. President Bill Clinton administered the oath of office on a Bible once used by Franklin Delano Roosevelt. De Blasio is the first Democrat to lead New York in two decades. In his inaugural address, he vowed to fight income inequality.

MAYOR BILL DE BLASIO: I know that there are those who think that what I said during the campaign was just rhetoric, just political talk in the interest of getting elected. And there are some who think that now, as we turn to governing, well, that things will just continue pretty much the way they always have. So let me be clear: When I said I would take dead aim at the tale of two cities, I meant it. And we will do it. I will honor the faith and the trust you have placed in me, and we will give life to the hope of so many in our city. We will succeed as one city.

And we know this won’t be easy. It will require all that we can muster. And it won’t be accomplished only by me. It will be accomplished by all of us, those of us here today and millions of everyday New Yorkers in every corner of our city. You must continue to make your voices heard. You must be at the center of this debate. And our work begins now.

We will expand the paid sick leave law, because no one should be forced to lose a day’s pay or even a week’s pay simply because illness strikes. And by this time next year, fully 300,000 additional New Yorkers will be protected by that law. We won’t wait; we’ll do it now.

We will require big developers to build more affordable housing. We will fight to stem the tide of hospital closures. And we’ll expand community health centers into neighborhoods in need, so that New Yorkers see our city not as the exclusive domain of the 1 percent, but a place where everyday people can afford to live, work and raise a family. We won’t wait; we’ll do it now.

We will reform a broken stop-and-frisk policy, both to protect the dignity and rights of young men of color and to give our brave police officers the partnership they need to continue their success in driving down crime. We won’t wait; we’ll do it now.

And we will ask the very wealthy to pay a little more in taxes, so that we can offer full-day universal pre-K for every child in this city and after-school programs for every middle-school child. When we say “a little more,” we can rightly emphasize the “little.” Those earning between $500,000 and a million dollars a year, for instance, would see their taxes increase by an average of $973 a year. That’s less than three bucks a day—about the cost of a small soy latte at your local Starbucks. Think about it. A five-year tax on the wealthiest among us with every dollar dedicated to pre-K and after-school. Asking those at the top to help our kids get on the right path and stay there, that’s our mission. And on that, we will not wait; we’ll do it now.

AMY GOODMAN: That was New York City Mayor Bill de Blasio delivering his inaugural address on Wednesday outside City Hall. Well, Juan, you were there covering the inauguration in the bitter cold.

JUAN GONZÁLEZ: In the bitter, bitter cold, yes, it was. A numbing cold, it was for hours out there. But it really was an unusual inauguration, and I’ve covered many of these municipal inaugurations over the years. The most interesting thing, obviously, was the more people-oriented nature of the inauguration. The mayor—the new mayor had given out a thousand tickets to ordinary New Yorkers who applied for them. There was disco music to entertain the—a disc jockey to entertain the audience while they waited in the cold.

And I think it’s kind of—it’s hard to underestimate the extraordinary change that is occurring in city government compared to the Bloomberg era. And there was Michael Bloomberg sitting—probably the most morose look on his face that he’s had in his 12 years in office, as he heard one after another speaker essentially criticize his record. And I think that it’s hard to underestimate the enormous change that’s occurring. It’s almost a 180-degree turn in New York City government, not just with Bill de Blasio, but with the new public advocate, Letitia James; the comptroller, Scott Stringer; and next week the City Council is poised to elect a councilwoman from East Harlem and the South Bronx, Melissa Mark-Viverito, to be—and who’s also the co-chair of the Progressive Caucus, to become the speaker, which is the second most powerful post. So you’ve got basically a coalition of the most progressive public officials almost in memory about to—assumed office in this week. And I think it’s going to be a dramatic change from the sort of corporate-oriented, top-down management style of the Bloomberg era to a more bottom-up effort to address the needs of the 99 percent that obviously Occupy Wall Street put on the national map.

AMY GOODMAN: Now, interestingly, one of the biggest cheers came when he talked about taxing wealthier New Yorkers to help pay for pre-K education.

JUAN GONZÁLEZ: Well, not only pre-K, but I think people have not noticed that he’s also increasingly emphasizing after-school programs and the need for middle-school children to—for parents, working parents, to feel that their children are in safe hands if they’re in after-school programs while—before they arrive—before their parents arrive home from work. So I think he’s emphasizing preschool and after-school programs, which have seen huge slashes over the last couple of decades in terms of government investment in that time between 3:00 and 5:00 or 6:00, when children, many of them, are unsupervised, unfortunately, especially the older children.

AMY GOODMAN: You also profile—in your piece in the New York Daily News today, you talk about Patrick Gaspard, who was there. You talk about him flying in from South Africa, the new U.S. ambassador there. Talk about his significance and his link to de Blasio.

JUAN GONZÁLEZ: Well, most people don’t realize that Bill de Blasio and Patrick Gaspard actually started—they’ve been friends for close to 25 years. They both started, as neophytes, young, political operatives in the Dinkins administration back in the early 1990s and became close friends and have been political allies ever since. Of course, Patrick went on, after being the political director at the powerful hospital workers’ union, 1199, he went on to be—to help organize the two election campaigns of President Obama, then was in the White House as political director, then was head of the DNC or the executive director of the DNC, before he became the ambassador to South Africa earlier this year. So, they’ve been close for years, and he’s still—they’re still very close.

So, many of the people that De Blasio is now looking to, to help in his administration, have also been very close to Patrick Gaspard. He chose as his chief of staff the former top aide to Patrick in all of these different positions, Laura Santucci, who will now become the new City Hall chief of staff. So there’s been a close alliance between them for years. But, of course, now Patrick is an ambassador now; he’s out of politics, per se, but he couldn’t help coming to this inauguration.

AMY GOODMAN: And you talk about the man who trained them both, de Blasio and Gaspard.

JUAN GONZÁLEZ: Yes, both were trained by Bill Lynch, the former deputy mayor under David Dinkins and who was a mentor to many young African-American, Latino and progressive political activists over the years. And, of course, Bill Lynch died earlier this year, and both Patrick Gaspard and Bill de Blasio were at his funeral, as were many, many of the progressive political activists of New York over the decades. So, it’s sort of bittersweet that Bill died just before Patrick was installed as the new South African ambassador and just before Bill de Blasio won his race for mayor.

AMY GOODMAN: We’re going to go to break. When we come back, the charge to Bill de Blasio given in a speech by Harry Belafonte. This is Democracy Now!, democracynow.org, The War and Peace Report. And then we’ll bring you our national broadcast exclusive, as we went to LaGuardia Airport yesterday, right about the same time that Bill de Blasio was being inaugurated, to cover the return of attorney Lynne Stewart. She had been in prison for four years. Stay with us. 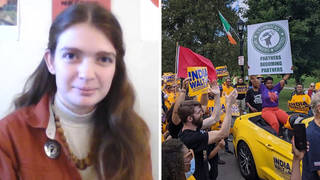