Record cold temperatures are being recorded across the Midwest and Eastern United States again today as a so-called polar vortex of dense, frigid air has descended as far south as Texas and Florida. According to the National Weather Service, temperatures are 20 to 40 degrees Fahrenheit below average in parts of Montana, North and South Dakota, Minnesota, Iowa, Wisconsin, Michigan and Nebraska. In Brimson, Minnesota, the temperature fell to minus 40 degrees Fahrenheit. Fargo, North Dakota, recorded temperatures as low as 32 degrees below zero. In Illinois, motorists are being urged to stay off the roads for a second day, and schools remain closed in Chicago and other cities. In New York, the temperature dropped by nearly 50 degrees over a few hours on Monday. We are joined by Jeff Masters, director of meteorology at the Weather Underground.

Web ExclusiveJan 21, 2020“Our House Is Still on Fire”: Full Speech by Greta Thunberg at World Economic Forum in Davos

The cause? Well, it’s called a polar vortex, a dense frigid air that’s descended as far south as Texas and Florida. According to the National Weather Service, temperatures are 20 to 40 degrees Fahrenheit below average in parts of Montana, North and South Dakota, Minnesota, Iowa, Wisconsin, Michigan and Nebraska.

To talk more about the record cold and the connection between the polar vortex and climate change, we’re joined by Jeff Masters, director of meteorology at the Weather Underground. He’s joining us from Ann Arbor, Michigan.

JEFF MASTERS: It’s about 14 below zero, 20 mile-an-hour winds, and that goes for a wind chill about 40 below zero.

AMY GOODMAN: How unusual is that?

JEFF MASTERS: It doesn’t happen very often. The last time we saw conditions this cold was back in 1994.

AMY GOODMAN: So, tell us what an Arctic vortex is.

JEFF MASTERS: Sure. It’s a situation you see every winter over the Arctic. I mean, you’ve got 24-hour darkness up there, and the cold air tends to build and build and build because of the lack of sunlight. And when you get all that cold air up there, it tends to drive stronger winds. And those winds blow counterclockwise around the pole in a vortex, and those winds tend to isolate that cold air from the rest of the world. And so, that cold air can stay cold, and when that happens to slosh over where we are, boy, we sure notice it.

AMY GOODMAN: Here in New York, we’re not only talking about record cold, but yesterday it was more than 50 degrees warmer. It dropped 50 degrees in a matter of hours. How unusual is this?

JEFF MASTERS: Yeah, that’s pretty rare to go a 50-degree change in one day. I mean, back on Sunday, you had airplanes sliding off runways, and then it was 55 on Monday, and now you’re down at 4 degrees, which, like you said, is a record low. That’s some serious weather whiplash. You don’t see the things oscillate that extremely very often.

AMY GOODMAN: Rush Limbaugh, the conservative talk-show host, bashed the media for its coverage of the polar vortex, saying reporters are using the recent cold snap to push their global warming, quote, “agenda.” This is what he had to say.

RUSH LIMBAUGH: So, ladies and gentlemen, we are having a record-breaking cold snap in many parts of the country. And right on schedule, right on schedule, the media have to come up with a way to make it sound like it’s completely unprecedented, because they’ve got to find a way to attach this to the global warming agenda. And they have. It’s called the polar vortex, the dreaded polar vortex. Do you know what the polar vortex is? Have you ever heard of it? Well, they just created it for this week. And it’s—of course, you can’t—actually, there is a piece. I’ve got a piece in the stack that actually makes the case that all of this frigid, chilling cold is due to global warming, strange as it may sound, it says. Other wackos are saying it’s a great example of climate change. But regardless, the agenda is that we’re responsible. We are causing it. We have to pay the price.

AMY GOODMAN: That was Rush Limbaugh. Jeff Masters, your response?

JEFF MASTERS: It’s good for entertainment, but you don’t go to Rush Limbaugh for science. I mean, the polar vortex has been around forever. It’s just the media happened to latch onto it this week. I don’t know why, but it sure did kind of snowball. It’s been around—you know, I’ve been talking about the polar vortex for years. It’s just funny that it got out in the media the way it did this week.

AMY GOODMAN: Well, but talk about this, because all over Fox and other places, you have this mocking and the derision: “See, global warming can’t possibly be related to what’s happening.” So explain how it can. How can the Earth getting hotter relate to such cold weather?

JEFF MASTERS: Yeah, this is a one-in-20-year type of cold weather event, which you expect to see grow less common as the planet heats up. I mean, the planet has heated up about a degree and a half Fahrenheit over the last 130 years, and you expect these one-in-20-year events to maybe occur one-in-30 years. But they’re still going to happen.

OK, now counterbalancing the fact that we would expect to see these events grow less common due to the fact the planet is warming up is, well, maybe, if we alter circulation patterns in such a way where the polar vortex now will slip southwards more often, then you could counterbalance that. And there is some evidence over the last few years that the jet stream has been doing something we haven’t seen before, at least not as often. Normally those winds blow straight west to east, with a little bit of waviness to it, but now we’re seeing more extreme excursions in the jet stream, where you get these big bulges, these high-pressure ridges on one side, and then low pressure dipping far to the south—very unusual to see these sort of contortions like we’ve had in recent years. And there is evidence that possibly Arctic sea ice loss could cause that sort of jet stream behavior.

AMY GOODMAN: Can you talk about what the drunk jet stream is?

JEFF MASTERS: Yeah. Well, normally the jet blows, like I said, straight west to east, but when the winds slow down in the jet stream, now they tend to wander around a little more. They’re not constrained to flow in this kind of tight, narrow ribbon so much. Now they can do kind of these big meandering loops. And when you reduce the temperature difference between the Equator and the poles, you tend to slow down the winds of the jet stream, and you tend to allow this sort of meandering behavior. And this difference in temperature between the Equators and the poles has been growing less and less in recent years because we’ve been losing so much Arctic sea ice. That allows the sun to shine more intensely up there, because now you’re exposing open water, which is dark, absorbs more sunlight, heats up the area, melts more ice, in kind of a vicious cycle, and increases the warmth even more. So, all this kind of makes sense that it could be the fact that warming in the Arctic is altering jet stream behavior.

AMY GOODMAN: We hear descriptions of how—what happens to skin when it’s exposed to such cold. Jeff, can you talk more about that?

AMY GOODMAN: Can you, overall, give us a round-up of extreme weather in 2013?

JEFF MASTERS: 2013, if you talk globally, we had $40 billion weather disasters, which ties a record for the most we’ve ever seen. Now, the actual dollar losses from those events was, oh, near average. We didn’t have a single like Hurricane Sandy or a single drought of 2012, which was a tens of billions of dollars type of loss event. But that kind of a $40 billion sort of year for these events does make me say, “Wow, you know, that was a pretty extreme year,” even though we didn’t have a major La Niña event or an El Niño event, which tends to drive sort of an increase in extreme weather events. So, it’s hard to quantify extreme weather. We don’t have very good ways to do it. We don’t have data that goes back in time long enough. But certainly, by that measure, by the number of billion-dollar disasters, it was a very extreme year.

AMY GOODMAN: I’m looking at a piece from ThinkProgress by Emily Atkin. She says, “On Sunday night, a reporter for The Weather Channel stood in a Minnesota snowstorm, talking about local efforts to move homeless children into heated shelters. 'How cold is it supposed to get?' the anchor, back in the studio, asked. The reporter replied: 'Colder than Mars.' Indeed, recent temperatures across the U.S. have been Mars-like.” Jeff Masters?

JEFF MASTERS: Yeah, I mean, North America is pretty amazing for its ability to create some very intense cold. All that 24-hour darkness over northern Canada makes for some very cold air masses, and when they spill south, you can get temperatures colder than Mars, if you pick a very warm day on Mars near the equator.

AMY GOODMAN: Well, I want to thank you for being with us, Jeff. Now we are going to move into, at least in New York, much, much warmer weather this weekend.

JEFF MASTERS: Yeah, you’re going to be up in the 40s, above-average temperatures, 5 to 10 degrees above average. Weather whiplash at work again.

AMY GOODMAN: Weather whiplash. Jeff Masters, thanks so much for being with us. Stay warm. Director of meteorology at the Weather Underground, joining us from Ann Arbor, Michigan. This is Democracy Now!, democracynow.org, The War and Peace Report. 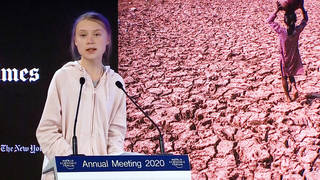 “Our House Is Still on Fire”: Full Speech by Greta Thunberg at World Economic Forum in Davos