Actor Jesse Williams Joins Ferguson October: This is a Basic Desire Not to Be Killed with Impunity

When Democracy Now! was in St. Louis to report on Ferguson October, our producer Aaron Maté spoke with Grey’s Anatomy actor and activist Jesse Williams, who joined thousands in calling for justice in the killing of unarmed black teenager Michael Brown. Activists in Ferguson have defied a militarized crackdown and taken to the streets to call for the arrest of police officer Darren Wilson, who shot Brown. Their efforts have made Ferguson ground zero for the movement against police brutality and racial bias.

See all of our coverage of protests calling for justice in the case of Michael Brown.

AARON MATÉ: Now, Jesse, you’re a Hollywood actor on Grey’s Anatomy. Why have you come to St. Louis?

JESSE WILLIAMS: Because I couldn’t get here sooner, because I had to work, but got here as soon as I possibly could. I think you need to—we need to stand up and show some support for an incredible weekend of resistance, people coming from all over the country to say, “Enough is enough,” and we’re not going to, you know, be strung out in isolation anymore; recommit ourselves to finding unity, finding common ground, finding what’s common to all of us. And that is just a basic, really, desire to be able to survive and not be killed with impunity, to have those who’ve taken an oath serve and protect us to, on occasion, serve and protect us, to be held accountable for our actions. Everybody that we know and love is held accountable for breaking the law. So, those who break the law, if they happen to be wearing a blue shirt with a button-up that we paid for, they should probably be held accountable also.

So, we’re not out here asking for blood; we’re out here asking for due process. That means a charge when a charge is warranted. And a charge is clearly warranted in the murder of Mike Brown. A charge is clearly warranted for John Crawford or Eric Garner, Darrien Hunt, etc., right? We can go on and on. And that really is a problem, is that we can go on and on, is that we can pretend that race is not an issue, but show me the pile of, you know, bodies that are not brown that deal with this, that it really is a trend, it is a pattern, and we need to be able to learn from patterns. What’s the point in having them if we’re not going to progress and assess what’s going on and see how we can improve? Now, if you’re not interested in improving, then what we should do is shovel it under the rug and pretend that it doesn’t really matter. But if you really—if this is something that we really care about, if we really think that no matter what you may have done, no matter what you might have, no matter what charges you might have had behind you, no matter how many kids you had, no matter what color you are, no matter what education level you have, do you have a right to walk freely in this country? You can’t be half-free. Are we free or not? Amiri Baraka said, you know, you can’t—you know, can’t be sometimes free. You know, it’s not something we have an apprenticeship for, freedom. So we want what we deserve, which is basic respect.

AARON MATÉ: You’ve used your platform as a celebrity to speak out very forcefully on issues of racial justice. What kind of response have you gotten?

JESSE WILLIAMS: The response that I’ve gotten is right down the middle. I get plenty of negativity. I get plenty of hate. I get plenty of racism. I get plenty of, you know, spiteful, bitter-ass comments. But that was always there anyway, and I get plenty of love and support. Neither one of those are really a factor for me. You know, I was an activist first. I was in the streets of Philadelphia first. I’m with Friends and Family of Mumia, and at Temple University and a public school teacher. I happen to act now. That really has zero to do with my awareness of what’s going on and my giving a damn about human life, about brown life, about disenfranchised people, about indigenous people, about us holding ourselves up to the ideals that we claim to pledge to every day. So, yeah, there’s negativity. Yeah, there’s hate. Yeah, there’s death threats and bull [bleep], but whatever. You got one life, you know?

DN! in the NewsJan 06, 2015WATCH: Amy Goodman Discusses Policing in America on MSNBC with Melissa Harris-Perry 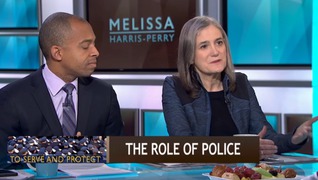