An Unprofitable Disease: In the Political Economy of Ebola, Who Lives and Who Dies?

We look at the political and economic circumstances of the spread of Ebola with science writer Leigh Phillips, who calls for a socialization of pharmaceutical research and production. Phillips says that using revenues from profitable drugs to subsidize research for unprofitable drugs would reduce the costs of vaccines and their development. He also argues the decimation of the healthcare infrastructure is linked to the same free market policies and austerity measures pushed by Western countries and the International Monetary Fund that impoverished the West African countries where the Ebola outbreak has occurred. “We need to begin to ask whether capitalism itself is not pathogenic,” says Phillips, whose recent article for Jacobin magazine is “The Political Economy of Ebola.”

StoryNov 10, 2014Out of Ebola Quarantine, Yale Student Says Health Workers Should Be Treated as Heroes, Not Pariahs

AMY GOODMAN: We bring in Leigh Phillips now into this conversation—Michelle speaking to us from Atlanta. He’s a science writer and European Union affairs journalist. His writing has appeared in Nature, The Guardian, Scientific American. His recent piece for Jacobin is headlined “The Political Economy of Ebola.” What do you mean by this, “the political economy of Ebola,” Leigh Phillips?

LEIGH PHILLIPS: Well, I think we need to look at the political and economic circumstances, particularly around this particular disease both in the United States and Western countries in terms of the funding for research, where that’s coming from, and in terms of austerity in Europe, but also austerity in West Africa, as well. There’s sort of two prongs to this. The first, of course, was that, you know, over the last few months we’ve seen over and over again people from the CDC, senior figures from the WHO, even John Ashton, the head of the U.K. Faculty of Health, who have said, basically, that the knowledge is there, the know-how is there—we have five candidate vaccines, there’s a number of other different treatments that, you know, are well in hand—but there just hasn’t been any buy-in from the major pharmaceutical companies. John Ashton, as I was saying, from the U.K. Faculty of Health, you know, sort of the doctor-in-chief, if you will, in the U.K., described this as “the moral bankruptcy of capitalism.” It sounds, you know, quite vituperative there, quite explosive language, but it really expresses the anger that a lot of the researchers feel about how, look, we know what to do here, but this is just an unprofitable disease.

NERMEEN SHAIKH: So, could you elaborate, Leigh Phillips, on the point that you make in your article about why it is that pharmaceutical companies are more interested in funding medications that people have to take over a long term, rather than investing in one-off medicines like vaccines?

LEIGH PHILLIPS: It’s fairly straightforward, and it’s not—the argument is not that the major pharmaceutical companies are somehow evil or malevolent. This is just the way that the free market works. If Ebola, like many, many other unprofitable diseases, is something that—basically, if we’re going to resolve the situation, we’re going to basically cure it. We’re not going to handle it for the long term. We want something that—some drug or some vaccine or some treatment that people are going to take once, twice, maybe for a short period of time, but then that’s it. We don’t want to be dealing with this for the rest of—somebody doesn’t want to be dealing with this, obviously, for the rest of their lives.

And compare that to the situation with, say, insulin for diabetes or other drugs that people might need to have to take every day for the rest of their lives. Any sort of major pharmaceutical company, if you—they’re trying to decide where they’re going to invest their, you know, roughly, maybe around a billion dollars’ investments into any new drug. Are they going to invest that money in a product that is going to have a very low return on investment or not much of a return on investment at all, or something that is much more likely to have quite a high return on investment? It’s a bit of a no-brainer where they’re going to allocate the bulk of their money.

And so, what we see here is, this is—Ebola, in many cases, is just an example of a wider problem that we have with pharmaceutical research. Antibiotic resistance right now is a very, very frightening situation, where we are facing a sort of 30-year—what’s called in research journals a “discovery void,” that is, that pharmaceutical companies have for about three decades now refused to engage in any—the development of any new classes of antibiotic. And we’re really coming towards the edge—the end of the efficacy of the antibiotics that we have in the cabinet at the moment. And we have about five to 20 years left before we see a sort of fairly rampant increase in deaths from bacterial infections.

AMY GOODMAN: I wanted to just—Leigh?

AMY GOODMAN: I just wanted to ask—you’re speaking to us from Vancouver, Canada.

AMY GOODMAN: Vancouver, Canada, where you have a public healthcare system.

AMY GOODMAN: The piece you wrote is called “Socialize Big Pharma.” So can you talk about—I mean, you’re saying that for private drug companies, for these mega-multinational corporations, to invest in a vaccine, for example, for Ebola, doesn’t—is not profitable for them. So what then is the solution? This, of course, is really magnifying this issue on a global stage, how public health systems in the United States and all over have so deteriorated. Can you talk about your point, socializing Big Pharma?

LEIGH PHILLIPS: Absolutely. I think if we look at most Western countries in the postwar period—’40s, '50s and ’60s—most Western countries nationalized their healthcare systems to a greater or lesser degree. And the United States is one of the only sort of countries that hasn't done this yet, but it’s still pretty much—we’re moving—the United States is, even there—is moving in that direction. But this is basically half of the task. The other half of the task is to bring in the pharmaceutical sector into the public sector, for exactly the same reasons, that it is simply too dangerous an issue for this to be left to the vagaries of the profit motive within the market. What we can do is—

AMY GOODMAN: And so, what would that look like?

LEIGH PHILLIPS: —recognizing that this is a market failure. And this is not just some, you know, far-left analysis; this is recognized right across the board, that there is a major market failure within the pharmaceutical sector. The companies themselves recognize this. The solution is one of two things: either a fairly major public intervention to fill that gap or, as I argue, just much more simply is, if we can use the profits from profitable—the revenues from profitable drugs to subsidize the research and development and commercialization of unprofitable diseases, we’re going to, as a society, spend far less to solve this problem anyway. So, that’s the simple calculus there.

NERMEEN SHAIKH: Leigh Phillips, another point that you make in your article is that it’s not coincidental that Ebola is affecting some of the poorest countries in the world. So could you talk about some of the collapse of the infrastructure, public infrastructure, in Liberia and in Sierra Leone that has allowed this virus to spread as rapidly as it has? And what contributed to that collapse of public facilities?

LEIGH PHILLIPS: Absolutely. I think that—I mean, one of the really, really frustrating things with this particular issue is how it really demonstrates the—as John Ashton wrote in the U.K., the moral bankruptcy of capitalism, not just on the one end in terms of research, but in West Africa, as well, and in Spain. We see that the same processes, the same free-market-driving ideology that has reduced these countries to real dire poverty. These three countries are some of the most poor countries in the world. And when I say “most poor countries in the world,” I mean really right at the bottom of the global league tables. And their public healthcare infrastructure has been utterly decimated, not merely by civil war but by a series of processes that are imposed by Western countries, international financial organizations like the International Monetary Fund. The International Monetary Fund itself recognizes this, because just last week Christine Lagarde, the head of the IMF, said to West Africa, “Look, now is not the time to be worrying about your spending. Go ahead, increase your spending,” and she finished her comments by saying, “We don’t normally say this.” Well, this is exactly true. The sort of structural adjustment that has been imposed in these countries, and many other countries, as well, is what is responsible for the decimation of the healthcare infrastructure in these countries.

And we’re seeing it in—in fact, this exact same process is in Spain. The European Union has imposed, you know, since the economic crisis, since the eurozone crisis, a series of absolutely brutal austerity programs in the southern flank—in Spain, Italy, Greece, Portugal—and in Ireland, as well. Part of the response—the result of this has been, again, a real deterioration of public health infrastructure. Spain has seen basically a quarter of its spending on healthcare cut for the last few years annually. So you see nurses and other medics marching in the streets in Spain—they call them these white ties, because people are wearing their white lab coats—protesting what’s happening with austerity. The hospital where we’ve seen the cases in Spain, their isolation ward was shut down directly as a result of the imposition of austerity by Brussels and the decisions in Madrid.

It is on both ends; both the market failure in terms of pharmaceutical research and the decimation of public healthcare infrastructure, both in West Africa and in Europe, it’s two sides of the same coin. They both put capitalism in the dark here. There’s a friend of mine who’s a phylogeographer, Rob Wallace. He has this wonderful phrase about this, about how pathogens follow inequality and expropriations like water falls—follows cracks in ice. I think that’s absolutely correct. I think we need to begin to ask whether capitalism itself is not pathogenic, whether neoliberalism is not pathogenic.

AMY GOODMAN: Leigh Phillips, we’re going to have to leave it there. We thank you so much. Science writer, European Union affairs journalist, joining us from Vancouver, Canada. We’ll link to your piece in Jacobin headlined “The Political Economy of Ebola” at democracynow.org.

This is Democracy Now! When we come back, women’s healthcare here at home. Stay with us. 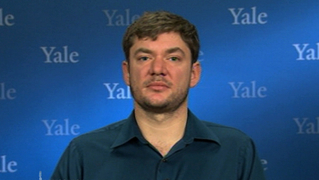 Out of Ebola Quarantine, Yale Student Says Health Workers Should Be Treated as Heroes, Not Pariahs