“From Ferguson to NYC, Stop Police Brutality” was the chant by parents of police victims and their allies who marked the 19th annual National Day of Protest to Stop Police Brutality, Repression and Criminalization of a Generation. Democracy Now! was there when hundreds gathered in Manhattan for a rally and march, as similar demonstrations took place around the country.

See all of our coverage of police brutality.

Thanks to Democracy Now! fellow Samantha Riddell for this report.

CARL DIX: Today, in 80 cities all across the country, people are taking to the streets, saying, “No more to police murder. No more to warehousing people in prison. No more to torture in the prisons. No more to treating black and Latino youth like criminals. And no more detention and deportation of our immigrant sisters and brothers.” And you can see from this march, it’s being led by family members whose children have been murdered by the police.

IRIS BAEZ: This is going to be the 20 year I’ve been coming out to protest police brutality. The people are waking up, you know, to these brutalities. We’re not going to take it no more. And this is the time to get up and say what you got to say and tell them in their face what they deserve to hear.

DANETTE CHAVIS: My name is Danette Chavis. I’m the mother of Gregory Chavis, who lost his life at the hands of NYPD in October 2004. I am convinced that nothing will change concerning this action until it is brought to the highest levels in government. We need nationwide action. We need the U.S. attorney general of the Department of Justice to deal with the issue of police brutality once and for all. Thousands of people are being murdered whose cases we know nothing about because they don’t have the ability to have their tragedy highlighted in the media.

PROTESTERS: No justice, no peace! No trust for the police!

ALOK VAID-MENON: My name is Alok, and I work with the Audre Lorde Project. And I’m out here to protest police brutality against trans and gender-nonconforming people. I think after Ferguson, we’ve seen a politicization of a lot of young people around police brutality, but we forget that police brutality has and continues to affect queer and trans people and that often these people don’t have access to families, these people are in underground economies, these people are in street economies. And it’s so important that we don’t erase them from our narratives of who’s being victimized by the police. We just celebrated the one-year marker of Islan Nettles, a black trans woman who was murdered in front of a police department in Harlem. And this was just one of the many incidents of police brutality faced by trans and gender-nonconforming people of color.

ALEJANDRINA MURPHY: One of the numbers that have been increasing lately in the mass incarceration has been—is women right now, especially women of color. And this prison system is making a lot of money, especially of immigrant women, more women that they have passed either the border of the United States or have came here illegally and have stayed for a long time. I’m a woman of color. I’m a woman who immigrated here to this country a very long time ago. But still, as part of the Latino community, I don’t want to see these women being incarcerated, because crossing borders is not a crime.

NOCHE DIAZ: The epidemic of police murder has gotten worse. But what has changed over the last few months has been wave after wave of resistance. And some of it culminated and centered out of Ferguson when people refused to just go home and accept that the police once again could get away with murder. And they faced tear gas and tanks and rubber bullets, and said, “We are not afraid to die, because we are sick and tired of living this way.” And that spirit of defiance has begun to spread around the country. And that has to be channeled into meaningful forms of resistance, not the same old dead ends of voting or praying or just hoping that this goes away, but people taking their own responsibility to be part of the generation that’s going to end this. 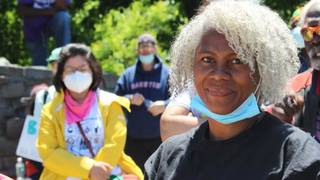