Sen. Bernie Sanders: The United States is on the Verge of Becoming an Oligarchy

We get reaction to the Republicans’ big midterm victory from Sen. Bernie Sanders, Independent of Vermont. “What frightens me is what Citizens United has done to the politics of this country and the ability of billionaires like the Koch brothers and others to put unprecedented sums of money into elections,” Sanders says. “I fear that we may be on the verge of becoming an oligarchic form of society where a handful of billionaires control not just the economy, but the political life of this country. And that’s just something we’re going to have wrestle with.”

AMY GOODMAN: [This is] Democracy Now!, democracynow.org, The War and Peace Report. I’m Amy Goodman, on this day after. That’s right. Last night, Tuesday night, during Democracy Now!’s five-hour special broadcast, Juan González and I spoke with Independent Senator Bernie Sanders of Vermont, just as it started to become clear from early election results that the Senate was clearly going to be controlled by Republicans.

SEN. BERNIE SANDERS: What I do know is that if in fact the Republicans carry the Senate and control the Congress, as they may, I think it will be a disaster for the middle-class and working families of this country. And we’re just going to have to figure out how we can fight back as effectively as we can.

JUAN GONZÁLEZ: And what do you see as the options for—in case that does turn out to be the result tonight, what do you see the options in terms of how President Obama can move forward any kind of a Democratic or progressive agenda in the remaining two years?

SEN. BERNIE SANDERS: I think it’s quite far-fetched to believe that he can move forward a progressive agenda. I think the immediate effort will be to stop to have more tax breaks for the wealthy and large corporations, which the Republicans will certainly bring forward. I think under the guise of, quote-unquote, “entitlement reform,” they will be making efforts to cut Social Security and Medicare. They’ll go after Medicaid. They’ll go after education. They’ll go after nutrition. They’ll probably want to increase funding for the military. And my guess is, with all of the money from the Koch brothers coming in and the other fossil fuel industries, they’ll continue to ignore scientific evidence about climate change. So, I think we’re going to be more of a defensive mode trying to prevent bad things than having illusions at this point about doing good things.

AMY GOODMAN: Senator Sanders, your state has struggled with your Obamacare website. It has caused a very major issue particularly in Vermont, because of the quest by Governor Shumlin and many others to make Vermont the first single-payer state. Can you talk about the significance of this and what it will mean?

SEN. BERNIE SANDERS: Well, it’s obviously a negative. I mean, I am a strong advocate of a Medicare-for-all, single-payer system. I think if you want to provide quality care to all people in a cost-effective way, that is the approach you have got to go. Clearly, it is not a good thing for a state government, or in fact federal government, not to be able to run a website which is accountable and works well for people. So, that’s a negative. But I hope very much that despite that, we’ll go forward and be the first state in the country to pass a single payer.

AMY GOODMAN: I mean, one argument that even Governor Shumlin has used is that, you know, Obamacare is complicated—

AMY GOODMAN: —and that that is not the ultimate answer. And this, the downing of your website, proves this.

SEN. BERNIE SANDERS: Look, what you need—the American healthcare system is enormously complicated. And when you have a system that is complicated, it becomes very, very expensive, and we end up spending approximately 30 percent of every healthcare dollar in the administration and profiteering and everything else. Clearly, in my view, and I think the view of a whole lot of Americans, healthcare should be a right. We should fund it through public funding in a progressive way, and people should be able to go to the doctor they want in the hospital they want. And it turns out that in our country we spend—and people don’t understand this—we spend almost twice as much per person on healthcare as do the people of any other nation, precisely because it is a complicated, bureaucratic, confusing and profit-oriented system.

AMY GOODMAN: Senator Sanders, the issue of the minimum wage, in all the states that it is being introduced, the ballot initiative being voted on in Alaska, in Arkansas, in Nebraska, in South Dakota, even if they’re Republican states, it is overwhelmingly, two, three to one, being voted for. What message does this send to your Democratic colleagues?

SEN. BERNIE SANDERS: Well, Amy, that’s an excellent point, and it’s a very important point. And it’s not just the minimum wage. On economic issues, whether it’s raising the minimum wage, whether it’s pay equity for women workers, whether it’s investing in rebuilding our infrastructure and creating millions of decent-paying jobs, whether it is making college education affordable and ending this burden of student indebtedness that so many young people have, guess what. The vast majority of the people want change.

But what I think the Republicans have done, with the support of the media, is allow—is prevent us from focusing on those issues. And what the Republicans have done is made this a referendum, is: Are you satisfied with the economy? Well, you know what? Most people, including myself, are not satisfied with the economy today. But what they have done is had us forget where we were six years ago, and also had no discussion—you tell me what you’ve heard about Republican plans for the future on economic issues. Do you think the American people want more tax breaks for the rich and large corporations or cuts in Social Security and Medicare? Of course they don’t. Do you think the Republicans talked about that one bit? Absolutely not. But let me tell you something. If they win control of the Senate, that’s exactly what they will be talking about.

Last point I will make before I have to get off is, what frightens me very much is what Citizens United has done to the politics of this country and the ability of billionaires like the Koch brothers and others to put unprecedented sums of money into elections. And it frightens me very much, because I fear that we may be on the verge of becoming an oligarchic form of society where a handful of billionaires control not just the economy, but the political life of this country. And that’s just something we’re going to have to wrestle with.

AMY GOODMAN: That is Bernie Sanders, the Independent senator from Vermont, who is exploring whether to run for president as he travels the country. We were speaking to him in his home state. 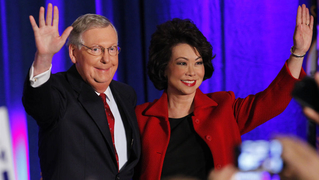