On the Senate floor last week, outgoing Democratic Sen. Mark Udall called for a purge of top CIA officials implicated in the torture program and cover-up, including current Director John Brennan. But as he enters the final days of his Senate term, Udall is facing calls to take action of his own. The Senate findings released last week amount to only a fraction of the full report — 480 heavily redacted pages out of more than 6,000 pages total. The White House has blocked the report’s full release in deference to the CIA’s wishes. That’s sparked demands that Udall invoke a rarely used congressional privilege and make the report public. There is precedent for him to follow: In 1971, then-Alaska Senator Mike Gravel entered more than 4,000 pages of the 7,000-page Pentagon Papers into the Senate record, insisting the public had a right to know the truth behind the Vietnam War. More than four decades later, Gravel joins us to talk about his historic action and why he is now calling on Udall to follow in his footsteps with the full Senate report on CIA torture.

StoryJul 24, 2013How the Pentagon Papers Came to be Published By the Beacon Press Told by Daniel Ellsberg & Others

SEN. MARK UDALL: The CIA has lied to its overseers in the public, destroyed and tried to hold back evidence, spied on the Senate, made false charges against our staff, and lied about torture and the results of torture. And no one has been held to account. … There are right now people serving in high-level positions at the agency who approved, directed or committed acts related to the CIA’s detention and interrogation program. It’s bad enough not to prosecute these officials, but to reward or promote them and risk the integrity of the U.S. government to protect them is incomprehensible. The president needs to purge his administration of high-level officials who were instrumental to the development and running of this program.

AARON MATÉ: As Senator Udall urges President Obama to fire John Brennan, Udall himself faces calls to take action of his own. The Senate findings released last week amount to only a fraction of the full report—480 heavily redacted pages out of more than 6,000 pages total. The White House has blocked release of the full report so far, backing the CIA’s wishes. That’s sparked demands that Udall invoke a rarely used congressional privilege and make the report public. Using the absolute free speech rights for members of Congress, Udall could read the torture report into the Congressional Record. And with his term about to expire after losing re-election, Udall has not ruled that out, saying he will, quote, “keep all options on the table.”

AMY GOODMAN: There is a precedent for Senator Udall to enter the torture report into the public record. In 1971, after The New York Times published portions of the Pentagon Papers, the Nixon administration tried to block the release of further details. But a junior senator from Alaska named Mike Gravel insisted the public had a right to know the truth behind the war. He then read more than 4,000 pages of the 7,000-page document into the Senate record—well, not exactly read. He did, though, put them into the Congressional Record. Senator Gravel spoke to the media about his decision.

SEN. MIKE GRAVEL: When I came into possession of these papers, I looked around, and nobody in government had done anything. The only thing that was being done in government was an effort to stifle and hide this stuff. And it just dawned on me that somebody—if we’re going to have any faith at all in our institutions, somebody from government’s got to be—got to have the same resolve, the same feelings for stopping the killing as Ellsberg did, as the Post did, as The New York Times did, as the St. Louis Post-Dispatch, as all these…

Tonight, right now, we have these documents. We have them under the most stringent circumstances imaginable. Mr. President, Mr. Congressman, there is no … the people must know the full story of what has occurred over the past 20 years within their government. The story is a terrible one. It is replete with duplicity, connivance against the public and public officials. I know of nothing in our history to equal it for extent of failure and extent of loss, in all aspects of the term.

AMY GOODMAN: That’s Senator Mike Gravel in 1971 taking advantage of congressional privilege to disclose the contents of the Pentagon Papers that were then kept secret. Well, today, four decades later, former Senator Gravel is among those calling on Senator Mark Udall to follow in his footsteps and enter the full Senate report on CIA torture into the Congressional Record. Former Senator Gravel joins us now from San Francisco. He’s the former senator from Alaska, serving from 1969 to 1981.

Welcome to Democracy Now!, Senator Gravel. You putting this into the record meant, for the first time, though the Times had reported on it and The Washington Post had reported on the Pentagon Papers, that the full Pentagon Papers were now available to the public. Can you talk about what you’re asking Senator Udall to do now, as he leaves the Senate, having been defeated in Colorado?

MIKE GRAVEL: Well, he may have the opportunity getting his hands on the full report. He doesn’t have to read it into the Senate record. It’s already in the Senate record, because it’s the record of a committee. So you don’t have to duplicate that. What he has to do is exercise the speech and debate clause, take this record of 6,000 pages, put a press release describing why he’s doing it, and release it to the public. It’s that simple.

Most members of Congress, unfortunately, don’t fully understand that there’s three functions that representatives have to perform. One is to inform the public. Two is to legislate. And three is to have oversight. And so, what we have with the release of this document, or the summary, was an oversight. This is—they conducted oversight, and they released it to the public. Madison, Jefferson, James Wilson, George Washington all felt—all felt the most important function of representation was to inform the people as to what their government is doing. And so, this is all that the Feinstein committee has done thus far, but we need to see the entire record so that it could be probed.

I’ll give you an example. I’m very concerned about the egregious corruption that has brought about the incarceration of Dr. Aafia Siddiqui. Now, does her name show up in the 150 names that are in the summary? Or in the several thousand names? Because she has been put in jail because—when she’s not a terrorist. And she suffered five years of rendition at the hands of the American government and the Pakistani government, who was paid off with bonuses for that.

Amy, let me touch upon the arguments that are made with respect to the report that’s already been released, and that is very simply that this is partisan. Well, it’s not partisan. The study began in the committee with both the Democrats and Republicans. But when the Republican leadership began to see what was unfolding, well, they withdrew. They withdrew their staff people working on the documents. Now, what are the documents? And this goes to the issue, “Well, they didn’t interview us.” Well, you’re going to interview these people? Do you think they’re going to tell you the truth? These documents are internal emails, communications, that really indict themselves in the wrongdoing. And that’s what the documents show. So, now, when we talk about the partisanship, it’s not the partisanship. This is not a Democratic deal. This is a very simple, straightforward, under the Constitution, reporting to the American people what their government has done.

And the dialogue that just took place before I came on just shows the level of debasement—debasement—of the American morality that’s taken place over the years with—we’re not talking about people off the street doing this, we’re talking about elites that are deeply involved with the military debasing our morality. And then the comment is, “Well, there’s no reaction from the American people.” There’s no way for the people to react until Election Day. And by that time, it’s too confused.

MIKE GRAVEL: So, all I can say is—

AARON MATÉ: —going back to your decision in 1971 to speak out, I imagine that you were under pressure to not take the action that you did. What factored into your decision, and how did you prepare?

MIKE GRAVEL: Well, I didn’t have to prepare. When I was 23 years old, I was a top-secret control officer in the Communications Intelligence Service. Now, back then, we wiretapped and opened people’s mail wantonly. This was in Europe. Now, move forward, I’m now 42 years old, and I’m in the United States Senate. Nixon sends over the Pentagon Papers to the Senate and to the House.

MIKE GRAVEL: It’s put in a room, under armed guard. And a senator—no staff members allowed, but a senator can’t go in—and even taking notes. Now, at 42 and a United States senator, I can’t do that, but when I was 23, I could do that wantonly. I mean, it just shows you how silly we are trapped in this unbelievable culture of secrecy that is in the military and has permeated through the rest of our culture.

AMY GOODMAN: We have to wrap here, but we’re going to do part two with you, and we’re going to post it online at democracynow.org. Mike Gravel is the former U.S. senator from Alaska, best known for his release of the Pentagon Papers. He’s calling on Mark Udall to do something similar, the senator from Colorado, the outgoing senator, is to get the Senate Intelligence Committee full thousands of pages into the Congressional Record.

That does it for our show. Happy birthday to Renée Feltz. I’ll be speaking tonight in Washington, D.C., at Busboys and Poets at 5:30. Check our website. 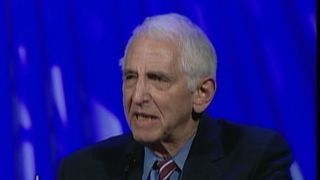