Democracy Now! co-host Juan González discusses his exclusive year-end interview with New York City Mayor Bill de Blasio. “The list of his accomplishments in just one year has shocked even me — a total skeptic after more 35 years of covering urban politics in this country,” writes González in his latest column. “And it’s not just the big issues like education, affordable housing, reform of police-community relations, or new contracts and pay raises for city workers. It’s also a host of less publicized but important measures affecting ordinary New Yorkers. Things like paid sick leave and a living wage for low-income workers. Like the lowest rent increase in memory for 800,000.”

AMY GOODMAN: Juan, before we begin our first story, you had the exclusive year-end interview with New York Mayor de Blasio. You got the first interview of any reporter this year in this first year of his administration for the New York Daily News.

JUAN GONZÁLEZ: Yes, I have a big article in today’s paper on—a series of articles, including my column.

And basically what the mayor told me in a half-hour interview earlier this week was that he saw his major accomplishments of his first rookie year as mayor being the achievement of the universal pre-K program that he rolled out, his—the beginning of an affordable housing program that he expects will produce 200,000 units of affordable housing in the city over the next 10 years, and a series of reforms he’s had on the—related to police-community relations.

Now, obviously, that almost seems like a contradiction, given all the protests over the Eric Garner case and Akai Gurley killings that have occurred over the last few months. And I asked him about that. But de Blasio basically said, “Look, we had instituted a series of reforms, had put in a new inspector general for the police department. We’d sharply reduced stop-and-frisk arrests by the police. We had ordered a sharp reduction in marijuana—low-level marijuana arrests in the city.” And then the Garner case occurred and the Akai Gurley case occurred, and he said it was—the people were—people of New York saw a man killed before their very eyes, and that has created—

JUAN GONZÁLEZ: —an enormous pain among the residents of the city.

But he believes that the reforms that he’s instituted, including what’s going to happen next year, which is the massive retraining of all police officers, aimed at reducing violent incidents in everyday interaction between the police and citizens, that he believes that the long-term effects of this will be a change in the culture and in the relations of the police department. It remains to be seen if that’s going to happen, but he did seem to be optimistic, despite what has happened with Eric Garner and Akai Gurley and the continuing protests that have occurred. And then he also voiced support for the ability of people to continue to protest and express their viewpoints on these issues.

But the other thing is, he had pretty strong words on some other issues, especially on charter schools, which I’ve reported about quite a bit. He blasted the charter school advocates for several times in the past year closing down their schools in the middle of school days and taking all their students and their teachers on protests to Albany, New York. He said they were using children as political pawns and that he was willing to work with charter school advocates, but that they had to follow rules, like making sure that they were educating the same number of English-language learners and special ed kids as the normal public schools, and that his main commitment was to public education, to the public schools, where most of the children of New York City are educated.

AMY GOODMAN: Do you sense a changed man from the man who was elected a year ago?

JUAN GONZÁLEZ: Well, in my column, because I write in the news story about the interview, but then in my column, the point I think I try to raise is that—I’ve been covering urban politics now for 35 years, more than 35 years. And the real shock of de Blasio is that this is a politician who actually, in his first year, has begun to implement many of the promises he made, and that’s unusual in and of itself, and that he’s actually moved forward on his program. And he’s created quite a bit of a ruckus, especially among the wealthy and the invisible government of New York City. But he hasn’t backed down on most of his major issues. So, I think that that’s a pretty unusual situation for a politician.

AMY GOODMAN: I just want to turn for one minute to a clip of Mayor de Blasio talking about his son Dante. You know, the protests around lack of police accountability in the Eric Garner case, New York City Mayor de Blasio said he and his wife Chirlane, who is African-American, fear for their teenage son Dante.

MAYOR BILL DE BLASIO: Chirlane and I have had to talk to Dante for years about the dangers he may face. Good young man, law-abiding young man, who never would think to do anything wrong, and yet, because of a history that still hangs over us, the dangers he may face, we’ve had to literally train him, as families have all over this city for decades, in how to take special care in any encounter he has with the police officers who are there to protect him. And that painful sense of contradiction that our young people see first, that our police are here to protect us and we honor that, and the same time, there’s a history we have to overcome because for so many of our young people there’s a fear, and for so many of our families there’s a fear.

AMY GOODMAN: Dante, de Blasio’s son, became famous to all New Yorkers when he did that ad. A young African American with an afro is talking about supporting de Blasio for mayor, and a lot of people thought it was just a kid on the street that they were doing—using for a campaign ad, and at the end he said, “I support him, and it’s not just because he’s my dad.”

JUAN GONZÁLEZ: Right. And one of the things in the interview also I got the mayor to do was make a New Year’s resolution, because he’s become almost now infamous for his lateness to all events, public events, press conferences, his chronic lateness. And he told me that he would make a New Year’s resolution to be more on time in 2015. So we’ll see if he holds to that.

AMY GOODMAN: Well, we’ll certainly continue to cover a person who’s been called one of the most progressive mayors of a major American city. This is Democracy Now!, democracynow.org, The War and Peace Report. When we come back, a major decision by the governor of New York banning fracking. Then we will look more at the CIA intelligence report and about a new complaint that could lead—could it lead to a trial for Bush administration officials? Stay with us. 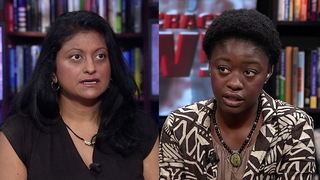