Calls are increasing for the prosecution of George W. Bush administration officials tied to the CIA torture program. On Monday, the American Civil Liberties Union and Human Rights Watch called on Attorney General Eric Holder to appoint a special prosecutor who would investigate the crimes detailed in the Senate Intelligence Committee’s report on the program. On Monday, The New York Times editorial board called for a full and independent criminal investigation. We put the question about prosecution to Col. Lawrence Wilkerson, who served as chief of staff to Secretary of State Colin Powell from 2002 to 2005.

RICHARD CLARKE: I think things that they authorized probably fall within the area of war crimes. Whether that would be productive or not, I think, is a discussion we could all have. But we have established procedures now with the International Criminal Court in The Hague where people who take actions as serving presidents or prime ministers of countries have been indicted and have been tried. So the precedent is there to do that sort of thing.

COL. LAWRENCE WILKERSON: I have to say that after all of my investigations, my students looking into the episodes in case studies and so forth, my own personal experience in that administration, I can only give you an answer that is, I think, utopian, I think it’s far too optimistic, it’s Pollyannaish: yes. But I don’t think for a moment that it’s going to happen.

AARON MATÉ: Colonel, the Senate report says that 26 innocent people were caught up in the program, and former Vice President Cheney addressed this. Speaking to Meet the Press, he was asked about the report finding that 26 of the 119 prisoners were innocent. This was his response.

DICK CHENEY: I’m more concerned with bad guys who got out and were released than I am with a few that in fact were innocent.

CHUCK TODD: Is that too high? Is that—you’re OK with that margin for error?

DICK CHENEY: I have no problem as long as we achieve our objective.

AARON MATÉ: That was Chuck Todd questioning former Vice President Dick Cheney. Colonel Wilkerson, can you respond to what Cheney said? And also address the issue of innocence. Do you think that the 26 figure is too low?

COL. LAWRENCE WILKERSON: Definitely too low, when you consider the entire prison population. As I’ve said many times in the past, I am quite confident that probably a half to two-thirds, possibly even more, of those initially put in Guantánamo, some 700-plus people, were just swept up on the battlefield, through bounty process or whatever, and were basically innocent of anything other than being in the wrong place at the wrong time.

But let’s look at what Dick Cheney said. This is pure Cheney. This is Cheney and Rumsfeld’s tactic. They immediately deflect the question, which is a solid question which they simply can’t answer. They immediately deflect it to the other side of the equation, whether it’s the ticking time bomb argument, which is a fallacious and stupid argument if you really parse it well, or whether it’s, as Cheney did here, that, you know, 75 percent were guilty, and any one of those might have done something, and so I was good in what I did. This is Cheney, amoral, amoral Cheney.

What you must look at, too, and what I wish that interrogator of Cheney had looked at, is, we know—we know positively that a minimum—and I suspect it’s higher—of 39 people died in the interrogation process. Why does no one ever mention that? We know, too, that in some of those cases the military or civilian coroner involved found the cause of that death to be homicide. The most famous case, of course, Alex Gibney in his documentary, Taxi to the Dark Side, Dilawar in Afghanistan, is known about, but even that’s been forgotten. We murdered people whom we were interrogating. Isn’t that the ultimate torture? No one ever asks Dick about that.

AMY GOODMAN: Colonel Wilkerson, that number, 39 people killed by torturers, where do you get that number, and where were they killed?

COL. LAWRENCE WILKERSON: That number comes from Human Rights First’s initial report on command responsibility in the interrogation program, which I believe came out quite early, 2006-2007. It was 39 people who died in detention. Now, some of them died of natural causes. They had a heart attack or whatever. Of course, the heart attack might have been brought on by the very strenuous process they were going through, including hypothermic rooms and stress and so forth and so on. But nonetheless, several of those were judged homicides. In other words, either the contractor for the CIA, the CIA or the military individual conducting the interrogation was responsible for the death of that person because of what they were doing to them. That’s never talked about anymore.

AMY GOODMAN: Final question. At the time that Colin Powell gave that speech, that infamous speech that he would later call a blot on his career, February 5th, 2003, at the U.N., there were many who were saying, including weapons inspectors in Iraq, that the allegation of weapons of mass destruction was not true. What would have penetrated the bubble for you, Colonel Wilkerson—for example, to peace activists and others—to be able to reach you, to reach Colin Powell? Why could they continue to say this, with lots of evidence behind it, yet you didn’t hear it?

COL. LAWRENCE WILKERSON: I think there was objection that made its way through to us. After all, we had an intelligence and research group at the State Department, INR, and an assistant secretary, Carl Ford, who objected rather strenuously to one-third of the major elements of Powell’s presentation, the most dangerous element, if you will—the active nuclear program. So, we had opposition.

AMY GOODMAN: Do you think John Brennan, head of the CIA, should immediately be fired?

COL. LAWRENCE WILKERSON: I think John Brennan should have been fired a long time ago. Long time ago.

“The War to Start All Wars”: Did U.S. Invasion of Panama 25 Years Ago Set Stage for Future Wars?

NEXT“The War to Start All Wars”: Did U.S. Invasion of Panama 25 Years Ago Set Stage for Future Wars? 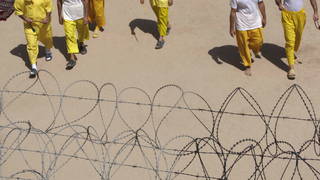