“The War to Start All Wars”: Did U.S. Invasion of Panama 25 Years Ago Set Stage for Future Wars?

This month marks the 25th anniversary of the U.S.-led invasion of Panama. On December 20, 1989, President George H.W. Bush launched Operation Just Cause to execute an arrest warrant against Panamanian leader Manuel Noriega, once a close U.S. ally, on charges of drug trafficking. During the attack, the United States unleashed a force of 24,000 troops equipped with highly sophisticated weaponry and aircraft against a country with an army smaller than the New York City Police Department. We discuss the Panama invasion and how it served as a template for future U.S. military interventions with three guests: We are joined by Humberto Brown, a former Panamanian diplomat, and Greg Grandin, a professor of Latin American history at New York University and author of “The Empire of Necessity: Slavery, Freedom, and Deception in the New World.” His new article for TomDispatch is “The War to Start All Wars: The 25th Anniversary of the Forgotten Invasion of Panama.” We also speak with Col. Lawrence Wilkerson, former chief of staff to Secretary of State Colin Powell.

AARON MATÉ: This month marks the 25th anniversary of the U.S.-led invasion of Panama. Early in the morning of December 20th, 1989, President George H.W. Bush launched Operation Just Cause, sending tens of thousands of troops and hundreds of aircraft into Panama to execute an arrest warrant against its leader, Manuel Noriega, on charges of drug trafficking. General Noriega was once a close ally to Washington and on the CIA payroll. But after 1986, his relationship with Washington took a turn for the worse. During the attack, the U.S. unleashed a force of 24,000 troops, equipped with highly sophisticated weaponry and aircraft, against a country with an army smaller than the New York City Police Department.

AMY GOODMAN: We’re joined now by three guests: Humberto Brown, former Panamanian diplomat; Greg Grandin, professor of Latin American history at New York University, his most recent book, The Empire of Necessity: Slavery, Freedom, and Deception in the New World, his most recent article for TomDispatch, “The War to Start All Wars: The 25th Anniversary of the Forgotten Invasion of Panama”; and still with us in Washington, D.C., retired Colonel Lawrence Wilkerson, special assistant to the Joint Chiefs of Staff, which was chaired by General Colin Powell at the time of the invasion.

Greg Grandin, let’s start with you. Why is this anniversary—why the 25th anniversary? What do you have to say, going back 25 years ago, is the most important thing to understand about what happened?

GREG GRANDIN: That the invasion of Panama took place a month after the fall of the Berlin Wall, and it really set the terms for future interventions in a number of ways. One, it was unilateral. It was done without the sanction of the United Nations, without the sanction of the Organization of American States, which was a fairly risky thing for the United States. It didn’t occur often, even during the Cold War. Two, it was a violation of national sovereignty, which of course the United States did often during the Cold War, but it was a violation—the terms of the violation changed. It was done in the name of democracy. It was argued—it was overtly argued that national sovereignty was subordinated to democracy, or the United States’ right to adjudicate the quality of democracy. And three, it was a preview to the first Gulf War. It was a massive coordination of awesome force that was done spectacularly for public consumption. It was about putting the Vietnam syndrome to rest.

AMY GOODMAN: Talk about the effects, Humberto Brown—you were a Panamanian diplomat at the time—the effects of the U.S. invasion. The Pentagon said hundreds of people died; Panamanians said something like 3,000 people died in this attack. How long did it last?

HUMBERTO BROWN: Well, Amy, just in the first hour, we had had 200 and—about close to 400 bombs were dropped after midnight, devastating poor neighborhoods—El Chorrillo, Marañon, Caledonia. So it was devastating, because, one, the majority of the people who suffered consequences of it were poor people in the urban areas. And the elite, who was complicit to this, were—their neighborhoods were protected. They were safe. Some of them was removed from their homes and were placed in the Canal zone. So it was two different approaches. One was intimidation and literally expressing no concern for the poor, in a way. So we think it was very devastating.

And it’s interesting that at 25 years, this is the first time one of the presidents are talking about the need to answer the question about how many people died, how many people disappeared. And on Saturday, the new president, President Varela, said that he wanted to create a special commission to investigate what happened during the invasion, how many people died, because they’re attempting to get a national reconciliation. The debate—there’s always a debate in Panama, if we’d celebrate this as a day of mourning. The president calls it a day of reflection, and there’s a sector that call it a day of liberation. So we still have a conflicting view of the impact of this invasion in Panama.

AARON MATÉ: And, Colonel Wilkerson in Washington, you were an aide to Colin Powell during this time. What’s your understanding of why this attack took place?

COL. LAWRENCE WILKERSON: Well, my understanding was the understanding that the press reported. It was everything from attacks on or threatened attacks on our officers and men and women in the military in Panama to drug trafficking and extensive contacts with drug gangs that had grown much larger than the contacts with the CIA had ever contemplated and so forth.

But I’ve got to say that in what I teach, you could learn a lot about U.S. operations in its own hemisphere. This was an operation, not so unique, as one of the speakers just suggested. Go back and look at Marine General Smedley Butler, in his testimony to the then Armed Forces Committee in the Congress, where he essentially compared himself to Al Capone, and he said, “Al Capone operated on one continent, I operated on two. I was a criminal for American commercial interest.” We have invaded someone or interjected our military force into someone’s territory in the Caribbean about 35 times since 1850. This is our hemisphere. The Monroe Doctrine is still operational. And we seem to think that we can interfere in anyone’s country at any time. 2002, we tried to foment a coup in Caracas to overthrow Hugo Chávez. This is nothing new. This is the way America operates in its own hemisphere.

AMY GOODMAN: We have 10 seconds, Greg Grandin, but then we’ll continue this and put it online.

GREG GRANDIN: I agree completely. The Cold War, though, did force the United States to operate under the legitimacy of multilateralism, and that’s what gets swept away with Panama, with the invasion of Panama. And it does set the terms for future invasions. But I agree completely.

AMY GOODMAN: Of course, General Noriega was taken prisoner at the time and brought to the United States. And in our post-show interview, we will continue that discussion about why the U.S. changed its view of him, from the U.S.'s man to the U.S.'s prisoner. Greg Grandin and Humberto Brown and Colonel Wilkerson, thanks so much for joining us. Part two online at democracynow.org. 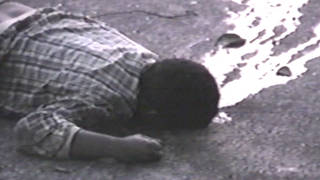