Peace Activist Sentenced for Protesting at Drone Base Near Syracuse, NY

A longtime peace activist was sentenced today to one year conditional discharge for demonstrating outside the gates of New York’s Hancock Field Air National Guard Base, which is used to remotely pilot U.S. drone attacks. Mark Colville faced up to two years in jail stemming from his arrest last December. More than 100 people have been arrested over the past five years as part of a nonviolent campaign organized by the Upstate Drone Coalition. Hours before he learns his fate, Colville joins us to discuss his activism and why he opposes the U.S. drone war. [Editor’s Note: This summary has been updated to reflect today’s sentencing which occurred after our broadcast.]

JUAN GONZÁLEZ: We continue looking at the U.S. drone program by going now to Syracuse, where a longtime peace activist and father of four is facing up to two years in prison for demonstrating outside the gates of the Hancock Field Air National Guard Base, which is used to remotely pilot drones. Mark Colville is heading to court today to be sentenced, stemming from his arrest last December.

AMY GOODMAN: Mark Colville’s action was part of a five-year-old nonviolent campaign organized by the Upstate Drone Coalition here in New York. Over that time, more than a hundred people have been arrested. Mark Colville is a member of the Amistad Catholic Worker in New Haven, Connecticut.

Mark, welcome to Democracy Now! Within a few hours, you’ll learn your fate, if you face two years in prison. Tell us exactly what you did. Tell us the date, the time and what your action was.

MARK COLVILLE: Thank you for having me on the show, Amy and Juan. Well, essentially, what I did almost a year ago now—it was December 9th of 2013—I attempted to intervene on behalf of a family in Afghanistan that has experienced the unspeakable trauma of witnessing loved ones being blown to pieces in a drone strike. One member of that family, a man named Raz Mohammad, last year wrote a personal plea to the United States courts and the government, as well as the military, to stop these drone strikes on his people.

AMY GOODMAN: I want to interrupt you for just one minute, because—

MARK COLVILLE: So, I and two—

AMY GOODMAN: Mark, I want to interrupt because we do have a clip of Raz Mohammad in his own words.

RAZ MOHAMMAD: [translated] I think drones are not good. I remember how, in my village, a drone attack killed my brother-in-law and four of his friends. It was truly sad. A beautiful life was buried, and the sound of crying and sorrow arose from peaceful homes. I say that this is inhumane. Today, the idea of humanity has been forgotten. Why do we spend money like this? Why don’t we use alternative ways? The international community says that drones are used to kill the Taliban. This is not true. We should see the truth. Today, it’s hard to find the truth, and no one listens to the ordinary voice of the people.

AMY GOODMAN: Those are the words of Raz Mohammad from Afghanistan. So, talk about now, Mark Colville, what you did.

MARK COLVILLE: Well, we took Raz’s written plea, and we walked peacefully and orderly to the outside gate of the 174th Attack Wing at Hancock Air Field, with the sole purpose of trying to deliver this plea directly to one of the base commanders, whose name is Colonel Earl Evans. We brought—it was Advent, the season of Advent in the Christian churches, and we brought along a litany of prayers for saints and martyrs. We brought poinsettia and a dozen roses along with Raz’s plea, and we simply wanted to have that received by the base commander.

The base personnel indicated that Colonel Evans was not going to come out, and so then we simply asked if we could have Raz’s plea received and acknowledged. At that point, the military personnel were ordered not to engage us anymore in conversation. And so we decided to just remain there until we received a response. And about an hour later, the local police came and arrested us.

I should say that the drone base located within the jurisdiction of this court, where I’m appearing today for sentencing, it is operating beyond the reach of law. And that was really the reason why I chose to go to the base. I wanted Raz’s plea to be heard in a court, and this appeared to be the only way that a court would hear it. And, in fact, it was read in open court by one of the military personnel who I cross-examined.

JUAN GONZÁLEZ: And, Mark, when you hear this previous segment that we had, the report by Reprieve, that an average of 28 unidentified people are being killed for every single targeted drone strike, your reaction?

MARK COLVILLE: Well, you know, we’ve known, and it’s been reported here on Democracy Now! in previous reports over the years, that, as I said, the drone program operates—it’s based on a foundation of criminality. I mean, the United States government, through its drone program, is claiming the legal right to targeted assassinations, extrajudicial killings, indiscriminate killing and the targeting, deliberate targeting, of civilians. For example, even the military admits that one of its modes of operation in drone strikes is something that they have called “double tapping,” which is that after striking a target, the drone is directed back to that same target 20 minutes or a half an hour later in order to strike again after first responders have come to help the wounded. And so, it’s on a foundation of criminality. And as we’ve experienced in the numerous public actions and arrests at Hancock Air Field, this program operates beyond the reach of courts and law. And what we’re trying to do is to get courts to engage the criminality in which the United States government is engaged through the drone program.

AMY GOODMAN: How unusual is Hancock? And how central is it to the drone program?

MARK COLVILLE: Well, in large part, the drone program is operated in secrecy. We do know that the Hancock drone base, the 174th Attack Wing, focuses its missions on Afghanistan. And they’re weaponized drones. They carry Hellfire missiles and 500-pound bombs. It’s very difficult to get specific information about which attacks are launched or directed from which drone base. There are about a dozen throughout the United States that we know about. And we’re trying to, you know, just bring this to the light. We’re trying to have this brought to the scrutiny of the courts. Now, I’m going to court this afternoon about seven hours from now. I was convicted of five separate charges for simply walking peacefully to the front outside gate of the drone base.

MARK COLVILLE: Five charges. Two counts of disorderly conduct, one of trespass, which, by the way, are conflictual charges because the one requires that you—the act take place on public property and the other on private property. Obstruction of governmental administration, which is the obstruction of lawful government administration, which we contend, and I contended in court, that the operation behind the gates of Hancock is not lawful. And I was also charged with a contempt of court charge based on kind of a cynical manipulation of the law that this court has engaged in by issuing orders of protection on behalf of the base commander, Colonel Evans, against protesters, as if we are a physical threat to Colonel Evans. So, they’ve actually manipulated these domestic violence laws, essentially, to try to intimidate people and keep them from going to exercise their rights outside the base.

AMY GOODMAN: Mark, we just have 30 seconds, but as we wrap up and you face two years in prison, what are you telling your kids, your four children?

MARK COLVILLE: Well, yeah, I’m telling my kids—and they understand—that whatever hardships that we’re about to endure through the injustice of this court, that we should keep Raz Mohammad’s family ever in our vision and try to unite our own sufferings to the incredible sufferings that he and his extended family have gone through. And that’s the way that we go forward. And we’re well prepared for whatever the judge decides to do. As I intend to tell the judge, anything that he does in the court today makes no condemnation of my actions. The court is condemning itself by stopping up its ears to the law.

AMY GOODMAN: Mark Colville, I want to thank you for being with us, with the Amistad Catholic Worker in New Haven, Connecticut, being sentenced today for protesting outside the Hancock Field Air National Guard Base outside Syracuse, New York. And thanks very much to our friends at the WCNY, the PBS station in Syracuse, New York. This is Democracy Now!, democracynow.org, The War and Peace Report. When we come back, we’re going to look at what’s happening in Mexico. And also, on the road to the U.N. climate summit, what happened to a group of environmentalists as they try to take their school bus through Ecuador? Stay with us. 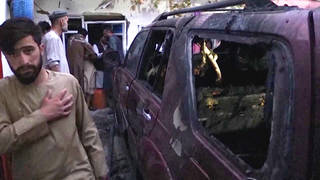