A new exposé in The Nation magazine reveals that much of the lobbying money spent on shaping policy in Washington is going unreported. For the third straight year, the official amount spent by lobbyists has declined, and the number of registered lobbyists is the lowest it’s been in more than a decade. But these numbers are misleading, says reporter Lee Fang, author of the “The Shadow Lobbying Complex: On paper, influence peddling has declined. In reality, it has gone underground.”

JUAN GONZÁLEZ: We end today’s show with a look at how much of the lobbying money spent on shaping policy in Washington is going unreported. For the third straight year, the official amount spent by lobbyists has declined, and the number of registered lobbyists is the lowest it’s been in more than a decade.

AMY GOODMAN: But a new cover story in The Nation magazine reveals how these numbers are misleading. It’s headlined “The Shadow Lobbying Complex: On Paper, Influence Peddling Has Declined. In Reality, It Has Gone Underground.”

For more, we go to San Francisco, where we’re joined by its author, Lee Fang, reporting fellow with the Investigative Fund at The Nation Institute.

Welcome back to Democracy Now!, Lee. Just lay out just what this is, the shadow lobbying complex.

LEE FANG: Good morning. My new story for The Nation looks into federal lobbying laws and the state of American lobbying. As you mentioned, on paper, the lobbying industry is decreasing. The number of registered lobbyists are shrinking. The amount spent is going down precipitously every year. But in reality, the influence industry, as it’s known, is growing very quickly. It’s becoming more sophisticated. Companies are spending more and more to influence policy. And in many ways, corporations are extending their reach and hiring as many lobbyists as they can as this industry grows.

JUAN GONZÁLEZ: Well, when President Obama was campaigning in 2008 and he came into office, he declared a virtual war, supposedly, on lobbyists, had an executive order banning lobbyists from his administration. Has that had anything to do with these lobbyists attempting now to go underground in terms of how they spend their money and how they influence legislation?

LEE FANG: That’s right. And this is one of the big ironies of the Obama administration. President Obama campaigned vigorously in 2008 against the influence and the outsized influence of corporate lobbyists in American politics. He promised to drain the swamp and to come into office and enact stronger ethics reforms. But the only real enforcement or official action that he took was an executive order right when he got into office to not allow registered lobbyists into his administration. The catch was, many lobbyists simply de-registered, pushing the system more into the shadows, more into the darkness, and leading to where we are today. And the administration, at the same time, started issuing exemptions to still allow registered lobbyists into the Obama administration. So, little has changed. If anything, Obama’s only action on lobbying has made the system worse.

AMY GOODMAN: Lee Fang, you encountered Zach Wamp, a former Republican politician, telling members of Congress he manages operations for Palantir, a controversial big data company that does work for intelligence agencies. I want to play a clip of the video of you questioning him about the scandals associated with the firm, which include allegations that they spied on activists. This is a clip of your encounter.

LEE FANG: Former Congressman, can I ask you, what are you doing now for Palantir?

ZACH WAMP: What am I doing for Palantir?

ZACH WAMP: What do you know about Palantir?

LEE FANG: I just heard you say you’re working for Palantir a couple days a week.

ZACH WAMP: No, a couple days a month.

ZACH WAMP: It’s going great. It’s a great Silicon Valley-based company that does a lot of private sector solutions that now the—have a lot of government applications on the intelligence side—big data—saving the government a lot of money. So I’m kind of overseeing their operations up here.

LEE FANG: Have you followed the story that they were also working for some private interests, like the U.S. Chamber, to develop a domestic spying program on liberals?

ZACH WAMP: I don’t know anything about that.

LEE FANG: Do you think there’s any type of civil liberty problem with these big data firms that are working for spy—or intelligence—agencies, then using that same technology in the private sector?

ZACH WAMP: I know nothing about that, so [inaudible].

LEE FANG: OK. May I ask you how much they’re paying you?

ZACH WAMP: I don’t know anything about what you’re talking about.

AMY GOODMAN: That was Zach Wamp, the former Tennessee Republican congressman, speaking with our guest today, Lee Fang. Talk about the significance—it was a little hard to hear—of what you were saying and he was saying about Palantir. And can you talk about spying on activists, on unions?

LEE FANG: Right. Zach Wamp is a former Republican congressman from Tennessee, and like dozens of former congressmen and senators who have promised not to become lobbyists, Wamp left Congress and said he would start a business development firm, that he would not engage in lobbying, that he’s going back to Chattanooga, Tennessee. But as this video shows, I found Wamp on Capitol Hill talking to current members of Congress about Palantir. And as I talked to Wamp after his discussion with lawmakers, he said that he’s overseeing Palantir’s operation on Capitol Hill.

Now, Palantir is a very controversial company who’s backed by the CIA, a lot of venture capitalists here in the Silicon Valley area. And it works for intelligence agencies to synthesize large amounts of data. And there was a large—there was a scandal in 2011 that I helped break when I was at ThinkProgress. Palantir and two other defense contractors created a proposal for the United States Chamber of Commerce to develop a domestic spying program, using the same government-backed technology to spy on unions, on different labor activists and progressive media outlets. It’s not clear exactly how far that proposal went, but they did start gathering intelligence on all types of different left-of-center organizations and individuals.

JUAN GONZÁLEZ: I want to ask you a little bit more about this morphing of the lobbyists into other forms of influence peddling. For instance, the American League of Lobbyists actually changed its name; they rebranded themselves as the Government Relations Professionals. This reminds me a little bit of United Fruit Company changing its name to Chiquita. This rebranding of these lobbyists, what other examples do you have of how they continue to do influence peddling under another name?

LEE FANG: That’s right. You know, I think if you look at the polls, and if you actually listen to some of these seminars from the large lobbying organizations and firms, they understand that the American public is incredibly upset with the level of big money in politics, of the influence of lobbying in politics. And they’ve adapted by this, not by reforming, not by changing their behavior or using better reporting standards; they’re simply massaging their image, and they’re de-registering. So, this example of changing the name from League of Lobbyists to Association of Government Affairs Officials—Professionals, excuse me—is emblematic of that. Many big firms, instead of calling their lobbying staff “lobbyists,” they’re calling them public affairs directors, government affairs associates, other euphemisms, but it’s largely a smokescreen for the exact same type of behavior that’s gone on for a very long time.

AMY GOODMAN: Lee, we only have 30 seconds. You have so many amazing examples in your piece, “The Shadow Lobbying Complex.” Bangladesh and TPP, if you can talk about them very quickly?

LEE FANG: These two very big, controversial issues are another area where corporations are spending tens of millions of dollars that are not being reported on lobbying disclosure forms. No one really knows where the money is coming from, but large firms are hoping to impact both the situation in Bangladesh and the Trans-Pacific Partnership deal, again, using these public affairs or government affairs officials to peddle influence without disclosure.

AMY GOODMAN: Well, Lee Fang, we want to thank you for being with us. The new cover story at The Nation is called “The Shadow Lobbying Complex: On Paper, Influence Peddling Has Declined. In Reality, It Has Gone Underground.” We’ll link to it at democracynow.org.

And that does it for our broadcast and our 18th anniversary week. Again, send us your thoughts. Go to our website at democracynow.org. We look for photos. We look for videos. 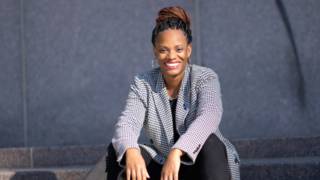