Texas has executed death row prisoner Ray Jasper after obtaining a new supply of pentobarbital, the drug it uses for executions, just days before its current batch was set to expire. Meanwhile, Oklahoma has postponed two executions because it lacks the drugs required to put prisoners to death. As death penalty drugs become scarce, the assistant Oklahoma attorney general has joked with a Texas colleague that he might be able to help Texas get the drugs in exchange for 50-yard-line tickets for a top college football game between the University of Oklahoma and the University of Texas. The exchange is revealed in email obtained by The Colorado Independent, which also exposed how Oklahoma injected leftover lethal drugs into the bodies of dead prisoners. We are joined by Susan Greene, editor of The Colorado Independent.

JUAN GONZÁLEZ: We turn now to new developments in the shortage of lethal injection drugs used to execute prisoners. On Wednesday night, Texas put Ray Jasper to death in its fully stocked execution chamber for his role in a 1998 murder. Jasper’s case drew worldwide attention after the website Gawker published one of his letters. This came after Texas announced it obtained a new supply of the drug it uses for executions just days before its current batch was set to expire.

Meanwhile, Oklahoma announced Tuesday it would have to postpone two executions because it lacks the drugs required to put prisoners to death. After Texas, Oklahoma is tied with Virginia for having carried out the second most number of executions in the country, and has put about five prisoners to death each year since 1990. In January, it executed Michael Lee Wilson using a controversial mix of drugs that civil rights groups say constitutes cruel and unusual punishment. Twenty seconds into his execution, his final words were, quote, “I feel my whole body burning.”

AMY GOODMAN: The delay in Oklahoma’s executions comes as newly revealed records show state officials joking about wanting perks for helping Texas find execution drugs during an earlier shortage in 2011. In one email, Oklahoma’s assistant attorney general, Seth Branham, dubbed the group of Oklahoma officials who had been working to procure the drugs “Team Pentobarbital,” and wrote he would, quote, “forgive and forget with sideline passes for Team Pentobarbital … plus an on-field presentation of a commemorative plaque at halftime recognizing Oklahoma’s on-going contributions to propping up the Texas system of capital punishment.” The documents obtained by The Colorado Independent also show Oklahoma injected leftover lethal drugs into a dead prisoner’s body for what officials called “disposal purposes.”

For more, we go to Denver, Colorado, where we’re joined by the editor of the new exposé on those documents, Susan Greene, longtime reporter and columnist, formerly with The Denver Post, now editor of The Colorado Independent.

Welcome back to Democracy Now!, Susan. Explain what you exposed.

SUSAN GREENE: We exposed these flippant emails back and forth between assistant attorneys general, who felt—had felt thwarted by Texas. There’s a shortage in the country of lethal injection drugs, and so they’re all sort of scrambling to find them so they can kill people on time. And Texas had apparently not supplied Oklahoma with the drugs it needed in an earlier execution. And Texas, a few years ago, was asking for help from states all around the country for how to deal with the shortage. And so these attorneys general in Oklahoma, feeling a little embittered by the lack of help from Texas, were joking that, as you said, they wanted, in exchange for their help, 50-yard-line tickets to a football game between Oklahoma and Texas. And then another colleague said, “Actually, you know, we want more than that. They should—Texas should throw the game for four years, for four years, in exchange for our help.” And then, they went on to say, “Yes, you know, we should be brought onto the field during halftime and sort of lauded and celebrated for our valor in helping Texas carry out its tradition of death penalty injections, lethal injections.” And then they actually took it further and said, “You know, for this, we should actually get passes to tollways and other sort of roads that cost money in Texas.” So—

JUAN GONZÁLEZ: Susan, why would—your news organization is in Colorado.

JUAN GONZÁLEZ: Why are you the one that is exposing what’s going on between Oklahoma and Texas? Could you talk about what left you having to report this?

SUSAN GREENE: Yes. There’s a freelancer in Texas, very excellent reporter named Katie—I’m sorry, in Oklahoma, named Katie Fretland, who had obtained these documents about two years ago and sort of sat on them, largely because she felt that nobody in Oklahoma was going to use them. There wasn’t a lot of investigative reporting about the death penalty or about lethal injections in Oklahoma, even though there’s a state law there that says all information about these injections is shrouded in secrecy. And that law—as it commonly happens among reporters, when you rub up against a law that says you can’t have something, you ask for it. And Katie asked for it.

And in that Freedom of Information request, she got those emails, plus information about what Amy mentioned, the fact that they’re injecting—it’s not just one person this happened to; it’s nine people, at least. They’re injecting the leftover drugs from these executions. So there are—these executions take place with what’s known as a three-drug cocktail. The first one is supposed to anesthetize the person. The second one is supposed to stop the breathing. And the third one is supposed to stop the heart. That’s kind of how it’s supposed to work. That’s what the protocol is. That’s how it happened before the big drug pharmacies that were supplying these drugs pulled them off the market, and before the states had to sort of scramble and go toward kind of nonregulated drugs. So there are all sorts of things happening in executions that are a little bit funky and a little bit unexpected. They’re not going as smoothly as they had in the past.

AMY GOODMAN: Susan, we don’t have much time. I was wondering if you could talk about more of the exposé around Oklahoma injecting an executed prisoner with leftover drugs—

SUSAN GREENE: Exactly. So they had these syringes, and basically, the men would die with the first drug, the anesthetic. They would die of an overdose, which is really not how it’s intended. And because they had these two other syringes in his three-drug cocktail, to stop their breathing and to stop their heart, instead of just throwing them out, they injected them into the dead bodies for disposal purposes. So it didn’t just happen in one case; it happened in nine cases. And we’re pretty sure that the families of those men don’t know that that happened. Even though they were watching the procedure, they don’t know that those men were already dead. And instead of just throwing the syringes out and throwing the drugs out, they’re just injecting them into their bodies to get rid of them.

AMY GOODMAN: So you leftover drugs, and you don’t have enough execution drugs, these states—a lot to do with European companies saying, “You can’t use our drugs for the purpose of executing prisoners, because we believe the death penalty is wrong”?

SUSAN GREENE: Yes, which has left the states turning to compounded—compounding pharmacies, which are kind of mom-and-pop pharmacies around the country that sort of whip up batches of lethal injections, essentially unregulated. And that’s why you’re seeing these unusual kind of side effects or responses to men being executed, because no one really knows—these drugs haven’t been tested. No one really knows what the effect will be or how quickly they’ll act. And all of these states are bound by the Eighth Amendment, which ensures the right against cruel and unusual punishment. So, the question—

AMY GOODMAN: Susan, finally, a quick question in Colorado: The head of the Colorado prisons just spent a day in solitary confinement?

AMY GOODMAN: Susan, we’re going to have to leave it there, and we thank you so much for being with us. Susan Greene, editor of The Colorado Independent. We’ll link to the reports at democracynow.org. 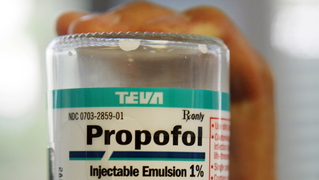