Can Any Court Hold U.S. Accountable for Killing Americans Overseas with Drone Strikes?

A federal judge has dismissed a lawsuit challenging the U.S. government’s killing of three Americans in Yemen drone strikes. The case was filed by the families of Samir Khan, Muslim cleric Anwar al-Awlaki, his teenage son, Abdulrahman, accusing top U.S. officials of unlawful killings. But on Friday, U.S. District Court Judge Rosemary Collyer ruled the victims’ constitutional rights were never violated and said the U.S. officials involved cannot be held liable. We get reaction from Maria LaHood, a senior staff attorney at the Center for Constitutional Rights and one of the attorneys working on Anwar Al-Awlaki’s case. “The courts have abdicated their roles with torture, they’ve abdicated their roles with indefinite detention,” LaHood says. “Here we thought finally the courts would uphold the Constitution with the killing of American citizens.”

AARON MATÉ: A federal judge has dismissed a lawsuit challenging the government’s killings of three Americans in Yemen by drone strikes. The families of Muslim cleric Anwar al-Awlaki, his teenage son Abdulrahman, and of Samir Khan had filed a suit accusing top officials of unlawful killings. But on Friday, U.S. District Court Judge Rosemary Collyer ruled the victims’ constitutional rights were never violated, and said the officials involved can’t be held liable.

AMY GOODMAN: Despite that ruling, Judge Collyer also added, quote, “The powers granted to the Executive and Congress to wage war and provide for national security does not give them carte blanche to deprive a U.S. citizen of his life without due process and without any judicial review.”

Well, for more, we’re joined by Maria LaHood, senior staff attorney at the Center of Constitutional Rights, one of the attorneys working on Anwar al-Awlaki’s case.

Welcome to Democracy Now! We just have a few minutes, but explain the significance of Judge Collyer’s ruling.

MARIA LAHOOD: Well, the court, essentially—I mean, we rely on the courts to uphold our rights under the Constitution, especially our right to due process, not to be killed. And, essentially, she did give the executive carte blanche to kill anyone it deems to be a terror suspect, far from any battlefield, with no due process, even if they don’t really—even if they don’t pose an imminent threat. So, it’s not only—you know, she said that we don’t give the courts carte blanche—she doesn’t give the executive carte blanche, but in fact she decided—she refused—she refused to allow a claim in the area of national security even for a violation of the Constitution, even for a killing of an American citizen.

AARON MATÉ: With this ruling, are there any more legal challenges to pursue in order to obtain the right to due process?

MARIA LAHOOD: Well, I mean, this is—you know, there have been—the courts have abdicated their roles with torture. They’ve abdicated their roles with indefinite detention. Here, we thought, you know, finally, the courts would uphold the Constitution with the killing of American citizens. The victims’ families have been through an extraordinary amount. They have suffered an unimaginable loss, having their sons and their grandson—

AMY GOODMAN: Who did you sue?

MARIA LAHOOD: Well, we have the—you know, the secretary of defense, the CIA director. We also sued other members of the military, the JSOC director, as well as the Special Ops Command director.

AMY GOODMAN: The court said that government officials must be trusted when they target U.S. citizens abroad?

MARIA LAHOOD: Must be trusted, yes. And, you know, this is outrageous. Obviously, there’s—they can’t be trusted with anything. You know, there’s no transparency. We have no idea who they’re killing, why they’re killing people. There are no legal standards that have been publicly released. They have disclosed a few about U.S. citizens, not in active hostilities, but they refuse to disclose the memos, the classified memos. So we know that U.S. officials can’t be trusted with this authority.

AMY GOODMAN: Where does this go from here? What are the implications of this for other cases? And are government officials like these and higher up being sued in other cases?

AMY GOODMAN: You can see all of our coverage of the cases of Samir Khan and the Awlakis at democracynow.org. Maria LaHood, I want to thank you very much for being with us, staff attorney with the Center of Constitutional Rights. 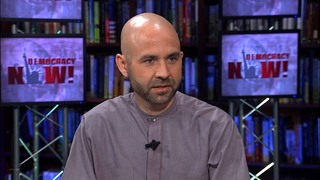