We look at a case that is being called the “trial of the century” in how poor countries repay sovereign debt. This week, the U.S. Supreme Court rejected an appeal from Argentina over its $1.5 billion debt in a ruling critics say validates predatory behavior by so-called “vulture funds.” The case involves hedge funds that bought up Argentina’s debt at bargain rates after its financial crisis more than a decade ago. After Argentina defaulted on its debts, the vast majority of its creditors agreed to slash the value of their holdings. But NML Capital and other firms refused to accept the deal, instead seeking full repayment. Monday’s ruling leaves in place a lower court decision ordering Argentina to pay the companies. Argentine President Cristina Fernández de Kirchner has called the firms’ actions “extortion.” We are joined by Eric LeCompte, executive director of Jubilee USA Network.

JUAN GONZÁLEZ: We turn now to Argentina, what’s being called the “trial of the century” in how poor countries repay sovereign debt. Earlier this week, the U.S. Supreme Court rejected an appeal from Argentina over its $1.5 billion debt in a ruling critics say validates predatory behavior by so-called “vulture funds.” The case involves hedge funds that bought up Argentina’s debt at bargain rates after its financial crisis more than a decade ago. After Argentina defaulted on its debts, the vast majority of its creditors agreed to slash the value of their holdings. But NML Capital and other firms refused to accept the deal, instead seeking full repayment. Monday’s ruling leaves in place a lower court decision ordering Argentina to pay the companies. Argentine President Cristina Fernández de Kirchner addressed the nation after the ruling.

PRESIDENT CRISTINA FERNÁNDEZ DE KIRCHNER: [translated] I think that you need to distinguish between what is a business and what is an extortion. I think there are two concepts that are completely different. All of the government, all the country, all the directors, in the areas of the environment and policies, need to be open to negotiating. What no president can do in a sovereign country is to subject its country, its people to extortion.

AMY GOODMAN: In a statement, the anti-poverty network Jubilee USA called the court ruling “a devastating blow,” saying, quote, “These hedge funds are equipped with an instrument that forces struggling economies into submission.”

For more, we go to Washington, D.C., where we’re joined by Eric LeCompte, the executive director of Jubilee USA Network.

Eric, welcome to Democracy Now! Talk about the significance of the Supreme Court decision.

ERIC LECOMPTE: Well, this is perhaps the most significant Supreme Court case that we’ve never heard of. In fact, for a legal presiding, a case that has been decided inside United States borders, this particular legal case will have one of the biggest and far-reaching impacts on extreme poverty around the world in our lifetimes.

In terms of the significance, you know, certainly, the situation dates back to Argentina’s default in 2001. And as you noted, the majority of folks who had debt, of companies, of firms, investors, restructured. But there was a small group of funds, popularly known as vulture funds, who swooped in, never invested in Argentina, but bought some of the debt for pennies on the dollar. Because the debt is contracted under New York state law, the vulture funds, for the last decade, have continued to litigate Argentina for payment in full, even when most—most creditors have restructured.

The significance of this case is so important that there is a rare global consensus where the United States government, the United Nations, the International Monetary Fund, the World Bank and religious anti-poverty groups, like us at Jubilee USA, are all on the same side of the table saying that this behavior is so extreme, it sets a precedent that essentially will be able to impact the poorest countries in the world, can keep them trapped in poverty. It’s a bad judgment for the broader investment community, for big businesses. It’s a bad judgment for debt restructuring around the world. And it even hurts us as U.S. taxpayers, because the very money that these vulture funds are collecting around the world from poor countries through litigation are moneys that are funded from debt relief efforts from our own tax dollars.

JUAN GONZÁLEZ: But yet, the amount involved here, compared to the original debt of Argentina, is a very—a relatively small amount. What power does the United States have to enforce this judgment by the Supreme Court against Argentina?

ERIC LECOMPTE: Well, enforcement is the question. The contract was signed in the United States, so a contract that’s governed under United States law, New York law, is supposed to be honored by both parties. But, however, there’s a question about what enforcement means. And again, this is where the White House, the Justice Department, the International Monetary Fund and Jubilee USA are all saying that what enforcement of that contract means is that these vulture funds should be paid out the same amount that all of the other restructured creditors were. So, we have to understand that right now, around all the financial jurisdictions of the world, the United Nations calls the state of New York the preferred jurisdiction for vulture funds, meaning that contracts are being moved to London, Paris and Frankfurt, where those countries have protections in place against this predatory, exploitative behavior.

AMY GOODMAN: Eric, the hedge fund, NML Capital, said in a statement, quote, “Now it is time for Argentina to honor its commitments to creditors, which would benefit both Argentina’s economy and its international standing.” Eric LeCompte of Jubilee USA, your response?

ERIC LECOMPTE: Well, ironically, Argentina has essentially been honoring its commitments to creditors. It essentially has settled with the Paris Club. It settled with more than 92 percent of the creditors. Where it hasn’t settled with is with these vulture funds that are trying to collect more than what they’re owed and trying to engage in what’s exploitative behavior. You know, what we see when we go back through the history of default is that these particular vulture funds continually attack poor countries and countries that are in financial distress. You know, right now what’s happening in this particular case is now these vulture funds have been equipped with an instrument that’s going to force poor countries, like the Ivory Coast and Zambia, into submission. So it’s a very powerful precedent that will be impacting the one-out-of-five people that live in extreme poverty around the world.

JUAN GONZÁLEZ: And, then again, when Argentina defaulted, it really set an example for the developing world, didn’t it, in terms of being able to confront these international creditors in times of financial crisis?

ERIC LECOMPTE: In many respects, it did. And certainly, the way that Argentina has been able to restructure its debts have led to a strengthening economy within Argentina. And the way that they’ve been able to confront this predatory behavior has essentially made Argentina a champion among the world’s poorest economies, as well as among the G-20.

AMY GOODMAN: Can you talk, Eric LeCompte, very quickly, in 30 seconds, about Paul Singer, who is the head of the parent company of NML?

ERIC LECOMPTE: So, essentially, he’s the person that’s developed this predatory behavior, that goes after assets in poor countries that essentially belong to vulnerable communities. He’s the person that leads several firms that are these predatory hedge funds which engage in this exploitative, extreme behavior. And he’s popularized, essentially, this kind of investor action around the world. And right now the World Bank notes that there are about a hundred companies that follow, essentially, the leadership that Paul Singer has laid out in terms of this behavior.

AMY GOODMAN: And his significance in national politics? Five seconds.

ERIC LECOMPTE: Yeah, he’s the number one donor to the GOP.

AMY GOODMAN: Eric LeCompte, we want to thank you very much for being with us, executive director of Jubilee USA Network.

And that does it for our show. Democracy Now! is hiring a seasoned Linux systems administrator. Visit democracynow.org/jobs for more information. 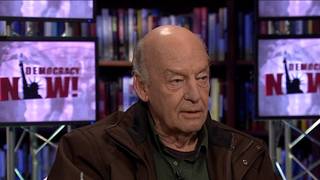