The pro-transparency group WikiLeaks has released the secret draft text for the Trade in Services Agreement, TISA, a trade agreement covering 50 countries and more than 68 percent of world trade in service. Until now, the draft has been classified to keep it clandestine, not only during the negotiations, but also for five years post-enactment. According to the leaked text, TISA aims to cement the extreme deregulatory model of the 1990s by forbidding countries from improving financial regulation. The draft Financial Services Annex would also establish rules favorable to the expansion of financial multinationals into other nations by preventing regulatory obstacles. The draft text comes from the April 2014 negotiation round. We discuss the leaked text with Lori Wallach, director of Public Citizen’s Global Trade Watch and author of “The Rise and Fall of Fast Track Trade Authority.”

JUAN GONZÁLEZ: On Thursday, WikiLeaks released the secret draft text for a trade deal called the Trade in Services Agreement. The deal covers 50 countries and over 68 percent of world trade in services. Until now, the draft has been classified to keep it secret, not only during the negotiations, but also for five years post-enactment. According to the leaked text, the trade deal aims to cement the deregulatory model of the 1990s by forbidding countries from improving financial regulation.

AMY GOODMAN: For more, we go to Denver, Colorado, where we’re joined by Lori Wallach, the director of Public Citizen’s Global Trade Watch and the author of The Rise and Fall of Fast Track Trade Authority.

Lori Wallach, welcome back to Democracy Now! Talk about the significance of this WikiLeaks leak around this trade agreement.

LORI WALLACH: Well, we’ve known these negotiations have been ongoing, but no one knew exactly what they were up to until this leaked. And effectively, the text, if it were enacted, would roll back a lot of the re-regulation that followed the global financial crisis and basically handcuff us into the 1990s extreme deregulation model that we all recognize was the cause of the crisis. And the perverse nature of it is, of course, because of the extreme secrecy, you have the Obama administration in public working to “re-regulate” the Dodd-Frank bill and its regulations, but then, behind closed doors in these negotiations in Geneva, sort of on the sidelines of the World Trade Organization, the U.S. and the European Union—the leaked text shows, because there are brackets that say who has what proposal—are pushing amongst the most retrograde anti-regulation provisions.

JUAN GONZÁLEZ: Well, Lori, the U.S. Chamber of Commerce said, quote, “the payoff from TISA [could] be huge” for domestic service industry firms and presents, quote, “a once-in-a-generation opportunity to tear down barriers to international trade.” The Chamber has also recommended that TISA “eliminate regulatory inconsistencies” and ensure that private companies are not put at a disadvantage when they compete with “state-owned enterprises.” Your response?

LORI WALLACH: What they want to tear down is the regulatory structure that was strengthened after the global financial crisis. So there’s a history to this agreement. At the World Trade Organization—everyone will remember the Doha round of negotiations. This is basically what happened after the big Seattle protest. There was going to be no WTO expansion, and then after 9/11, in Qatar, in Doha, there was a launch of something very similar to what all the countries rejected in Seattle. And that negotiation included major financial deregulation. And a lot of countries said no, and they said no to other parts of that Doha round. And as a result, and with a lot of citizen campaigning and protest around the world for over 10 years, the WTO expansion, the Doha round, never happened.

Well, there was a “coalition of the willing” countries. They were the neoliberals. And they decided, “Well, if we can’t get everyone to do it, why don’t we just see if we can go over here on the side and start this financial deregulation agreement, and then maybe later we’ll drag everyone else into it?” So this is a subset, this TISA. And basically, this is the Chamber’s agenda. This is tearing down all of these regulations. And they think, of course, it’s going to be very profitable for them to operate, basically ripping off all of us consumers.

But what this text shows is this is a proposal that only banksters can love. This is a proposal that’s going to mean grandma loses her house, you basically have huge debt, and Wall Street makes out like bandits again. It cannot go into effect. And now that we see it, actually, it’s going to have to be something everyone’s fighting against. And it also gives us the indication, probably, of what the U.S. is up to in the TPP, the Trans-Pacific Partnership, and also in the Trans-Atlantic Free Trade Agreement, TAFTA. So this agreement, if you will, is just the latest example of why there should never be fast track trade authority, because we now see what they do with it.

JUAN GONZÁLEZ: And what are some of the specifics that you find most objectionable?

LORI WALLACH: Well, the single most glaring and easy-to-understand piece of it, if you want to—if viewers want to take a look at it, is a provision that’s literally called “standstill.” And what it means is you have to have your regulations stand still as to where they were. And practically, it means—let’s say you want to ban a certain kind of derivative that gets created, and it’s a disaster—it causes speculation and instability. You’re forbidden from having new financial regulations. But the tricky part about this is, if you look at the way the different versions of that provision are written, it may require countries to stand still relative to where they were when the WTO services agreement was established in the 1990s, and that would mean all of these new regulations that were put into effect after the global financial crisis would automatically be violations. So the way the language is written, maybe it’s standstill from 1994. And if that’s the case, it would automatically reverse—would make trade violations out of—wouldn’t automatically reverse, would make trade violations out of all of these new re-regulations. Certainly it would not allow you to do anything new, going forward. But the way the different versions of the text are written, I think it refers back to the old commitments from the '90s, and that's where you’re frozen. That’s perhaps the most pernicious.

The second most dangerous thing is language that basically guarantees that there is freedom of movement in financial data. And the problem there is, of course, there are lots of consumer privacy protections where you’re not supposed to be able to have your confidential information. For instance, banks can’t send in one package your Social Security number, your name, your address and information about your bank account. And these rules about the movement of data, for countries, for instance, in Europe, where there are really strong consumer privacy rules, would be a rollback of those basic rights and a real risk for consumers.

AMY GOODMAN: And what about these issues of secrecy, Lori Wallach, that this trade agreement, TISA, the Trade in Services Agreement, was not supposed to be known about for five years after enactment?

LORI WALLACH: So, the headnote on the front page, which is what you’re referring to, what they’re saying there is, the actual agreement, once it was adopted, would become public, because, for instance, in the United States, it would become federal law. All of our domestic policies would have to be conformed to meet it. So, we would see the actual final agreement. What that headnote, the confidentiality agreement on the front page, is saying is we wouldn’t be able to see any of the documents for five years that went into the making of the agreement—so, anything about what positions different countries brought to the table, anything about what different countries thought different provisions meant as far as the interpretation of the agreement. I call that, really, the anti-accountability clause, because suddenly, full done, sprung upon us would be this deregulatory agreement, and then all the fingerprints would basically be covered up for five years, as well as, theoretically, what it means. And then the interpretation of what it means would be left to a WTO tribunal to tell us to gut our laws.

AMY GOODMAN: Lori Wallach, a final comment on the relationship between TISA and the Trans-Pacific Partnership, where they—where TPP stands today?

LORI WALLACH: So, basically, it gives you a hint of what’s going to be in those agreements and why we have to be against fast track.

That does it for the broadcast. Democracy Now! is hiring a seasoned Linux systems administrator. Visit democracynow.org/jobs for more information. 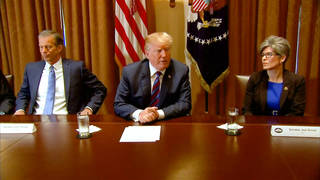