On Thursday, President Obama announced the deployment of up to 300 military advisers to Iraq and left open the possibility of U.S. airstrikes against the Sunni militants that have taken over large parts of the country. We go to Capitol Hill to speak with Democratic Rep. Colleen Hanabusa of Hawaii, who successfully introduced an amendment this week to prevent the deployment of U.S. troops to Iraq without congressional approval.

JUAN GONZÁLEZ: We turn now to Iraq. On Thursday, President Obama announced a plan to send up to 300 military advisers to support Iraqi forces confronting the Sunni militants who have seized a large swath of the country.

PRESIDENT BARACK OBAMA: The United States will continue to increase our support to Iraqi security forces. We’re prepared to create joint operation centers in Baghdad and northern Iraq to share intelligence and coordinate planning to confront the terrorist threat of ISIL. Through our new Counterterrorism Partnership Fund, we’re prepared to work with Congress to provide additional equipment. We have had advisers in Iraq through our embassy, and we’re prepared to send a small number of additional American military advisers, up to 300, to assess how we can best train, advise and support Iraqi security forces, going forward. American forces will not be returning to combat in Iraq, but we will help Iraqis as they take the fight to terrorists who threaten the Iraqi people, the region and American interests, as well.

AMY GOODMAN: For more on Iraq, we go to Capitol Hill, where we’re joined by Congressmember Colleen Hanabusa. She is a Democrat from Hawaii, member of the House Armed Services Committee, introduced an amendment this week that would prevent President Obama from deploying troops to Iraq without congressional approval.

Congressmember Hanabusa, welcome to Democracy Now! Can you explain exactly what your amendment says? And how would that apply to the announcement that President Obama has just made of sending at least 300 military advisers there?

REP. COLLEEN HANABUSA: Hi, good morning, and thank you for having me on Democracy Now!

The amendment passed last night by unanimous consent. In other words, there was no opposition. And I believe it is the only amendment in what is now the defense appropriation measures, which the House of Representatives will be voting on. What it says is, as you know, the president invoked the War Powers Resolution, which has in it certain conditions, so he has, for a period of time, the ability to do as he has done. The resolution does not, in any way, prevent him from sending troops in—troops or anyone in to help the—an embassy situation or our citizens in Iraq. That has no impact. And what he’s done up to now, by invoking it, he has the authority to do. However, what the resolution then requires is—and the amendment re-affirms—is that anything past that, the president must come to Congress in order to get further authorization. And this amendment says that he cannot use any funds. So no funds shall be used in a situation where the president has not complied with the War Powers Resolution.

JUAN GONZÁLEZ: Now, Congresswoman, you’ve been an opponent of the Iraq War for many years. Your concern, as you see the latest developments of the past few weeks, of what this might mean for United States involvement in Iraq?

REP. COLLEEN HANABUSA: You know, yes, you’re correct. I have opposed the Iraq War since the 2002 situation, and I’ve also opposed the president’s intervention into Syria, when he said he was going to do the limited airstrikes there. The problem that I think that we all have is why, the question of why. Why are we doing this? We do know. And the fact that I believe the president has invoked the War Powers Resolution, then simply doing the AUMF, the Authorized Use of Military Force, which is specific for Iraq and Afghanistan, that says to me that he realizes that it is delinked from 9/11.

So what we are doing now is we are intervening into a sectarian civil war. And the question, I believe, that most of us have is: Why and how does that link to national interest? And what is our national security interest in this? And in addition to that, will this be construed as taking a side in one of the three sectarian-related groups that there is in Iraq? And will that then exasperate the situation? And how are, then, we getting out of it?

But the real question that we’ve always had, from the time we intervened the first time into Iraq and went in under the guise of we knew that there were weapons of mass destruction, which then turned to be false, is: What is the endgame? What is it that we intend to achieve? What is it that we want? What is it? Or how do we leave a situation like that? But I think, more importantly, the American people want to know why. And this is where we are in Congress. That’s what people are asking: Why this sectarian civil war? Why are we going in?

AMY GOODMAN: You’re one of the few Buddhists in Congress. Your colleague, Senator Mazie Hirono, also a Buddhist from Hawaii, Hank Johnson of Georgia.

AMY GOODMAN: Does that play into your feelings in any way?

REP. COLLEEN HANABUSA: You know, I don’t believe that it necessarily plays into my feelings, per se, but, you know, I’ve always been—as being raised as a Buddhist, I’ve always felt that it’s really a philosophical way of looking at what goes on in our lives and how do we place that balance. So, in the sense that I’m always asking the questions of why and how does this affect the people, what are my constituents, and I guess, in that sense, yes, it really sensitizes me to the really major question of what is it—you know, we are talking about human lives. But I think that the bottom line in all of this, it isn’t necessarily religious-oriented. I think it really is a matter of just humanitarian concerns and people and the question of what is it that we, as Americans, intend to tell the world as we step in the middle of a sectarian civil war that we know has been going on for a while. So, what is it that triggers it this time?

JUAN GONZÁLEZ: Well, Congresswoman, I wanted to ask you: Some of your colleagues—I’m thinking specifically in the Senate, John McCain—have said that the mistake of the president was in removing so many troops from Iraq that he allowed this situation to develop, that they predicted; what’s your response to that?

REP. COLLEEN HANABUSA: I don’t believe that that’s a correct assessment. I think the problem was going into Iraq, to begin with. It wasn’t the removal of the troops, because the removal of the troops, remember, was a function of whether or not at that time Maliki was going to actually sign, and he made it very clear that the United States had to leave. And now we’re beginning to hear stories about whether Maliki was really under the control or influenced heavily by the supreme leader of Iran. So we have all of these different players now in the region influencing how this is going to come out. I think to say that it was because we removed the troops, that’s not the situation.

Look at—look at what happened. This—the ISIL, or ISIS, whichever way you want to refer to the group that’s coming in, Sunni-based, the question is where. Where is the money coming from? Where is the training coming from? Because they seem to be, by all reports, a very well-trained, well-financed group, and as that moves in. And look at the Kurds and what they’re doing. They’re not really in this, but of course they have their territories, as well. So the—I think to say it was taking the troops out, that’s not it. And I don’t think it was in the president’s—what he had control over, to take the troops out. That was a matter of what Iraq wanted, and they made it clear: We are to leave with no troops left behind.

AMY GOODMAN: Congressmember Colleen Hanabusa, we want to thank you for being with us, Democratic congresswoman from Hawaii, a member of the House Armed Services Committee, introduced the amendment this week that would prevent President Obama from deploying troops to Iraq without congressional approval. When we come back from break, we’ll talk about Nouri al-Maliki, the prime minister of Iraq, and who is being pushed to replace him. Stay with us. 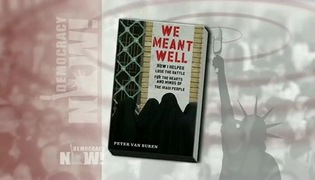