In a deal brokered by Qatar, the United States agreed to release five Taliban leaders from Guantánamo Bay in return for winning Bowe Bergdahl’s freedom. Bergdahl is now being treated at an American military hospital in Germany and will return to the United States at a later date. The Taliban leaders will be forced to remain in Qatar for one year. The deal has been controversial. Some of Bergdahl’s former soldiers say he should face a court-martial for desertion. Meanwhile, Republican lawmakers are accusing President Obama of failing to properly give Congress advance warning of the Guantánamo prisoner transfers, and of endangering U.S. troops worldwide by incentivizing their capture. We get reaction from retired Air Force Col. Morris Davis, who resigned as the former chief military prosecutor at Guantánamo Bay in 2007.

AARON MATÉ: I want to turn to Colonel Morris Davis in Washington, the retired Air Force colonel, former chief military prosecutor at Guantánamo Bay. Colonel Davis, I believe there are now 78 prisoners still at Guantánamo who have been cleared for release. Does this deal with the Taliban showcase any greater ability by President Obama to free Guantánamo, to empty it and carry out his promise to close the prison?

COL. MORRIS DAVIS: It does. You know, we’ve heard for the last several years, you know, that the pro-Obama group has said that he wanted to close Guantánamo, but Congress blocked him from doing it. I think what he did this past weekend shows that when he is determined to act, that he can act. And the five left Guantánamo. I know some in Congress are upset about it, but, you know, he’s the commander-in-chief. And during the Bush administration, Jay Bybee wrote a memo for Bush that said that anything Congress does that infringes on the president’s unfettered power as commander-in-chief is unconstitutional. So, I think the president this weekend used that power.

SEN. TED CRUZ: How many soldiers lost their lives to capture those five Taliban terrorists that we just released? You know, Ambassador Rice basically said to you, “Yes, U.S. policy has changed: Now we make deals with terrorists.” And the question going forward is: Have we just put a price on other U.S. soldiers? What does this tell terrorists?

AMY GOODMAN: And earlier today, President Obama talked about his decision to release the five Taliban commanders from Guantánamo in exchange for Bowe Bergdahl.

PRESIDENT BARACK OBAMA: In terms of potential threats, the release of the Taliban who were being held in Guantánamo was conditioned on the Qataris keeping eyes on them and creating a structure in which we can monitor their activities. We will be keeping eyes on them. Is there the possibility of some of them trying to return to activities that are detrimental to us? Absolutely. That’s been true of all the prisoners that were released from Guantánamo. There is a certain recidivism rate that takes place. I wouldn’t be doing it if I thought that it was contrary to American national security.

AMY GOODMAN: That was President Obama in Warsaw, Poland, today. Colonel Morris Davis, can you respond to both? And would you call these men who have been released and sent to Qatar prisoners of war, as well?

COL. MORRIS DAVIS: Yes. It was disappointing hearing—not just Senator Cruz, there have been many, John McCain and others, that have tried to use this as political capital to make President Obama look weak. And I think that’s a false narrative, and, unfortunately, too many of the public buy into it. You know, Senator Cruz said, “How many Americans died trying to capture these five Taliban figures?” As best I can tell, the answer to his question is none. There’s information available to the public about the five individuals and how they were captured. Two, I believe, surrendered to the Afghan government. There was one captured, I believe, in Pakistan. There’s no indication that any of these people—I think the picture that’s trying—that’s being painted is that in the midst of battle, that the U.S. forces captured these guys, and lives were lost in the process. And that’s simply not the case.

I think the president is right when he said you can’t guarantee there will be no recidivism. I mean, if we’re waiting for the risk to be reduced to zero before you release people from Guantánamo, then they’re going to be doing a life sentence, because we can never reduce the risk to zero. But you have to take some reasonable risk.

You know, as for talking to and negotiating with terrorists, I’m just not aware of any war ever that has ended where the parties to the war don’t have negotiations and discussion. I just don’t know how you end a war without talking to the other side.

And as for these five men, when I was chief prosecutor, we had screened all of the detainees, and we had focused on about 75 that had the potential to be charged with a crime. And when I saw the names the other day, I wasn’t familiar with any of these names. So we had more than 12 years. If we could have proven that they had done something wrong that we could prosecute them for, I’m confident we would have done it. And we didn’t.

AARON MATÉ: And, Colonel Davis, your response to this clip we heard from this Guardian video, where Bob Bergdahl compares the plight of his son to the Guantánamo prisoners?

COL. MORRIS DAVIS: I think it’s a fair comparison. I think what Bob was trying to say there is that his family could relate to the Guantánamo detainees and their families, because just like them—I mean, in Bob’s case, you know, Bowe was being held halfway around the world, not knowing whether he would ever be released or ever come home. And there is a lot of similarity between that and the families—I mean, I think we tend to forget that the 149 men at Guantánamo have families, too. And they sit back home, wherever they’re from, and wonder if their husband, father, son, will ever come home to them. So I think it is a fair comparison.

And I think that’s what Bob has tried to do throughout this, I think, is to relate to the people on the other side, to try to humanize Bowe’s plight and to try to be—you know, show his empathy with the other side. I know he’s been criticized a lot for some of the things he said, but it’s—you know, it’s easy to sit back and criticize the actions of Bob, but until you’re the parent and it’s your child that’s being held hostage, I think it’s a little hypocritical to be—to condemn what he’s done.

AMY GOODMAN: Well, I want to thank you both very much for being with us, Colonel Morris Davis, retired Air Force colonel, resigned as former chief military prosecutor at Guantánamo in 2007, and Sean Smith, joining us from London, award-winning photographer and filmmaker for The Guardian, met Bowe Bergdahl in Afghanistan in 2009 when he was embedded with his unit, and then went to meet Bob Bergdahl, Bowe’s father, in Idaho. And we played the video of that portrait that he did in Idaho.

This is Democracy Now!. When we come back, the Supreme Court has refused to hear the case of New York Times reporter James Risen. Will he have to go to jail? We’ll be back in a minute. 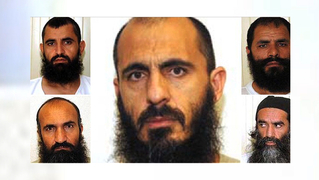