The backlash over the prisoner swap involving U.S. soldier Sgt. Bowe Bergdahl and five members of the Taliban continues to grow. In Bergdahl’s hometown of Hailey, Idaho, community members have a canceled a celebration of his release over public safety concerns. In recent days, angry phone calls and emails poured into Hailey City Hall and local organizations over the town’s support for the soldier. Bergdahl was captured by the Taliban in 2009 shortly after he left his military outpost in Afghanistan. Some of Bergdahl’s fellow soldiers have described him as a deserter. They have also said at least six soldiers died while searching for him, a claim the Pentagon rejects. We discuss the Bergdahl controversy and its local impact in Idaho with Larry Schoen, a county commissioner in Blaine County.

JUAN GONZÁLEZ: The backlash continues to grow over the prisoner swap involving U.S. soldier Sergeant Bowe Bergdahl and five members of the Taliban. In Bergdahl’s hometown of Hailey, Idaho, community members have canceled a celebration of his release over public safety concerns. In recent days, angry phone calls and emails poured into Hailey City Hall and local organizations over the town’s support for the soldier.

Bergdahl was captured by the Taliban in 2009 shortly after he left his military outpost in Afghanistan. He was held by the Taliban for five years. Some of Bergdahl’s fellow soldiers have described him as a deserter. They’ve also claimed that at least six soldiers died while searching for him. On Wednesday, Defense Secretary Chuck Hagel rejected that claim.

DEFENSE SECRETARY CHUCK HAGEL: On Sergeant Bergdahl, I do not know of specific circumstances or details of U.S. soldiers dying as a result of efforts to find and rescue Sergeant Bergdahl. I am not aware of those specific details or any facts regarding that issue.

JUAN GONZÁLEZ: On Capitol Hill, four top intelligence and military officials held an unusual closed-door briefing for the entire Senate on Wednesday to discuss why the White House decided to move ahead with the prisoner swap without notifying Congress. Senators were shown a recent video of Bowe Bergdahl depicting him in declining health. Meanwhile, Republican Senator Lindsey Graham of South Carolina warned that Republican lawmakers would call for Obama’s impeachment if he released any more prisoners from Guantánamo Bay without congressional approval.

AMY GOODMAN: In another development, The Wall Street Journal reports that during the prisoner exchange negotiations, the Taliban warned that U.S. drone strikes had come close on several occasions to killing Sergeant Bergdahl while he was in captivity.

To talk more about the story, we first go to Idaho, where we’re joined by Larry Schoen. He’s the county commissioner for Blaine County, Idaho. Hailey is one of the five cities in Blaine County.

Welcome to Democracy Now! Can you talk first about, first, Larry, the decision to cancel the celebrations upon the return of Bowe Bergdahl, though we don’t know when that will be?

LARRY SCHOEN: Well, first thing, good morning, and thank you for having me. And I speak very mindful of all those who have given so much in service of the best intentions of the mission in Afghanistan. I was not in on the decision making to cancel the event, but I think there were concerns about—that the event would become too large for local officials to manage. I think some people have felt the temperature rising here as disagreements about what may have happened have come to the fore on the national stage. And really, I think nobody here wants to channel some of the nastiness that is out there. People are rushing to judgment, and I think that’s inappropriate. And I think, in light of circumstances today, the decision was made to cancel the event, several weeks ahead of it, to tamp that down.

JUAN GONZÁLEZ: And, Larry Schoen, can you tell us something about your corner of the country, where Bowe Bergdahl grew up?

LARRY SCHOEN: Well, this is a beautiful part of the country. Idaho is a state with more wilderness than any state in the lower 48. People come here to recreate and be a part of the great outdoors. Our community is small. It’s about 22,000, but made up of people who have come to live here and visit here from all over the world. It’s the home to the Sun Valley resort, which was America’s first ski resort, founded back in the 1930s. And so, it’s a very close-knit community, a well-educated community. People support one another in tough times. And I think, you know, that’s—that was the nature of this event, is to show support for the Bergdahl family and Sergeant Bergdahl, who has been held by the Taliban for five years.

AMY GOODMAN: Larry Schoen, yours is an usual community in that you’ve got the great wealth of the celebrities, like Bruce Willis and Demi Moore, their home there, though they are divorced, but what they have there. And then you’ve got working-class people. You’ve got, for example, the Bergdahls, who moved from California, Calvinist, homeschooled their kids, both Bowe and his older sister, Sky. He worked at the Zaney’s coffee shop. Can you tell us a little about that as a community center? And actually was well known for his ballet performances, Bowe Bergdahl was.

LARRY SCHOEN: Right, well, you know, people focus on the celebrity aspects of this community, because people have been coming here from southern California since the '30s. In fact, that was part of the marketing of this resort when it first opened. But this is a working-class community. And Zaney's is a coffee shop owned by an old friend of mine, who opened it because that’s what she—she loves being with people. She loves serving people. It’s a place where Bowe worked, and therefore has become kind of the Mecca in town. You know, our county is bigger than the state of Delaware, with only 22,000 people. People tend to congregate in the towns, but the Bergdahls, like I, live out in the rural parts of the county. And, you know, that has been a gathering place. And I think that’s appropriate. I think people have tried to show their support over the course of these five years, needed a place to do that, and Zaney’s was a good place. You know, the job that he held there was one of the many things that this young man has done in his short life.

JUAN GONZÁLEZ: And how has the uproar in Washington and across the media, now nationwide, over whether Bowe Bergdahl was a deserter and should have been rescued—how has that affected the town and its support for the family?

LARRY SCHOEN: Well, I think it has—I think it’s shaking the town, because I think, first and foremost—and certainly I, as an elected official here, think—about the family and their son, our native son, and what they need to get through this ordeal, the whole five years of captivity and now this ordeal in the national press, the global press. So we’re thinking first about them. And this is—from our perspective, this is not, first and foremost, about national and military policy and U.S. foreign policy, but certainly, the issues surrounding his release, this is a very complex story. And there are ties to U.S. foreign policy coming out of this, you know, really hometown story about this young man. And so, I think people are shaken by that.

I think people are trying not to rush to judgment here locally. I think everybody knows what is right and what is wrong in many of the different actions that have occurred. So, we have many different components to the story. There is the question of what was his state of mind when he left his base and went missing? Was it appropriate for the U.S. government to release these five Taliban under these circumstances? And there are many different parts to that story. So, you know, we’re feeling the effects of the global story, but trying to focus, I think, on the health and welfare of the Bergdahl family.

AMY GOODMAN: And, Larry Schoen, you know Bowe’s parents, Bob and Jani Bergdahl. Can you tell us a little about them?

LARRY SCHOEN: They are wonderful people, a loving—it’s a loving family. They are loving people. I am sure they instilled in their son the best values that America has to offer. And, you know, I support them 100 percent through all of this.

LARRY SCHOEN: Yeah, I don’t really know how long he worked for UPS, but he’s well known in town. You know, he’s been criticized for having spoken local Afghanistan language, the Pashtun, and now he’s being criticized for a number of different things because people are just searching for things to criticize in this event. But really, Bob is a very thoughtful man. I think he—and he expressed publicly many times that his goals and intentions were to stand in solidarity with his son and to try as best as he could and as best as they could to appreciate and understand his circumstances and the circumstances of his comrades in Afghanistan. And I think the Bergdahls have acted with only the best intentions towards their son and this country.

AMY GOODMAN: Larry Schoen, we want to thank you for being with us, county commissioner for Blaine County, Idaho. Hailey is one of the five cities in Blaine County. The Bergdahls live just outside of Hailey, and Bowe grew up just outside Hailey and worked at this well-known watering hole, Zaney’s coffee shop, which is why he was very well known in the community.

This is Democracy Now! When we come back, we’re going to speak to a soldier who served years in the military. He was in Afghanistan at the same time as Bowe Bergdahl. And when he came back to the United States, he applied for conscientious objector status. Stay with us. 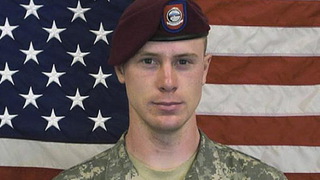