Almedalen Week: At Sweden’s One-of-a-Kind Festival, All Political Parties Gather in One Place

Democracy Now! is on the road in the Swedish city of Visby, on the island of Gotland in the Baltic Sea, during Almedalen Week — a week-long political festival perhaps unlike any other in the world. More than 25,000 people have gathered to hear political speeches and take part in seminars. Every Swedish political party is represented, from the Social Democrats to the Greens to the Feminist Initiative party, along with hundreds of other political organizations. We get an overview of the political situation in Sweden from Brian Palmer, a social anthropologist at Uppsala University. Palmer says progressive and Green candidates are expected to gain ground in Sweden’s election this September, and notes the country just became the first to send a militant feminist to the European Union. Sweden has a policy to grant asylum to anyone from Syria, and a recent study found attitudes toward immigrants are more positive in Sweden than in any other European country.

StoryAug 20, 2018In Memoriam: David McReynolds, the Gay Socialist Pacifist Who Twice Ran for President, Dies at 88

AMY GOODMAN: We are broadcasting from the Swedish city of Visby on the island of Gotland, located about 60 miles off the southeastern coast of Sweden in the Baltic Sea. We’re in the middle of an event called Almedalen Week. It’s a week-long political festival, perhaps unlike any other in the world. Over 25,000 people are gathering here on Sweden’s largest island to hear political speeches and take part in seminars. Every Swedish political party is represented here, from the Social Democrats to the Greens to the Feminist Initiative party. Hundreds of political organizations are also here for this huge open-air democracy festival.

Well, we begin today’s show looking at Sweden’s place in the world. We begin with Brian Palmer. He teaches at Uppsala University, Sweden’s oldest university, founded in 1477. He’s the co-author of a new book published here in Sweden titled 101 Historical Heroes.

Brian, we welcome you to Democracy Now!

BRIAN PALMER: You’re right that this is a truly unique festival. Twenty-eight thousand people from all parts of the political spectrum are here to debate the future of this society, to debate international questions. There’s no entrance fee. Anyone can show up. And it’s a festival that other countries are trying to copy in various ways, in Norway, in Denmark, even in South Korea.

AMY GOODMAN: We don’t have anything like it in the United States. We have conventions, you know, Democrat and Republican, maybe Green, but they’re usually warring with each other, though they agree on some fundamental issues.

BRIAN PALMER: Exactly. We don’t have gatherings that bring together people from left and right that are open to everyone in the way that this is.

AMY GOODMAN: The elections will be taking place in September. Can you talk about their significance? Are we going to see a change of party here? And for people outside Sweden who don’t know the political landscape?

AMY GOODMAN: There was a rally here against immigrants, for white supremacists. Explain.

BRIAN PALMER: With a very small number of participants, well, several hundred anti-racists protested. And one can say that Sweden, like every European country, has a right-wing populist party with an anti-immigrant focus, but that Sweden also has the strongest anti-racist movements in the world. A recent study in March by the European Commission found that attitudes toward immigrants were more positive in Sweden than in any other European country.

AMY GOODMAN: Sweden is allowing anyone from Syria to come here and get political asylum.

BRIAN PALMER: That’s right. It’s the only industrialized country to take that stance. Even Germany, which has been generous to Syrian immigrants, does not have such a broad welcome. And it was recently that Pope Francis spoke of Sweden’s policy and said that Sweden was doing what every nation in the world ought to be doing, opening its doors to people fleeing war and carnage.

AMY GOODMAN: Now, people talk about Sweden as a social democracy, but it’s also become a laboratory of privatization. Can you explain?

BRIAN PALMER: The current right-of-center government under Fredrik Reinfeldt has pushed privatization in areas like railroads, where competing train companies use the same tracks, making the Swedish word “train chaos” very significant in recent years, as there have been collisions, derailings, massive disruptions in the train system, partly due to that privatization. We’ve also had privatization of—private alternatives in schools that have led to situations where schools have closed in the middle of the school year because the risk capitalists who own them had pulled out their money. What we’re seeing, in other words, is a failed experiment in privatization, in many ways, that has become a central issue for the election in September.

BRIAN PALMER: Sixty percent of Swedes in polls say that they do not want Sweden to become a member of NATO. Nonetheless, the Swedish military does exercises together with NATO every year in the forests of northern Sweden. Sweden sends troops to NATO operations in Afghanistan and elsewhere. So we are a de facto member of [NATO] against the wishes of most of the population.

AMY GOODMAN: Finally, in your book, 101 [Historical] Heroes, you name some heroes here in Sweden. Can you tell a global audience who they are?

BRIAN PALMER: People like Dag Hammarskjöld, the United Nations secretary-general who dared to stand up to the United States, but also to the Chinese, to the Russians, who was killed in the conflict in the Congo; referencing the Swedish tradition of diplomacy and peacemaking that today makes Sweden the largest supplier of volunteers in the occupied territories of Palestine, where young people go to be nonviolent witnesses and thereby try to lessen the level of violence from Israeli soldiers.

AMY GOODMAN: Well, we’re going to leave it there for now. We have a lot of people to speak to. Thank you very much to our guest, Brian Palmer, social anthropologist. He teaches at Uppsala University in Sweden, author of a book on 101 people who have risked their lives for peace, justice and human rights, which has an English version forthcoming, formerly taught at Harvard University in Cambridge, Massachusetts. 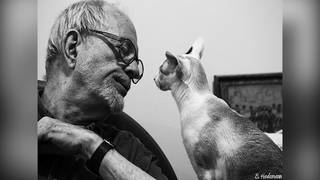 In Memoriam: David McReynolds, the Gay Socialist Pacifist Who Twice Ran for President, Dies at 88