At the week-long Almedalen political festival in Visby, Sweden, one of the major issues has been climate change and Sweden’s role in addressing the crisis. In May, the bishops of the Church of Sweden issued a joint statement calling climate change “the biggest common challenge ever faced by humanity.” Sweden’s new archbishop, Antje Jackelén, is among those calling for scientists, politicians, cultural icons and religious leaders to work in concert to address the issue. Jackelén issued the call after making history as Sweden’s first-ever female archbishop. “As a church, we are part of a global movement,” she says. “The question of justice is at the heart of the Christian Church.”

StoryJul 03, 2014As Neo-Nazis Rally, Sweden Poised for Election-Year Shift of Power Balance from Right to Left

AMY GOODMAN: We are broadcasting from Visby, Sweden. This is Democracy Now!, democracynow.org, The War and Peace Report. I’m Amy Goodman. The name Visby comes from the old Norse meaning “place of sacrifices.” We’re in the middle of an event called Almedalen Week, a week-long political festival perhaps [unlike] any other in the world.

One of the major issues at this year’s festival has been climate change and Sweden’s role in addressing the crisis. In May, the bishops of the Church of Sweden issued a joint statement, saying, quote, “Climate change is probably the biggest common challenge ever faced by humanity. But popular concern and the seriousness of the reports on climate are not matched by climate and environment being placed high on the political agenda.” Sweden’s new archbishop, Antje Jackelén, is among those calling for scientists, politicians, cultural icons and religious leaders to work in concert to address the issue.

Well, for more, we’re joined by Archbishop Antje Jackelén. She made history last month becoming Sweden’s first-ever female archbishop. About 71 percent of Sweden’s population of nine million belong to the Church of Sweden.

AMY GOODMAN: So, it’s taken a very long time to get a woman in your position as archbishop.

AMY GOODMAN: How many?

AMY GOODMAN: What do you think accounts for you being chosen?

ARCHBISHOP ANTJE JACKELÉN: Well, it’s actually a development. We got female priests in 1960 and female bishops in 1992. So, it’s accelerated towards the end.

AMY GOODMAN: And what does it mean to be a female archbishop? Do you feel a special responsibility?

ARCHBISHOP ANTJE JACKELÉN: Well, in a sense, yes. You know, it’s still working the way that women in leadership positions are expected to perform extremely well. But on the other hand, I feel a huge support, and there’s so much joy in Sweden, in the church and even outside the church, over this development.

AMY GOODMAN: Now, why have you made climate change your number one issue? You’re holding in your hand a bishop’s letter about the climate.

AMY GOODMAN: I’ll ask you—I was on Swedish radio this morning. They said to me, “Why do you think we in Sweden care about climate change? We might be least affected by it.” So why are you most concerned about it?

ARCHBISHOP ANTJE JACKELÉN: We are most concerned because, as the church, we are part of a global movement, and we have relationships with people of—Christian people and people of other faiths in other parts of the world who are already affected and ask the questions of justice. And the question of justice is at the heart of the Christian Church. So, it’s a question of climate justice, as well. That’s just one reason why we do this.

The other reason is that it is not just an issue you can solve with technology and science. We need that, of course. It’s not just an issue about economy, although we need a lot of development in the economy. But it is also an issue of what do we believe, what can we hope for, what is the role of the human being in the world. So it’s utterly an existential and religious question, and we should address it as people of faith. And we should ask the question: What really is realistic to hope for?

AMY GOODMAN: You know, I saw something amazing this morning. It was politicians here in Visby questioning heads of business about what kind of regulations they want to see around climate, around conservation. I mean, in the United States, the politicians—businesses pay to lobby politicians. Here, politicians were asking businesses how they want to be regulated.

ARCHBISHOP ANTJE JACKELÉN: Yeah, I mean, a lot of things have happened. And, of course, compared to the United States, Sweden has been ahead and trying to mobilize all the good forces in society to work for this purpose. But what we haven’t done is that we have taken into it the existential and religious questions and drawn from that capital, so to speak.

AMY GOODMAN: What is being done in Sweden? How are you addressing the issue of climate change?

ARCHBISHOP ANTJE JACKELÉN: Well, in this book, we are doing it in a way that we first ask the question: What do we really know? And what are we not really certain about? And how do we go about these uncertainties? And we also ask the question: What did get us into this? So, as a church, we have 2,000 years of history, which allow us to look at the big changes and say, “This is what has contributed to where we are today.” And if you know that, your history, then you can also move into the future. We also address the question of existential anxiety and how do you speak to young people and children about this when they are anxious about climate. We also say—

AMY GOODMAN: How do you?

ARCHBISHOP ANTJE JACKELÉN: Well, the first thing to do is actually talk about it. Talk about it. Children who get to talk about this with their parents and other adult persons actually fare better. They are better informed, and they have better measures to handle the anxiety and to mobilize, actually, hope, that allows action to happen.

And then we also address what does it mean for a person of faith to address these questions. And we end up with putting a number of challenges before ourselves, before the society at large, business life, corporate life, before the U.N. climate convention, before global church and religious leaders and so on.

ARCHBISHOP ANTJE JACKELÉN: Well, we are thinking about cutting the emissions, of course, and divestment from the fossil fuel industry, and encouraging alternative ways of handling energy, and again and again also addressing the questions of justice and also gender equality, because we know that women are often those who contribute the least of the emissions but often the one who have to carry the heaviest burdens.

AMY GOODMAN: I want to ask you on another issue, the issue of Islamophobia. You have been very outspoken against Islamophobia. You’re a fan of Twitter. And you’re also a target of those who want to—who express hate towards people of the Muslim faith.

ARCHBISHOP ANTJE JACKELÉN: Yes. Well, again, what we can do is try to be as clear as possible and try to give the complexity—I mean, what these people do, they have a black-and-white view of the world—and being very energetic and enthusiastic about saying, “No, there is so much complexity in this. And let us address the complexity of these issues and never compromise the issue of human dignity.”

AMY GOODMAN: Finally, what do you say to U.S. politicians? You know, there’s a major debate in the United States whether climate change is induced by human beings. Can you talk about how you address this issue?

ARCHBISHOP ANTJE JACKELÉN: Well, yes. What we see is things are happening. And we know—well, most people in the United States have insurance on their homes, don’t they? And the risk that your home is burning is actually not very high, and yet you get your insurance. So if you take the same measure of risk around the climate, it’s much higher, and still there are people saying, “Oh, I don’t care.” So that’s not very consistent behavior. So, if you’re the less cautious, so do get going on addressing these issues.

Yes, this is Democracy Now!, democracynow.org, The War and Peace Report. We are broadcasting from Almedalen. This is a major open-air democracy festival. In the United States, it would be all the conventions together. We’re going to take a break, and when we come back, we’ll be joined by a young man who has been arrested in Sweden a number of times protesting weapons manufacturers. It might surprise some to know that Sweden is one of the largest arms exporters in the world. We’ll also be speaking with the head of one of the oldest peace organizations in the world. Stay with us.

Despite Peaceful Reputation, Sweden is a Major Weapons Exporter to Human Rights Abusers 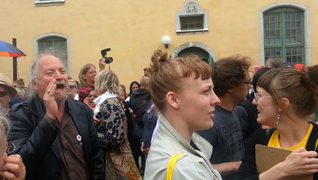 As Neo-Nazis Rally, Sweden Poised for Election-Year Shift of Power Balance from Right to Left