As Neo-Nazis Rally, Sweden Poised for Election-Year Shift of Power Balance from Right to Left

Sweden is in the middle of a “super election year” with elections taking place for the European Parliament, as well as local and national elections. After eight years of a right-wing government, our guest says the balance of power is set to shift to a red-green alliance between the country’s Left Party and Green Party. “There is a lot at stake for a lot of people,” says Andreas Gustavsson, editor-in-chief of the daily Swedish newspaper Dagens ETC. He discusses key issues in the election, and recent protests against the Party of the Swedes, a neo-Nazi party whose members oppose immigration and have joined in fighting alongside fascist groups in Ukraine.

StoryJul 02, 2014Swedish Lawmaker: “We Need to Solve Our Climate Problem in a Modern Way”

AMY GOODMAN: This is Democracy Now!, democracynow.org, The War and Peace Report. I’m Amy Goodman. We’re broadcasting from the Swedish city of Visby. It’s on Sweden’s largest island, Gotland. We’re in the middle of an event called Almedalen Week. It’s a week-long political festival where all of Sweden’s political parties gather. It’s almost as if, you know, the Democratic and Republican convention in the United States, they were all held together. Twenty-five thousand people have gathered here.

For those who are watching, you can see it is very windy. It is pouring rain. We’re hoping it won’t be a thunderstorm, but you’ll hear the rain hitting against the mic, if that’s the case.

And we’re joined right now by Andreas Gustavsson. He is the editor-in-chief of a new newspaper, daily newspaper in Stockholm, has come over to the island, as so many journalists have, to cover this unusual week, that has been going on since Olof Palme, the former Swedish prime minister who was assassinated in 1986, came here years before that and just started giving speeches. And so this convention, this festival continues.

ANDREAS GUSTAVSSON: Thank you. Thanks for having me.

AMY GOODMAN: Talk about the significance of this event and the journalists who come here, why you come.

ANDREAS GUSTAVSSON: [inaudible] quite a super election year. We have the Parliament, the EU Parliament. We have the national elections, as well, and local elections, all at once, all in the same year. And we’ve got eight years with a right-wing government. Sweden has totally changed during these eight years. So, there’s a lot at stake for a lot of people.

AMY GOODMAN: The name of your newspaper and what it means in English?

ANDREAS GUSTAVSSON: It’s calld Dagens ETC, which is basically The Daily Etc., the story that continues.

AMY GOODMAN: And so, talk about the critical issues that people are debating now. This, clearly a surge in the polls for what they’re calling the red-green alliance—who these parties are?

ANDREAS GUSTAVSSON: First, we’ve got the biggest party in Sweden, the Social Democrats. They are about 30 percent of the, yeah, electoral base. And then there’s the Left Party, which is currently almost outside of a future government. The Social Democrats are preferring the Green Party; they are having close discussions together. So, there will be a change of government in September. I’m fairly sure of that.

AMY GOODMAN: And what are the issues of the day that are most hotly debated?

AMY GOODMAN: Which is about how much in percentage?

AMY GOODMAN: And the Feminist Initiative is this new political party.

ANDREAS GUSTAVSSON: Yeah, yeah. It’s not new. It’s been around for a couple of years, but there’s been a backlash regarding feminists here in Sweden. But it’s back with a vengeance. So, they’ve got seats in the EU, the European Parliament, and I’m fairly sure they will get seats here in Parliament here in national Parliament after September.

AMY GOODMAN: Just as I was coming to this broadcast walking through the island, there was a mass protest of what are called here anti-racists.

AMY GOODMAN: Hundreds of them protesting the speaking of the Party of Swedes. Can you explain what this Swedish Party is?

ANDREAS GUSTAVSSON: The Swedish Party are not in Parliament, but it’s a Nazi party.

ANDREAS GUSTAVSSON: Yeah, it’s a Nazi party, no discussion about it. They want to throw out every migrants, immigrants from Sweden. And they don’t even believe in the democratic system, but they are taking part in the elections this autumn. And they are—there are the Swedish Democrats. They are already in Parliament. They are not Nazi, but they are racist. So, first we’ve got the Swedish Democrats, and now we’ve got this—I’m ashamed of them.

AMY GOODMAN: This Swedish Party, also allied with it, the Swedish Resistance Movement. Explain who they are.

ANDREAS GUSTAVSSON: Yeah, yeah. That’s the violent part of the Nazi movement here in Sweden. They have attacked several people just this year, almost killed one person in Malmö on the 8th of March. And now they are taking part in combat in Ukraine, with fascist groups in Ukraine.

AMY GOODMAN: Now, explain that. So, in Malmö, in one of the Swedish cities, on International Women’s Day, one of these Nazis knifed one of the anti-racists on the street.

AMY GOODMAN: He had just come from—the Nazi, from Ukraine, fighting on whose side?

ANDREAS GUSTAVSSON: In the coup in Ukraine, there was a fringe movement of fascists. We’ve got Svoboda—that’s one major party—and the even more extreme-right sector. And the Swedish fascists are involved with both Svoboda and the right sector.

AMY GOODMAN: So now he—was he arrested after he knifed this Swede?

ANDREAS GUSTAVSSON: Some of the Nazis were arrested, but one of them, he’s still at large.

AMY GOODMAN: And he went back to Ukraine?

AMY GOODMAN: So, the issues here around immigration, that ties into these far-right parties, do you see this as part of a European sort of resurgence of the right?

ANDREAS GUSTAVSSON: Yeah, yeah, we see it. And both the Swedish Democrats and the more extreme Party of Swedes have close connections to all these groups, from Le Pen’s party in France to other Nazis in Greece. They are closely knit together. And there’s a brown fascist surge in Europe right now.

AMY GOODMAN: I want to thank you very much for being with us, editor of—why don’t you pronounce it yourself—of the new newspaper. In English, it’s Etc., E-T-C.

AMY GOODMAN: Thank you so much for being here. 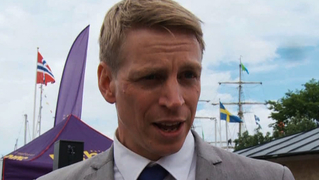 Swedish Lawmaker: “We Need to Solve Our Climate Problem in a Modern Way”