Just hours after the White House condemned the shelling of a U.N. school in Gaza, the Pentagon confirmed it was providing Israel with fresh supplies of ammunition, including mortar rounds for tanks and ammunition for grenade launchers. Meanwhile, members of Congress are working to supply hundreds of millions of dollars in additional funding for Israel’s “Iron Dome” missile shield. While U.S. news anchors, pundits and politicians have repeatedly extolled the efficacy of the Iron Dome in deflecting rocket attacks, the acclaimed physicist Theodore Postol says there is no evidence Iron Dome is actually working. He estimates the Iron Dome, which is partially built by Raytheon, intercepts just 5 percent of rockets fired at Israel. A professor of science, technology and national security policy at the Massachusetts Institute of Technology, Postol is an expert in missiles, missile defenses and other aspects of modern warfare.

AMY GOODMAN: This is Democracy Now!, democracynow.org, The War and Peace Report. I’m Amy Goodman. Just hours after it condemned the shelling of a U.N. school in Gaza, the United States confirmed it was providing Israel with fresh supplies of ammunition, including mortar rounds for tanks and ammunition for grenade launchers. Meanwhile, U.S. Congress is working to supply hundreds of millions of dollars in additional funding for Israel’s Iron Dome missile shield. On Monday, U.S. National Security Adviser Susan Rice reaffirmed the Obama administration’s support of Iron Dome at an event organized by the Conference of Presidents of Major American Jewish Organizations.

SUSAN RICE: In recent weeks, on average, over 100 rockets a day have been fired at Israel. Iron Dome has literally meant the difference between life and death, and I’m deeply proud that President Obama helped make it possible. And I’m proud that with his enthusiastic support, the United States will more than double our investment in Iron Dome in 2015.

AMY GOODMAN: In the U.S. media, news anchors, pundits, politicians have extolled the efficacy of the Iron Dome in deflecting the barrage of Hamas rockets that put Israeli lives at risk.

REPORTER: Red flash as it intercepts the rocket. Now this defense system is proving hugely successful.

SEN. TED CRUZ: Rockets begin coming through the sky, the night sky. And you see rockets come across the sky, and then you see Iron Dome interceptors come up and explode the rockets.

MARTIN FLETCHER: The Iron Dome anti-missile system did its job tracking the missiles, hitting them head-on, destroying them.

DAVID LEE MILLER: As we gazed overhead, we saw the interceptor missiles, the Iron Dome system, doing its job, at least three of those rockets shot down just a few moments ago.

AMY GOODMAN: Well, our next guest says exactly the opposite, suggesting the Iron Dome is more of, quote, an “Iron Sieve.” He has just written an article in the Bulletin of the Atomic Scientists called “The Evidence That Shows Iron Dome Is Not Working.” Physicist Theodore Postol joins us now from Boston, Massachusetts. He’s professor of science, technology and national security policy at the Massachusetts Institute of Technology, an expert in missiles, missile defenses and other aspects of modern warfare.

Professor Postol, welcome to Democracy Now! I mean, over 1,300 Palestinians have been killed. Three Israeli civilians have died, it’s believed two of them as a result of rocket or mortar. Yet you’re saying Iron Dome is not responsible for the low casualty rate for Israelis. Why?

THEODORE POSTOL: Well, the low casualty rates are due to an extremely effective system of early warning and sheltering. There are shelters all over Israel that have been built by the government. People have shelters in their homes, by law. And there is a warning system that tells you that a rocket might be traveling in your direction. So, all you need to do is get into the shelter, or into a shelter, and even if the rocket hits your house, you will not be killed. Now, if you don’t get into a shelter and a rocket hits your house and, for example, enters the room where you were sitting, you will be killed. So, the sheltering and warning is very critical to saving lives.

So, the reasons that this civil defense is so effective is because, first, the artillery rocket warheads are not very large, 10 to 20 pounds, and the second thing is that people have adequate warning to take shelter. That is extremely effective. Let me just give you an example of how dramatically effective early warning can be. In World War II, during the bombing of London, there were V-1 and V-2 rockets being used. The V-2 was a ballistic missile that hit without warning, because people had no radars at that time to know it was coming. The V-1 was kind of like a cruise missile. It was called a buzz bomb, because it had a particular kind of a what’s called pulse jet motor that made a buzzing sound. Now, the V-1s did the same amount of damage as the V-2s, but the chances of being killed by a V-1 when it hit the ground, relative to a V-2, were 60 percent lower, 60 percent lower. And this great reduction in casualties is ascribable to the fact that if you’re walking in the street during World War II in London and you hear the buzz bomb overhead, its motor will turn off and it will dive to the ground, but you have seven seconds between the motor turning off and the warhead hitting. And just getting to the ground increases your chances of survival by a factor of 60 percent. So—

AMY GOODMAN: So what is the so-called—this dome, the Iron Dome, doing?

AMY GOODMAN: So how often have these rockets been intercepted?

THEODORE POSTOL: Well, we don’t know exactly, but my guess is maybe 5 percent of the time. It may not even be that good.

AMY GOODMAN: Ninety-five percent of the time, they miss?

AMY GOODMAN: I mean, if you’re watching television in the United States, as we just played those clips, it’s universally accepted that it is the reason for the low casualty rate for Israelis.

THEODORE POSTOL: Well, let me remind you that in the Gulf War of 1991, the interceptor rate of the Patriot missile defense over Israel and Saudi Arabia was reported as 96 percent, even higher. And we analyzed the information we obtained from television videos, and when we were finished, the general view among all—all—informed technical people was that the intercept rate of Patriot was probably zero. So, people look at these explosions in the sky, they associate this light show with successful intercepts, and what they are seeing are the explosion of the Iron Dome warheads.

AMY GOODMAN: —to accelerate production of the Dome missile defense components. What is the company that benefits from this, or the military contractors that are getting this money?

AMY GOODMAN: So, that’s where the money goes.

THEODORE POSTOL: Well, a large part of it will go. I haven’t been able to find any information on how much will be paid to Raytheon for each interceptor that’s built.

AMY GOODMAN: Do you think the money is well spent, Professor Postol?

THEODORE POSTOL: I would not spend money on an interceptor that has a near-zero chance of intercepting an artillery rocket. The interceptor probably costs well in excess of $100,000 per interceptor, and it’s maybe achieving a 5 percent rate—maybe, could be lower—against rockets that maybe cost $1,000 each or $500 each. So the cost-exchange ratio is fine, if you’re Israeli and the dollars on not coming out of your pocket. But in the case of an American system, I would certainly not support such a system.

AMY GOODMAN: How can there be such a disparity between what you claim and everyone else? I mean, the Israeli government says 85 to 90 percent success rate. Is it lying?

THEODORE POSTOL: Well, I think there’s been quite a lot of sleight of hand on the part of the Israeli government. Now, in all fairness, there are reasons—I mean, that could be justified in warfare—for lying. First of all, you could lie because it calms your population to think that they’re being defended. Now, there is a double-edged sword here, though, because if people think they are being defended, they may not take shelter. And in November of 2012, three people were killed—

THEODORE POSTOL: Oh, three people were killed on a porch because they were out looking at Iron Dome supposedly successfully intercepting.

AMY GOODMAN: We’re going to continue this conversation after the show, and then we’ll post it at democracynow.org. Professor Theodore Postol of Massachusetts Institute of Technology, thanks so much for joining us. 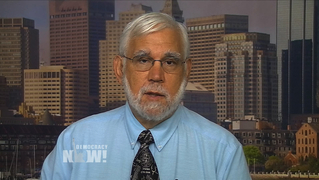