More than 2,500 people filled the sanctuary of Friendly Temple Missionary Baptist Church in St. Louis for Michael Brown’s funeral. Another 2,000 packed into overflow rooms. Speakers included Rev. Al Sharpton, attorney Benjamin Crump and Brown’s cousin, Ty Pruitt. “America is going to have to come to terms with, there’s something wrong that we have money to give military equipment to police forces, but we don’t have money for training and money for public education and money to train our children,” Sharpton said.

AMY GOODMAN: “He Saw the Best in Me,” one of the songs from Michael Brown’s funeral held Monday in St. Louis, Missouri. This is Democracy Now!, democracynow.org, The War and Peace Report. I’m Amy Goodman in New York. Aaron Maté is in St. Louis, as we turn now to Michael Brown’s funeral held Monday in St. Louis, Missouri. Twenty-five hundred people filled the sanctuary of the Friendly Temple Missionary Baptist Church to say goodbye. Another 2,000 filled overflow rooms. Michael Brown’s black-and-gold casket was topped with red roses, similar to the hundreds of roses laid in the street since he was killed, along with the red Cardinals baseball cap he wore as he was shot. Large photographs of Brown as a young boy and teenager stood on either side.

His parents were joined by hundreds of extended family members but did not speak. Michael Brown Sr.'s tribute in the funeral program read, quote, “I think of you day and night and just wish I was there to save you from harm. I always told you I would never let anything happen to you. And that's why it hurts sooooo much. I will never let you die in my heart,” he wrote. Michael Brown’s mother Lesley McSpadden’s tribute read, quote, “I want you to know you were the purpose in my life. Out of everything I did, it was you that I did right,” she wrote.

BENJAMIN CRUMP: It was 162 years ago, about 10 miles, Pastor Jones, from this great building where we say our final respects to young Michael Brown Jr. Maxine Waters, they say that it’s still referred to as the old courthouse where the Missouri Supreme Court issued the Dred Scott decision, Reverend Jackson. And the substance, Reverend Al, of that decision was that a person of African descent could not, nor were they ever to be considered a citizen pursuant to the United States Constitution. Now, one could logically conclude, Bishop Jakes, that this follows the precedents set by the 1787 three-fifths amendment that said an African American was to be considered three-fifths of a man. But we declare here today, as we pay our final respects to Michael Brown Jr., that he was not three-fifths of a citizen. He was an American citizen. And we will not accept three-fifths justice. We will demand equal justice for Michael Brown Jr.! So with that legal reference, I bring to you one of the most influential civil rights leaders of our history, Reverend Al Sharpton.

REV. AL SHARPTON: This is about justice. This is about fairness. And America is going to have to come to terms with, there’s something wrong that we have money to give military equipment to police forces, but we don’t have money for training and money for public education and money to train our children. America, how do you think we look when the world can see you can’t come up with a police report, but you can find a video? How do you think we look when young people marched nonviolently asking for the land of the free and the home of the brave to hear their cry, and you put snipers on the roof and pointed guns at them? How do we look? How do we look when people that support the officer—and they have a right to do that and an obligation, if they feel that—but if they support him, they’re supporters, but if we come to support the family, we’re dividing the country? What does God require of us?

In three weeks, we saw Marlene Pinnock, a woman in Los Angeles, laid out on the freeway, Congresswoman Maxine Waters. A California Highway Patrolman hit her 15 times on video, with no weapon in her hand, nothing, no threat to her. Right after that, a man, they say that he had loosie cigarettes, and they put an illegal chokehold on him. Man videoed it. Eleven times, he said, “I couldn’t breathe.” And the man, the policeman, wouldn’t let him go. Later that week, we see Michael laying on the ground. America, it’s time to deal with policing! We are not the haters; we’re the healers!

What does it require of us? We can’t have a fit. We’ve got to have a movement. A fit, you get mad and run out for a couple of nights. A movement means we’ve got to be here for the long haul and turn our chance into change, our demonstration into legislation. We have got to stay on this so we can stop this!

AMY GOODMAN: The Reverend Al Sharpton speaking Monday in St. Louis, Missouri, at the funeral for Michael Brown. Among the guests who attended the service were a number of congressmembers, Martin Luther King III, Reverend Jesse Jackson, the families of Trayvon Martin and Sean Bell, and celebrities like Spike Lee, Diddy and Snoop Dogg. We go back to Democracy Now!'s Aaron Maté in St. Louis, who was there as Michael Brown's casket was brought outside the church.

AARON MATÉ: It’s just after the funeral service, and we’re waiting for the coffin of Mike Brown to be taken to the hearse right in front of us. The Reverend Al Sharpton just wrapped up the service and now has led a group of dignitaries to just outside. Michael Brown Sr. leaving the service, being greeted by the crowds that have assembled here outside of the church.

MOURNER 1: Everything said about him was wonderful. He said he was going to be a legacy, and he is. He did it. He didn’t know how, but he did it.

AARON MATÉ: What comes next, after he’s laid to rest today?

MOURNER 1: What comes next is we stand together as a unit, in unity. Stop, stop, please, the violence. Let’s stand up and do it the right way, the way Martin Luther King taught us to do it. And that’s what we need to do.

MOURNER 2: Mobley. The service was wonderful. I thought Reverend Sharpton did a terrific job in outlining the agenda and so forth, because it’s a shame that here in America people that’s supposed to protect you are shooting you down. This is just another Emmett Till situation that happened in the 1950s. In fact, it’s worse, though, because it’s done by the policeman. And that’s ridiculous. That’s all I got to say.

AARON MATÉ: In the scorching 100-degree heat, as we leave the church watching this motorcade bring Michael Brown to his final resting place, people are out in the streets, raising their arms and repeating that rallying cry that has defined this movement since the killing of Michael Brown: “Hands up! Don’t shoot!” Residents of this neighborhood right by the church have come out of their homes to send off the motorcade that will take Michael Brown to his final resting place.

MAYA JONES: Maya Jones. And I was just really touched. And it hits home, because I just sent my son away to school. It just really hits home, because I have an 18-year-old. So, to not be able to see your child go away, it really hits home. So I really feel for that family. I live right here, and this is—this is just an emotional breakdown. I’ve never seen anything like it. I didn’t grow up in the civil rights time, but I can definitely imagine walking in their shoes, fighting for a cause.

This is Democracy Now!, democracynow.org, The War and Peace Report. When we come back, Libya. Stay with us. 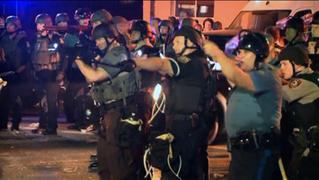