This week Burger King announced it is buying the Canadian coffee-and-donut chain Tim Hortons for $11.4 billion, creating the third-largest fast-food chain in the world. The newly created firm will be headquartered in Canada where the corporate tax rate is lower than in the United States. While Burger King denies it was motivated by lower taxes, the deal has revived the debate over so-called tax inversions, whereby U.S. companies use mergers to move overseas and avoid U.S. tax rates. In July, the Obama administration estimated tax inversions could cost the United States as much as $17 billion per year. One investor who stands to profit from the Burger King deal is President Obama supporter Warren Buffett. He lent Burger King $3 billion at a lucrative 9 percent interest rate to help complete the deal. We are joined by James Henry, an economist, lawyer, and senior adviser with the Tax Justice Network. He is former chief economist at McKinsey & Company.

JUAN GONZÁLEZ: This week Burger King announced it is buying the Canadian coffee-and-donut chain Tim Hortons for $11.4 billion, creating the third-largest fast-food chain in the world. The newly created firm will be headquartered, however, in Canada, where the corporate tax rate is lower than in the United States. While Burger King denies it was motivated by lower taxes, the deal has revived the debate over so-called tax inversions, whereby U.S. companies use mergers to move overseas and avoid U.S. tax rates. In July, the Obama administration estimated tax inversions could cost the United States as much as $17 billion per year. One investor who stands to profit from the Burger King deal is Obama supporter Warren Buffett. He lent Burger King $3 billion at a lucrative 9 percent rate to help complete the deal.

AMY GOODMAN: To discuss this deal and what it could mean, we’re joined by James Henry, an economist, lawyer, senior adviser with the Tax Justice Network, former chief economist at McKinsey & Company. And joining us via Democracy Now! video stream from Portland, Oregon, is Tim Dickinson—covers the national affairs beat for Rolling Stone, where he’s contributing editor, has just published a new piece headlined “The Biggest Tax Scam Ever: Some of America’s top corporations are parking profits overseas and ducking hundreds of billions in taxes. And how’s Congress responding? It’s rewarding them for ripping us off.”

Well, we’re going to go first right here in New York to James Henry. Explain what inversion is and what exactly Burger King is doing with Tim Hortons.

JAMES HENRY: Well, there are lots of kinds of inversions, but in this case we have, basically, a U.S. company that’s paying—you know, with about 7,000 locations here—paying a higher corporate tax rate than it would if it were a Canadian company. And simply by switching the corporate headquarters to Canada, they can realize that gain. The company is denying that that’s the motivation. But, in fact, because Canada has a territorial corporate income tax, they wouldn’t be receiving any income on the more than 6,000 locations that are outside of the United States. And so, it basically amounts to a way of immediately cutting Burger King’s taxes that are paid to the IRS.

JUAN GONZÁLEZ: Now, this has been a growing trend now in recent years in the United States. Could you talk about some of the other major companies that have done the same thing? And what is—clearly, it’s legal, but the Obama administration has been on a warpath on this issue.

JAMES HENRY: Well, there’s been a dramatic increase in the interest in this activity. If you go back to 1983 to 2004, there were about 27 corporate inversions. In the next decade, in the last decade, there’s been about 50. And just this year, there’s at least 50 that are under consideration. We have companies mainly in the pharmaceutical industry, like Medtronic, AbbVie, that are looking at offshoring their ownership to countries in places like Ireland, that has a 12 percent tax rate. So, this isn’t beginning with Burger King. This is quite a flurry of activity.

And, you know, there is legislation in Congress that could try to constrain this, introduced by Senator Levin and by his brother in the Congress, simply by qualifying the—restricting the amount of ownership that a U.S. company has to have, but that hasn’t really gotten a lot of support among the Democrats. Democrats are kind of divided on this issue. This really has to be seen as part of a more general phenomenon, though. I think the right is now working on an agenda to basically repeal the corporate income tax. And so, where there’s a flurry of activity around inversions, but just this summer we’ve seen at least two editorials in The New York Times talking about “Why not repeal it? It’s just so complicated.” So, inversions are kind of the tip of that problem.

AMY GOODMAN: Burger King has defended its plans to buy Tim Hortons and move to Canada. The executive chairman, Alex Behring, said on Tuesday, quote, “This is not a tax-driven deal. It is fundamentally about growth and creating value through accelerated expansion.” The company’s chief executive, Daniel Schwartz, added, quote, “We don’t expect there to be meaningful tax savings or any meaningful changes in our tax rate.” Is that true, James Henry?

JAMES HENRY: Well, you know, this operates—I mean, I think this is not true. It’s a whopper. The fact is, the Canadian tax rate officially is 27 percent, which is not much lower than ours, but, in fact, effective tax rate in Canada is about 20 percent or lower. And because of the fact that they have a territorial tax, any U.S. profits that were received from those 6,000 restaurants offshore would not be taxed by Canada. So Canada is not getting any incremental revenue from it, and all that revenue is just being lost to the U.S. Treasury. The other thing that we’ve seen in the other 70 inversions to date is that companies have loaded up on foreign debt. So they typically will—a foreign new owner of a U.S. company will make the U.S. company borrow and then pay interest to the parent in a low-tax jurisdiction. So that’s been a big pattern with inversions. I would expect to see that here.

JUAN GONZÁLEZ: Speaking about the financing of this particular deal, it turns out Warren Buffett is one of the main bankrollers of this deal. Now, he’s a friend and supporter of President Obama, extolled by him repeatedly as an ethical businessman. And yet, here he is, after constantly criticizing his fellow billionaires for not willing to pay enough taxes, suddenly bankrolling this inversion.

JAMES HENRY: Well, he claims that there’s substance to the deal and he’s not doing it for tax purposes. But, you know, when you really think about it, I mean, this is not the first time Tim Hortons has been acquired by a U.S. company. It was owned by Wendy’s from 1995 to 2006. Canadians are very upset to see this happen again, because when Wendy’s bought Tim Hortons, they added no value at all. It was a disaster, and they finally had to spin it off.

The real player behind the scenes here is a Brazilian billionaire that no one has even heard of in the United States, Jorge Paulo Lemann. He actually lives in Switzerland. But he and Buffett have gotten together on this deal. They now also own Heinz; they took them private. They own Anheuser-Busch. And so, they’re kind of on a path here to privatize and to, you know, reduce the taxes paid by major U.S. companies that we all know and love. So, you know, I’d like to ask Warren Buffett how he feels about the tax value here and exactly where he thinks Burger King’s going to add real value. 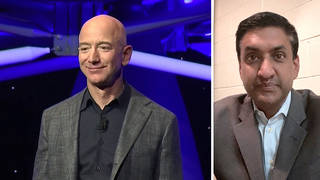