AMY GOODMAN: Juan, before we move on with our first segment, you have a very interesting column in the New York Daily News today.

JUAN GONZÁLEZ: Yes, well, I reported today on the—what is about to happen in New York City, one of the biggest and most ambitious experiments in reforming public education in years in the United States. Starting next week, New York will be offering free full-day prekindergarten classes to children in New York City. Until now, there’s only been a small, mostly half-day pre-K program. But the signature initiative of the new de Blasio administration is this universal pre-K. Effectively, it adds an entire year to the school year of any child in the public schools, because they’ll start school at four instead of five in kindergarten.

Thousands of teachers have been hired and trained. Hundreds of sites in both community organizations and public schools have been identified. And they’ve had to rush this all out only since March, which is when the Legislature, the state Legislature, approved funding for the program, after de Blasio lobbied fiercely for it. And so, it’s a major, major change, not to mention the fact that countless numbers of parents, who until now have had to pay for child care for their four-year-olds, will now not have to worry about this extreme, this large cost in their budgets of private childcare. So, it’s a major change. And if it succeeds, you may see cities across the country moving toward universal pre-K, full-day pre-K. So it’s going to be an interesting experiment. There are bound to be all kinds of problems initially with it, but I know that educators and reformers around the country are looking to see what happens with this pre-K program. 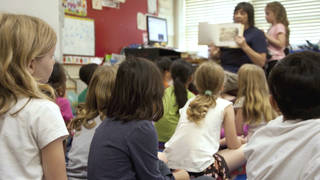