A Climate Week to Change Everything The climate crisis is worsening faster than predicted, by every scientific measure, and is paralleled by another crisis: the failure of the U.N. climate negotiation process. “You have been negotiating all my life,” student activist Anjali Appadurai said as she addressed the formal climate negotiations in Durban, South Africa, back in 2011. The climate negotiations have been in a virtual gridlock, with nations, most notably the United States under President Obama, blocking progress and protecting their national interests while the planet heats up, potentially irreversibly.

“I speak for more than half the world’s population. We are the silent majority,” Appadurai said as the designated youth speaker. “You’ve given us a seat in this hall, but our interests are not on the table. What does it take to get a stake in this game? Lobbyists? Corporate influence? Money?”

Three years later, the United Nations is now holding a special climate summit in New York City on Sept. 23, with more than 100 world leaders expected. Unlike the formal U.N. climate negotiations, the goal of this non-binding summit, the U.N. says, is “to raise political will and mobilize action, thereby generating momentum toward a successful outcome of the negotiations.” After 20 years, U.N. officials have apparently realized that, if left to the usual suspects of government and industry participants, the efforts to achieve a legally binding climate accord, slated for Paris in December 2015, will fail. Grassroots action is now seen as a critical component for success.

Environmental activists protested in outrage at the climate summit in Copenhagen in 2009, when President Obama showed up and derailed the U.N. negotiations by holding closed-door meetings with the world’s largest polluting nations. Back then, the United Nations responded by ejecting the activists. The U.N. climate negotiations are held around the world, but always in tightly secured convention facilities, far from people most directly impacted by climate change, and far from the sight and sound of climate activists who converge at the summits, hoping to pressure the negotiators to reach a deal before it is too late.

Just days before Ban Ki-moon’s invite-only summit next week, a broad coalition will hold the People’s Climate March, expected to be the largest march addressing climate change in history. People from all walks of life will gather on Central Park’s west side on Sunday, Sept. 21. Organizers expect over 100,000 people. More than 1,200 marching bands have been confirmed.

People will march in “blocs.” At the front of the march, “Frontlines of Crisis, Forefront of Change” will include indigenous and other communities directly affected by fossil-fuel extraction and the impacts of climate change. Organized labor and students will march under the banner “We Can Build the Future,” followed by “We Have Solutions” — alternative energy and sustainable food and water groups. The “We Know Who Is Responsible” bloc will highlight fossil-fuel corporations, banks and other polluters. Scientists and interfaith activists will comprise “The Debate Is Over” bloc, followed by the final, all-inclusive bloc, “To Change Everything, We Need Everyone.”

One of the principal organizers of the People’s Climate March is Bill McKibben, founder of 350.org, the climate-change organization named after 350 parts per million, the concentration of carbon dioxide in the atmosphere that scientists consider to be safe and sustainable. Says McKibben, “The only way we’ll change … is by building a big movement. That’s why September 21st in New York, which all these groups are coordinating, is such an important day.”

During the weekend, Union Theological Seminary is hosting a conference of clergy from around the world, addressing the moral issues raised by human-induced global warming. On Monday, the day after the big march, some independent groups are planning to “Flood Wall Street.” “Flood, blockade, sit-in, and shut down the institutions that are profiting from the climate crisis,” the group’s website implores, with a check box to indicate if you are willing to risk arrest. A group calling itself the “Earth Quaker Action Team” will theatrically investigate New York City branches of PNC Bank for the crime of “climate disruption,” for the bank’s role in financing mountaintop-removal coal mining.

Sunday’s climate march won’t include speeches. It’s all about the movement. But on Monday, author Naomi Klein will be among those speaking at the Wall Street actions. Her new book is out this week, titled “This Changes Everything: Capitalism vs. The Climate.” It is a powerful, passionate, paradigm-shattering call to action. In it, she reminds us, “climate change changes everything. And for a very brief time, the nature of that change is still up to us.”

Listen to Amy Goodman’s podcast of this column on SoundCloud. 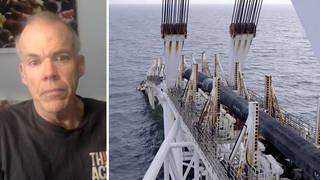