A New York Times exposé reveals more than a dozen prominent Washington research groups have received tens of millions of dollars from foreign governments in recent years while pushing United States government officials. Some scholars funded by the think tanks say they faced pressure to reach conclusions friendly to the government financing their work. The groups named in the report include the Brookings Institution, the Center for Strategic and International Studies, and the Atlantic Council, and most of the money comes from countries in Europe, the Middle East and Asia, including the oil-producing nations of the United Arab Emirates, Qatar and Norway. Few of them have registered with the Justice Department as “foreign agents” that aim to shape policy, as required by the Foreign Agents Registration Act. We are joined by Brooke Williams, a contributing reporter at The New York Times who co-wrote the new article, “Foreign Powers Buy Influence at Think Tanks.”

AMY GOODMAN: We turn now to a New York Times exposé which finds some of the most influential think tanks in the United States are awash in funds from foreign governments. According to the investigation published over the weekend, quote, “More than a dozen prominent Washington research groups have received tens of millions of dollars from foreign governments in recent years while pushing United States government officials to adopt policies that often reflect the donors’ priorities.”

The story is headlined “Foreign Powers Buy Influence at Think Tanks.” It reveals most of the money comes from countries in Europe, the Middle East and Asia, including the oil-producing nations of the United Arab Emirates, Qatar and Norway. Some scholars funded by the think tanks say they faced pressure to reach conclusions friendly to the government financing the research. Among the organizations named in the report are the Brookings Institution, the Center for Strategic and International Studies, the Atlantic Council.

For more, we’re joined by one of the article’s authors, Brooke Williams, contributing reporter at The New York Times who co-wrote the piece. She’s also an investigative journalism fellow at the Edmond J. Safra Center for Ethics at Harvard University.

Brooke Williams, welcome to Democracy Now! Talk about what you found.

BROOKE WILLIAMS: Thank you for having me. Well, we found tens of millions of dollars, as much as $92 million—and that’s a bare minimum—from foreign governments and foreign-controlled entities to think tanks, mostly in Washington, D.C. We also found a window into—to examine how the think tanks are interacting with the governments. And this is something that we’ve done for the first time. Think tanks have always—some of them have always published lists of donors. However, we could never tell what the foreign governments were paying for exactly, and usually not how much money they provided. We used public records from one of the governments and provided a window into how the think tanks were interacting. And what we found were some agreements in which the foreign government, Norway, in particular, was explicitly asking a think tank to approach—

AMY GOODMAN: The think tank being?

BROOKE WILLIAMS: The Center for Global Development—and to approach U.S. policymakers with a specific objective that was in the government’s interest. And we found that donors—

AMY GOODMAN: What were they asking for?

BROOKE WILLIAMS: They were asking for—to double spending in a foreign aid program. And a portion—a progress report that they sent to the Norwegian government said, “Target [group]: U.S. policy makers,” and then listed the policymakers that they would be targeting.

AMY GOODMAN: And the foreign aid money would go to where?

AMY GOODMAN: And talk about other examples that you found.

BROOKE WILLIAMS: We found letters, for instance, from think tanks such as the Atlantic Council, and they’re on the document viewer that’s on—readers can see on the website, in which—

AMY GOODMAN: You built the database?

BROOKE WILLIAMS: I built the database. And so, yes. And this is the first of its kind, in which we can really track how much money. I mean, it’s coming from all over the world, but, as you mentioned, certain areas are more heavily involved. But we found letters, for instance, from the Atlantic Council to a Norwegian energy minister, inviting them to attend an event and saying to the state-owned oil company, “If you attend, you know, this will really benefit your interests.” We found in one case a Brookings scholar saying that he would help to bring along a State Department official to a meeting, and Norway is a major donor to Brookings.

AMY GOODMAN: Let me get—bring in Brookings’ response, who we called. This is a message published by Strobe Talbott, president of the Brookings Institution, in response to the New York Times article on foreign powers buying influence at think tanks. Talbott writes, quote, “By disregarding important facts and taking information out of context, the reporters drew inaccurate conclusions that misrepresent the work of Brookings and ignore the institutional safeguards we have in place to ensure complete independence for our scholars’ research and policy recommendations.” Your response to that, Brooke Williams?

BROOKE WILLIAMS: Brookings does have institutional safeguards, and we examined them, and we included them in the article. I think it’s important to remember, however, that even with explicit rules, there can be implicit understandings. And as you can see in the article, we spoke with scholars who said donations from foreign governments led to implicit agreements, and that they would refrain from criticizing the donor governments. So even with explicit agreements, there can be implicit agreements and pressure to self-censor.

AMY GOODMAN: You talked about the Atlantic Council, and you feature a photograph, in addition to in the text, of Michele Dunne, who resigned as head of the Atlantic Council’s center for the Middle East after calling for a suspension a military aid to Egypt in 2013. Explain what happened and what this has to do with your central point in this article.

BROOKE WILLIAMS: Well, it comes back to the idea that scholars rely on funding from donors. And, you know, Brookings, for instance, said their senior scholars, they have an understanding and agreement that senior scholars, even if a donor pulls funding, will not lose their jobs because of that. Right? And so, this goes back to safeguards in place at institutions. And in that case, the Atlantic Council declined to comment much on what happened there, but I think it comes back to the idea of feeling pressure to self-censor and what might happen if a scholar were to criticize a donor government.

AMY GOODMAN: Talk about the laws in the United States, not just the rules of these different organizations, around the issue of registering as a lobbyist.

BROOKE WILLIAMS: Right, yeah. So the law pertaining to foreign government interests is much more strict than the Lobbying Disclosure Act, which, you know, we know, companies register to lobby. So, it requires foreign government interests who are attempting to influence public opinion or policy to register as foreign agents under the Foreign Agents Registration Act. And those filings are extremely detailed. They contain the dates and contacts of reporters, think tank officials, you name it. They listed the dates of contact, the purpose, whether it was by phone or in-person meeting. And it goes back to World War II, in an effort for the U.S. government to distinguish between Nazi Germany propaganda and research. And so, this—

AMY GOODMAN: Do you think these think tanks should have to register as foreign agents?

BROOKE WILLIAMS: Well, what I can say is that we spoke with attorneys who specialize in this area and examined, several times, the documents that we obtained, the agreements between the think tanks and the foreign governments. And the language in the documents, in these agreements, those attorneys felt, was strong enough—they leaned back in their chairs and said, “Wow! You know, this is explicit.” Some of the documents explicitly showed how the government was asking the think tank to influence public policy and, in some cases, opinion.

AMY GOODMAN: You have a piece under the sub-headline “Parallels With Lobbying.” “The line between scholarly research and lobbying can sometimes be hard to discern.

“Last year, Japan began an effort to persuade American officials to accelerate negotiations over a free-trade agreement known as the Trans-Pacific Partnership, one of Japan’s top priorities. The country already had lobbyists on retainer, from the Washington firm of Akin Gump, but decided to embark on a broader campaign.

“Akin Gump lobbyists approached several influential members of Congress and their staffs … [I]n October 2013, the lawmakers established just such a group, the Friends of the Trans-Pacific Partnership,” in October of 2013. Talk about what happened from there.

BROOKE WILLIAMS: So, they established this group, and there’s an organization called the Japan External Trade Organization. And we found, in filings with the Department of Justice, that they had been paying the Center for Strategic and International Studies, as well as other think tanks, for research and consulting. And then we also documented that the product of these seminars and groups that they held was to promote the Trans-Pacific Partnership. Now, a member, a scholar there, ended up testifying before Congress, promoting the Trans-Pacific Partnership. And what this comes down to is: Do lawmakers know? When someone from a research organization approaches them with a policy recommendation, do they know that a foreign government has funded that organization or, in some cases, even the policy paper itself?

AMY GOODMAN: And explain the Center for Strategic and International Studies’ relationship with this.

BROOKE WILLIAMS: Well, the Center for Strategic and International Studies has a seminar. It’s called the JETRO-CSIS seminar. And annually, they bring together lawmakers, specifically lawmakers who are in charge of U.S. trade policy, and Japan officials who are in charge of Japan’s trade policy, together, funded by the Japanese government and this Japan trade organization, to discuss U.S. policies in trade. And those policies are very important to Japan. So, attorneys who looked at these documents, you know, that area was more grey than perhaps the Center for Global Development and Brookings, but it still produced questions. You know, was this lobbying? Bringing together—it was providing access, at the very least.

AMY GOODMAN: Did you find violations of U.S. law?

BROOKE WILLIAMS: The attorneys we spoke with thought that the documents they reviewed, that I requested and obtained from Norway, the attorneys we interviewed believed that they—that two of the think tanks have.

AMY GOODMAN: Can you name those two think tanks?

BROOKE WILLIAMS: Brookings and the Center for Global Development.

AMY GOODMAN: And so, where would that lead?

BROOKE WILLIAMS: Well, it’s hard to say. The Department of Justice is in charge of the Foreign Agent Registration Act and in charge of enforcing it. And we’ll have to see what happens from here.

AMY GOODMAN: Well, we’ll leave it at that. I want to thank you very much for being with us.

This is Democracy Now!, democracynow.org, The War and Peace Report. Thirteen years old and working in the tobacco plantations in North Carolina and other states, stay with us. 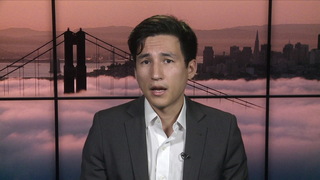