Watch Part 2 of our conversation with Rigoberta Menchú following Monday’s sentencing of former Guatemalan police chief Pedro García Arredondo. He was sentenced to 90 years in prison for ordering an attack on 37 peasant activists and student organizers who were occupying the Spanish Embassy in Guatemala City to protest government repression. One of the victims of the Spanish Embassy massacre was Don Vicente Menchú, Rigoberta’s father. For years, Rigoberta has fought for justice. She was awarded the Nobel Peace Prize in 1992.

AMY GOODMAN: This is Democracy Now!, democracynow.org, The War and Peace Report. I’m Amy Goodman, with Aaron Maté. We’re continuing to talk about the former Guatemalan dictator, Efraín Ríos Montt, who is now being tried for a second time on charges of genocide and crimes against humanity in the killings of more than 1,700 Ixil Mayan people in the early '80s. He was the president, the dictator, from 1982 to ’83. At a trial in 2013, he was sentenced to 80 years, but the ruling was overturned less than two weeks later. Guatemala's highest court dismissed all the case’s proceedings in order to retrial on technical grounds, but human rights activists say the court caved to political pressure from Guatemala’s ruling elite. Since then, 88-year-old Ríos Montt has been under house arrest and earlier this month failed to attend a court hearing. It’s currently unclear when his retrial will resume.

We’re continuing our conversation with Nobel Peace Prize-winning laureate Rigoberta Menchú at her offices in Guatemala City, largely responsible for making sure Ríos Montt was brought to justice. She began the process more than a decade ago with legal cases filed against Guatemalan generals for atrocities in the Mayan region. And here in New York, filmmaker Pam Yates joins us, her most recent documentary, Granito: How to Nail a Dictator, about building the genocide case against General Efraín Ríos Montt.

So, we wanted to go back to Rigoberta Menchú, the Nobel Peace Prize winner. In the first part of this discussion, we talked about what happened in this trial and the trial of the police chief who was responsible for the massacre at the Spanish Embassy that killed Rigoberta’s father and 36 others. But we ended that conversation talking about larger responsibility, particularly at the level of the Guatemalan government and the U.S. government that backed it. Rigoberta Menchú, if you could continue with what you were saying?

RIGOBERTA MENCHÚ: [translated] For years, the relevant documentation was hidden or erased and kept from public view. That documentation and those extensive dossiers are now before the courts and have been presented to the courts. A part of the massacre at the Spanish Embassy has been documented that six different police units participated and basically created a siege around the embassy so that nobody could leave the embassy alive. And similarly, in the course of the internal armed conflict, entire villages were wiped out, with the same intention that nobody would survive to tell the story.

AARON MATÉ: Can you talk about your father and the work he was doing organizing peasants in the face of very harsh repression?

RIGOBERTA MENCHÚ: [translated] My father was a natural-born leader. Since 1952, he organized and led peasants to struggle for land. He has really an amazing trajectory as a peasant leader. He helped to improve our seeds, to organize cooperatives, to improve the agricultural techniques that we used for planting. He did amazing things. He played a very important role in the history of the struggle of peasant farmers in Guatemala.

AMY GOODMAN: What was the weapon you said was used that helped destroy the Spanish Embassy, that led to the death of your father and so many others?

RIGOBERTA MENCHÚ: [translated] Yes, it has been presented and proved in court that there were two sources of fire in the Spanish Embassy. The first was started with an explosion and was where kerosene was probably used. The second source of incineration seems to be something that is quite unusual and extraordinary, given the speed at which it incinerated 37 people who were in the embassy at the time. The evidence points to this not being a regular burn time for a fire. The incineration burned the internal organs of the victims, their lungs and their kidneys. So it was not just a regular kind of fire. So, an apparatus has been photographed that was some kind of fire launcher that sprayed the bodies of the victims. The Spanish government has been documenting this and identifying the arm in question that was used.

AMY GOODMAN: Where do they believe it was from?

RIGOBERTA MENCHÚ: [translated] I believe that the investigation determined that it was an Israeli-made weapon. It was carried by a person who had a direct and intimate relationship with Pedro García Arredondo. Pedro García Arredondo was giving orders at the time on the use of this weapon.

AMY GOODMAN: And he was the police chief who was found guilty and sentenced to 90 years in this trial.

RIGOBERTA MENCHÚ: [translated] During the trial, a witness A, who is a witness whose name is protected, testified to the effect that this weapon was used and that it was manufactured in Israel.

AARON MATÉ: And, Pamela Yates, the significance of this revelation from the trial that an Israeli weapon was used in the Spanish Embassy fire, pointing to potential Israeli complicity?

PAMELA YATES: Doesn’t surprise me at all, because when the United States cut off military aid to Guatemala, they got their closest allies to step in: the Argentines and the Israelis. And thus we see a lot of Argentine and a lot of Israeli participation in the war, in the dirty war in Guatemala.

AMY GOODMAN: I want to go back to the trial of former Guatemalan dictator Efraín Ríos Montt. He’s being tried for a second time on charges of genocide and crimes against humanity in the killings of more than 1,700 Ixil Mayan people in the early 1980s. This is a clip of Judge Yassmin Barrios during the first genocide trial. This is from Pamela Yates’s web series, Dictator in the Dock.

JUDGE YASSMIN BARRIOS: [translated] In the Ixil area, in the villages and hamlets of Santa Maria Nebaj, San Juan Cotzal and San Gaspar Chajul, there were violent deaths of human beings, rapes and the razing of villages, which forced the Maya Ixil to flee in order to save their lives. We judges make the following analysis: With regard to the crime of genocide, the expert report from Dr. Elizabeth Ann Oglesby, who explained that the objective was to eliminate the civil population because it was considered that the Ixil people were the base of the guerrilla support.

AMY GOODMAN: That was Judge Barrios. Now, this is very interesting, Pam Yates. At this trial, you had the attorney general, Claudia Paz y Paz Bailey, and you had the judge, Judge Barrios—both are women. Talk about the significance of what the judge said. And then, what happened at the end of this trial?

PAMELA YATES: What was incredible was the sentencing of Ríos Montt. The sentencing is the day when you actually read the verdict and then decree the sentence. And she gave the whole narrative of what had happened in the trial, which is actually the story of what had happened in Guatemala. And at the end of it all, she said, “We can never let this happen again. And the reason that we have these courts of justice is to put it all out on the table, strengthen our democracy and move forward. But he is guilty.” So, the significance is just astounding. It means that a perpetrator of genocide against indigenous people—first time ever in the world and the Americas—is found guilty of that genocide. This is huge.

You know, many of the genocides in the Americas happened a really long time ago. This one happened 30-odd years ago. So, that it can be brought to trial and that the victims and survivors never gave up on the quest for justice over 30 years also points to the resilience of the Guatemalan people. But it also means that they have to spend a lot of time and energy in these courts, that are not really geared to giving real justice. Let’s see what happens with the Pedro García Arredondo case and how that verdict holds. But at least we were able to have our day in court, to have the story told and to have the verdict read.

AMY GOODMAN: Rigoberta Menchú, we must end. Do you feel there is hope for your country of Guatemala now?

RIGOBERTA MENCHÚ: [translated] Yes, I do think that there’s hope for Guatemala. But this hope has a very high price. It’s a hope that is built by people who take tremendous risks. Many of the witnesses still don’t want to talk. Many of the victims don’t want to testify, and they’re afraid. And they’re afraid because they’re criminalized. The victims themselves are criminalized. They’re stigmatized. They suffer social rejection. There’s smear campaigns against us. We’re called liars and leftists and communists. And these words, these accusations, hit us emotionally. They hurt. And also, many of the victims are tired. They’re ill. Many of them are elders. So, justice is prevailing, but at a tremendous cost. And this justice continues to be painful. So, yes, this is a sign of hope for Guatemala, and it’s also a sign of hope for the world.

AMY GOODMAN: Well, I want to thank you both for being with us. Rigoberta Menchú, the 1992 Nobel Peace Prize winner, her father, Don Vicente Menchú, was killed in the 1980 Spanish Embassy massacre in which 37 Guatemalan peasants, activists were killed. She has published many books. Her autobiography is I, Rigoberta Menchú: An Indian Woman in Guatemala. And thank you very much, Pamela Yates—

AMY GOODMAN: —filmmaker who in 1983 did the film, When the Mountains Tremble. She also did the film Granito: How to Nail a Dictator, about building the genocide case against General Efraín Ríos Montt. And the clip we chose was from Dictator in the Dock, which is a web series?

AMY GOODMAN: And we will link to it at democracynow.org. I’m Amy Goodman, with Aaron Maté. Special thanks to Cassandra Smithies. 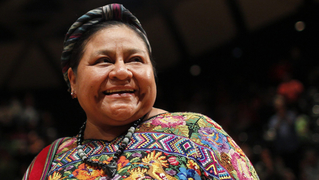