A journalist and activist accused of working with Anonymous has been given a five-year prison term and ordered to pay nearly $900,000 in restitution and fines. Barrett Brown was sentenced on Thursday after pleading guilty last year to charges of transmitting threats, accessory to a cyber-attack, and obstruction of justice. Supporters say Brown has been unfairly targeted for investigating the highly secretive world of private intelligence and military contractors. After his sentencing on Thursday, Brown released a satirical statement that read in part: “Good news! — The U.S. government decided today that because I did such a good job investigating the cyber-industrial complex, they’re now going to send me to investigate the prison-industrial complex.” We discuss Brown’s case with Kevin Gallagher, a writer, activist and systems administrator who heads the Free Barrett Brown support network. He says that the public should not believe what the government says about Brown.

JUAN GONZÁLEZ: A journalist accused of working with the hacking group Anonymous has been sentenced to five years in prison and ordered to pay nearly $900,000 in restitution and fines. Barrett Brown, held in custody since September 2012, pleaded guilty to charges of transmitting threats, accessory to a cyber-attack, and obstruction of justice, for interfering with the execution of a search warrant. After his sentencing on Thursday, Brown released a satirical statement, saying, quote, “Good news!—The U.S. government decided today that because I did such a good job investigating the cyber-industrial complex, they’re now going to send me to investigate the prison-industrial complex.”

AMY GOODMAN: Before Barrett Brown’s path crossed with the FBI, he frequently contributed to Vanity Fair, The Huffington Post, The Guardian and other news outlets. In 2009, Barrett Brown created Project PM, which was, quote, “dedicated to investigating private government contractors working in the secretive fields of cybersecurity, intelligence and surveillance.” He was particularly interested in the documents leaked by WikiLeaks and Anonymous. In the documentary We are Legion, Barrett Brown explains the importance of information obtained by hackers.

JUAN GONZÁLEZ: In 2011, the group Anonymous hacked into the computer system of the private security firm HBGary Federal and disclosed thousands of internal emails. Barrett Brown has not been accused of being involved in the hack itself, but he did read and analyze the documents, eventually crowd-sourcing the effort through the Project PM. One of the first things he discovered was a plan to tarnish the reputations of WikiLeaks and sympathetic journalist Glenn Greenwald, then with The Guardian. Brown similarly analyzed and wrote about the millions of internal company emails from Stratfor Global Intelligence that were leaked on Christmas Eve 2011. Shortly thereafter, the FBI acquired a warrant for his laptop and the authority to seize any information from his communications—or, in journalism parlance, his sources. In September 2012, armed agents barged into Brown’s apartment in Dallas, Texas, handcuffed him face down on the floor. He has been in prison ever since.

AMY GOODMAN: For more on the sentencing of Barrett Brown, we go to Dallas, Texas, to speak with Kevin Gallagher, the director of the Free Barrett Brown support network. He attended Brown’s sentencing hearing on Thursday. Kevin Gallagher is a writer, activist, systems administrator currently working for Freedom of the Press Foundation. He recently wrote a piece for the New York Observer called “Don’t Believe What the Government Says About Barrett Brown.”

Kevin Gallagher, welcome to Democracy Now! Talk about who Barrett Brown is, the sentencing yesterday, and what it means for freedom of the press. And talk about just what he did.

KEVIN GALLAGHER: Certainly. Well, thank you for having me on, Amy. So, as you provided in that very good background there, Barrett Brown is a journalist activist who became known through his work with Anonymous. And he landed on the radar of the FBI through his investigations of the private intelligence contracting industry. His case has gone on for over two years now, and his sentencing was delayed several times. Finally, yesterday, in the second half of the sentencing hearing, the judge imposed a sentence.

It was really quite extraordinary, because the judge essentially agreed with the government on most of the sentencing enhancements which they had proposed, overruling the defense’s objections. He did not seem to understand what the public impact of this case would be. He dismissed out of hand the mitigating factors of Brown’s mental state when he made the videos. In fact, he was more concerned about the chilling effects on FBI agents in conducting their investigations than any chilling effects on journalists who paste links. I think anybody, any journalist in the United States, should be concerned about the precedent that this sets for people who share information, people who report on hacking, or those who use hackers as sources or who do computer security research and things of that nature. But even just anyone who shares a link without knowing what exactly is in it, they’ve set an unreasonable expectation here that you should know that—for certain, that the link you’re sharing doesn’t contain stolen credit cards or things of that nature before doing so.

JUAN GONZÁLEZ: And what is the importance of the information that he provided about Stratfor? Who is Stratfor Intelligence, and its role?

KEVIN GALLAGHER: Well, yeah, Stratfor is a private intelligence firm. They’re much like a private version of the CIA. They have global—they do global analysis and generate reports, which people subscribe to and receive these reports. As a result of the emails that were leaked to WikiLeaks, several things came out of there. They were conducting surveillance of Occupy Wall Street, going after activists in Bhopal, India, and even targeting PETA at the behest of Coca-Cola. Brown actually did most of his work on the HBGary emails and looking at things like persona management and the Team Themis scandal, which you mentioned, more than he had a chance really to look into Stratfor.

AMY GOODMAN: I wanted to go to that issue of HBGary. By analyzing the information from the HBGary hack, Barrett Brown discovered the security firm’s plan to undermine journalist Glenn Greenwald’s defense of WikiLeaks. One slide read, “Without the support of people like Glenn wikileaks would fold.” HBGary intended to spread disinformation to discredit both Glenn Greenwald and WikiLeaks. In the documentary We are Legion, the director spoke to former HBGary CEO Aaron Barr about these plans.

BRIAN KNAPPENBERGER: It seems like you’re trying to attack a journalist here.

AARON BARR: Yeah, and I—you know, I don’t want to talk too much more about Glenn Greenwald, but other than, you know, what I previously said. You know, there was never an intent to attack journalists, not on my part. You know, I guess I should say—I should generalize that and to say that, you know, I would never just outwardly attack a journalist, other than if I felt that there was a journalist, in my mind, that was acting unethically, that, you know, that is a—that’s a fair game for having a public discussion about.

AMY GOODMAN: That’s former HBGary CEO Aaron Barr in the documentary We are Legion. Of course, Glenn Greenwald would go on to win the Pulitzer Prize. Kevin Gallagher, the significance of what Barrett Brown did in relation to HBGary? And as we wrap up, what the sentencing says to people in this country?

KEVIN GALLAGHER: Well, it says that they should be very concerned about the state of press freedom in this country. The U.S. has dropped in their ranking on press freedom as told by Reporters Without Borders—in fact, due to this case specifically. As far as HBGary, one of the biggest things that Brown found in there was a program called Romas/COIN, which was this mobile phone application proposal to target the Arab world. And, you know, to me, this is on par with any report that you’ve seen from the Snowden documents, and this was discovered two years before Snowden even came forward.

AMY GOODMAN: And that sentencing, he will spend how long in jail?

KEVIN GALLAGHER: Well, he’s been sentenced to 63 months, which is the maximum under the guidelines which the judge calculated according to the offense levels. But he could be out within one or two years if he completes an in-prison drug rehab program. And, you know, the bottom line is, this is not going to deter him from doing his work, which is writing, making people laugh through his hilarious column, and investigating government wrongdoing.

This is Democracy Now! When we come back, a major decision from the Supreme Court this week on whistleblowers. Stay with us.

In Victory for Gov’t Whistleblowers, Supreme Court Sides with Fired TSA Air Marshal Who Spoke Out 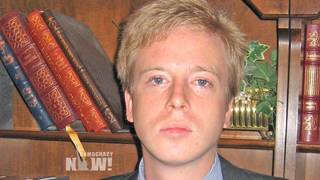