“Where Does This End?”: After Drone Papers Leaks, U.K. Gov’t Has a Kill List of Its Own

Last week, The Intercept published the most in-depth look at the U.S. drone assassination program to date. “The Drone Papers” exposed the inner workings of how the drone war is waged, from how targets are identified to who decides to kill. They reveal a number of flaws, including that strikes have resulted in large part from electronic communications data, or “signals intelligence,” that officials acknowledge is unreliable. We are joined by Clive Stafford Smith, founder and director of the international legal charity Reprieve, who says the British government also has a secret kill list in Afghanistan.

AMY GOODMAN: Last week, The Intercept published this in-depth look at the U.S. drone assassination program, called “The Drone Papers,” exposing the inner workings of how the drone war is waged, from how targets are identified to who decides to kill. They reveal a number of flaws, including that strikes have resulted in large part from electronic communications data, or “signals intelligence,” that officials acknowledge is unreliable. We spoke to Jeremy Scahill, co-founder of The Intercept, one of the lead reporters on the series.

JEREMY SCAHILL: One of the most significant findings of this—and my colleague, Cora Currier, really dug deep into this—is we published for the first time the kill chain, what the bureaucracy of assassination looks like. And what you see is that all of these officials, including people like the treasury secretary, are part of signing off on all of this, where they have these secret meetings and they discuss who’s going to live and die around the world. And at the end of that process, it is the president of the United States who signs what amounts to a death warrant for whoever they’ve decided should die.

AMY GOODMAN: The kill list is what Jeremy Scahill is talking about. Clive Stafford Smith, as we wrap up, your response?

CLIVE STAFFORD SMITH: Well, it’s something that just horrifies me, that, you know, I voted for President Obama, twice, and yet every Tuesday they have “Terror Tuesday,” where there’s a PowerPoint display in the White House, and they decide, much like Nero did back in the Colosseum in Rome, whether to give the thumbs-up or the thumbs-down for human beings who we’re just going to murder around the world. And, you know, it begins with terrorism, but it will move on. The British, horrifyingly, have already got a list of people on their list in Afghanistan, where they’re saying they’re going to kill pedophiles, for goodness’ sake. I mean, where does this end, that we just murder people worldwide? I mean, we plan to do a lot to publicize that in the upcoming months.

NERMEEN SHAIKH: When did you learn that Britain has a kill list, to begin with?

CLIVE STAFFORD SMITH: It was only a couple of weeks ago. Frankly, I’m very pleased, because when both the Brits and the Americans are doing it, we can illustrate the folly of both instead of just picking on the U.S.

AMY GOODMAN: Clive Stafford Smith, I want to thank you very much for being with us. Clive Stafford Smith has been Shaker Aamer’s attorney for 10 years at Guantánamo. He’s a human rights lawyer, founder and director of the international legal charity called Reprieve.

This is Democracy Now!, democracynow.org, The War and Peace Report. When we come back, we’re going to talk about Benghazi. Former Secretary of State Hillary Clinton is expected to testify today for up to 10 hours in Congress. We’re going to be talking about the four men who died—the ambassador, Chris Stevens, and three of the other Americans who died. We’ll be speaking with their friends. Stay with us. 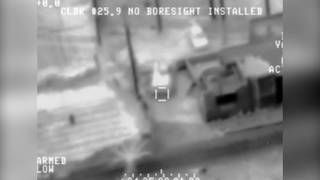