After $4.5 million in taxpayer money and 18 months, the Republican-led Benghazi investigation is set for its main event. Former secretary of state and current Democratic hopeful Hillary Clinton is testifying today for up to 10 hours before the House Select Committee probing the 2012 attack in Libya, which killed four Americans. Republicans say Clinton ignored pre-attack warnings and mishandled its aftermath. While previous reports have been scathing over security failures and have led to firings, none have accused Clinton or other top officials of wrongdoing. Many Democrats have accused Republicans of exploiting the Benghazi incident to scuttle Clinton’s 2016 presidential bid. Ahead of her testimony, we are joined by friends of two of the Benghazi victims: Veena Trehan, a friend of U.S. Ambassador Christopher Stevens; and Elf Ellefsen and Annie Tueller, who were friends with CIA contractor and ex-Navy SEAL Glen Doherty.

NERMEEN SHAIKH: After $4.5 million in taxpayer money and 18 months, the Republican-led Benghazi investigation is set for its main event. Former secretary of state and current Democratic hopeful Hillary Clinton is testifying today for up to 10 hours before the House Select Committee probing the 2012 attack in Libya, which killed U.S. Ambassador Christopher Stevens and three other Americans. The White House initially said the consulate was attacked by protesters denouncing a short American film that insulted the Prophet Muhammad, but it later turned out the attack was carried out by well-armed militants. The militants first attacked the diplomatic mission and then a secret CIA annex. Republicans say Clinton ignored pre-attack warnings and mishandled its aftermath. While previous reports have been scathing over security failures and have led to firings, none have accused Clinton or other top officials of wrongdoing.

AMY GOODMAN: The Select Committee is Congress’s eighth panel to investigate the Benghazi incident. A new chart by ThinkProgress shows there have been more congressional probes of Benghazi than of six other major attacks combined, including the Boston Marathon bombing, the USS Cole downing, the Oklahoma City bombing, the 1998 embassy attacks and 9/11. Many Democrats have accused Republicans of exploiting the Benghazi incident to scuttle Clinton’s 2016 presidential bid. California Congressmember Kevin McCarthy appeared to confirm as much in an interview with Fox News last month.

REP. KEVIN McCARTHY: Everybody thought Hillary Clinton was unbeatable, right? But we put together a Benghazi special committee, a select committee. What are her numbers today? Her numbers are dropping. Why? Because she’s untrustable. But no one would have known any of that had happened, had we not fought and made that happen.

REP. RICHARD HANNA: Sometimes the biggest sin you can commit in D.C. is to tell the truth.

REP. RICHARD HANNA: You know, and I—this may not be politically correct, but I—I think that there is a big part of this investigation that was designed to go after people and get an individual—Hillary Clinton.

NERMEEN SHAIKH: Republican Congressmember Richard Hanna of New York. Ignored in the Benghazi uproar is the state of Libya in the aftermath of the U.S.-backed NATO bombing. This week marks four years since former dictator Muammar Gaddafi was killed by a mob of rebel fighters, who filmed themselves celebrating over his mutilated body. Today, Libya is in chaos, with two governments claiming authority and scores of militant groups controlling territory in between. Hillary Clinton was asked about the Libya bombing during last week’s Democratic presidential debate.

ANDERSON COOPER: Secretary Clinton, on the campaign trail, Governor Webb has said that he would never have used military force in Libya and that the attack on the U.S. Consulate in Benghazi was inevitable. Should you have seen that attack coming?

HILLARY CLINTON: I think President Obama made the right decision at the time. And the Libyan people had a free election, the first time since 1951. And you know what? They voted for moderates. They voted with the hope of democracy. Because of the Arab Spring, because of a lot of other things, there was turmoil to be followed. But unless you believe the United States should not send diplomats to any place that is dangerous, which I do not, then when we send them forth, there is always the potential for danger and risk.

AMY GOODMAN: That’s Hillary Clinton, questioned by CNN’s Anderson Cooper during last week’s Democratic presidential debate. Also lost in the partisan wrangling over Benghazi are the four American victims: Ambassador Christopher Stevens, State Department employee Sean Smith, and CIA contractors Tyrone Woods and Glen Doherty. In fact, their memories were used in a shocking anti-Hillary Clinton attack that aired during the Democratic debate. As the victims’ faces are displayed on the screen, narrators are heard as if the dead men speak from the grave.

NARRATOR 1: Dear Hillary Clinton, I’d like to ask you why you ignored calls for help in Benghazi, and then four Americans were murdered.

NARRATOR 2: I’d like to know why you lied, saying the attack was a response to an Internet video.

NARRATOR 3: I’d like to hear why you tried to silence the Benghazi whistleblower.

NARRATOR 4: But, Mrs. Clinton, I can’t. What difference does it make?

AMY GOODMAN: An ad by the group Stop Hillary PAC.

We’re joined now by three guests with personal connections to two of the Americans killed in Benghazi. Veena Trehan is a journalist and activist. She was friends with U.S. Ambassador to Libya Chris Stevens in the early '90s, just before and as he was entering the Foreign Service. We're also joined by Elf Ellefsen and Annie Tueller Payne, who were friends with former Navy SEAL Glen Doherty, who was the CIA contractor, one of the two who were killed on that day.

I want to begin with Annie. If you can tell us about Glen Doherty, what we should know about him and how you think he would feel if he saw this ad saying what he would be saying from the grave?

ANNIE TUELLER PAYNE: Um, you want me to—

ANNIE TUELLER PAYNE: I have a hard time—you know, I don’t want to put words into my friend’s mouth. That would be paramount to that ad. I feel like that ad was in really poor taste, and it kind of set a new low for political advertising. I don’t know what—

AMY GOODMAN: How did you meet Glen?

AMY GOODMAN: How did you meet Glen?

MITT ROMNEY: Well, I’ve met some wonderful people. One was a former Navy SEAL, and—Glen Doherty, and he—we chatted for a while. He came from Massachusetts, where I’d been governor, and had family there. He also had skied in some of the places, snow skiing, that I had found during the Winter Olympics in Utah, that I had skied at. And we had a nice chat together. He had served as a Navy SEAL. And after his service as a SEAL, after a number of years, he had stayed involved helping in the Middle East, providing security services to our government and to other enterprises to provide help to them. And you could imagine how shocked I was to learn that he was one of the two Navy—former Navy SEALs killed in Benghazi just a couple of weeks ago. And I read on CNN International that when the report came that our consulate had been attacked, that he and the other SEAL that was killed with him, that they were in a different place. They were about a mile away in an annex somewhere else in the city. And when they heard that the consulate was under attack, they went to the attack. They didn’t hunker down and hide themselves. No, they went there. That’s what Americans do.

AMY GOODMAN: That was Mitt Romney when he was running for president. Speaking to WHDH in Boston, Barbara Doherty, the mother of Glen Doherty, addressed Mitt Romney’s using the story of meeting her son as part of his campaign speech. She said, quote, “I don’t trust Romney. He shouldn’t make my son’s death part of his political agenda. It’s wrong to use these brave young men, who wanted freedom for all, to degrade Obama.”

Elf Ellefsen, you also were very close with Glen. Your thoughts on what Romney was doing then and what’s being done today? In fact, Glen met Mitt Romney, as Romney said, right? At a party that the Romneys crashed in San Diego.

ELF ELLEFSEN: Yeah, to the best of my knowledge, you know, from the story I originally heard from Glen, that’s a fact. He mentioned that he met Mitt and spoke with him at that party.

AMY GOODMAN: And what did he say?

ELF ELLEFSEN: He didn’t get into it too much. You know, Mitt being somewhat of a political celebrity, you know, he mentioned that he had spoke with him a couple times, and Mitt was quite a showman, per se.

NERMEEN SHAIKH: And I want to turn to Veena Trehan—

ELF ELLEFSEN: A typical politician, you know, nothing adverse or negative or anything, just—you know, he said he seemed to be always in political character.

NERMEEN SHAIKH: I want to ask Veena Trehan, Veena, you met Christopher—Ambassador Christopher Stevens as he was deciding to enter the Foreign Service. Could you talk about what prompted that decision on his part?

VEENA TREHAN: Sure. I met Chris when he had a very good corporate law job. To me, and I think to everyone who knew him, it was clear that he would be on the partner track. But he always had a passion for other countries, and he always had a passion for diplomacy. And so he made a hard decision to step off that track and to pursue a career in the Foreign Service. And he specifically had a deep love for the Middle East and North Africa, specifically the people there, and thought he could make a very positive difference in their lives.

AMY GOODMAN: And as you watch this ad, Veena Trehan, and the spectacle of the Benghazi investigation today, what are your thoughts about how Chris Stevens would respond?

VEENA TREHAN: So, my thought is really that he would have, potentially, in my opinion, a lot of questions, maybe based on his core values. So, Chris always saw the differences between people as a cause for celebration, a cause for exploration, something to build societies on. And so, I think he would—he would object to the racially divisive language that’s being used in our partisan debates, the misogynistic language. I think he very much believed in diplomacy. I think he would ask a lot of Republicans, in turn, if he really could speak, sort of—what was going on, and what was the thought behind undermining so many of President Obama and John Kerry’s politically diplomatic efforts in Cuba and Iran?

AMY GOODMAN: We’re going to have to leave it there. Veena Trehan, Elf Ellefsen and Annie Tueller Payne, thanks so much. 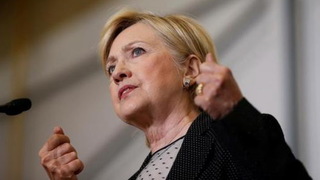