In one of the most shocking cases of police brutality inside a school, 17-year-old Noe Niño de Rivera spent 52 days in a medically induced coma after police tased him at school in November 2013. He was permanently brain injured. Last year Bastrop County in Texas settled a federal lawsuit for $775,000 with his family. We speak to his attorney, Adam Loewy.

AMY GOODMAN: We are joined by a number of guests, but we want to go directly to Austin, to Adam Loewy, who’s an attorney who represented Noe Niño de Rivera, a 17-year-old Texas student who spent 52 days in a medically induced coma after police used a Taser on him at school in Bastrop, Texas, in November of 2013.

ADAM LOEWY: This was a horrific incident of excessive force. Noe was a young man, about 17 years old, in a county south of Austin, and he was in a hallway in Bastrop High School, and there was a fight that broke out between his girlfriend and another girl, two females. Noe was the peacemaker. He was breaking up the fight. This was shown clearly on the video. But two school resource officers came up to him, pushed him out of the way, and one school resource officer pulled his Taser and tased him in the middle of the hallway. Noe fell back, slammed his head and then had to be put in a medically induced coma for 52 days. It was a horrific display of violence. It was much worse than we’re seeing on the video here in South Carolina.

But there’s a lot of similarities. The officer in question here in Austin—or in Bastrop, had had a history of violence against students. He was not properly trained. And the school did not have any sort of regulations on how to deal with school resource officers. So the themes are very consistent. And I would submit it’s a growing crisis in this country, in American schools, of violence toward students.

JUAN GONZÁLEZ: And, Adam Loewy, what happened to the officers involved in this case and to your client?

ADAM LOEWY: My client was able to survive. He went to a rehabilitation center. He’s doing much better now, but he is obviously not the same person. You cannot sustain that sort of injury and just be the same. But thankfully, he is alive and functioning. The officer was cleared, completely cleared of criminal charges. The county entered into a settlement for $775,000 for the incident, so we got the case settled.

And I will just add this: Until these officers are held criminally accountable for what they are doing, this will never change. If you look at all these incidents in this country, whether it’s in New York with Eric Garner, whether it’s in Ferguson, whether it’s the Larry Jackson case here in Austin, these officers are always able to escape criminal accountability. They always get off. And I would submit that’s one of the major problems here, is that officers simply believe they will not get in criminal trouble for what they do—which is the truth. It’s extremely rare. And until that changes, we will continue to see videos that are horrific like this.

AMY GOODMAN: I wanted to get your response to this, Adam Loewy. Attorneys representing the county initially said that Noe Niño de Rivera had failed to comply with orders and that Officer Randy McMillan, quote, “used the reasonable amount of necessary force to maintain and control discipline at the school.” The executive director of the Texas Municipal Police Association, Kevin Lawrence, also defended the officer’s actions. Speaking to KXAN last year, Lawrence suggested that the student, Noe, must have been culpable, because he apologized afterwards and then seemed aggressive in the hospital.

KEVIN LAWRENCE: He was apologizing to the officers for his behavior. He was saying, you know, “I shouldn’t have done that. I’m very sorry.” When they got to the hospital, he again got out of control and started being very aggressive with the hospital personnel, to the point that they called the sheriff’s office again and said, “We need help over here.”

ADAM LOEWY: Yes, that’s all demonstrably false. He had sustained a traumatic brain injury. He was in enormous pain. What he was saying afterwards, apologizing, is what anyone would do if they had been brutally attacked and had a brain injury. He was a 17-year-old kid who had just been attacked by a police officer.

And I will say, on a larger issue, when you look at how police and communities respond, or counties respond, it is always the same. They always say the police officer was justified. They always say that the victim, the student, was in the wrong. That is very typical. And while it’s a bit different in the South Carolina case, in which this police chief is saying he was shocked by the video, I will guarantee, if there was no video of this, this officer would be cleared, we would not be here talking about it. So, video changes the game. And I will also say that it’s unsurprising when police chiefs defend their officers. That’s always how they do it. And until there’s some accountability, we will continue to see these horrific incidents occur.

AMY GOODMAN: I wanted to go back to Phil Stinson. How typical is this, what you just watched?

PHIL STINSON: Well, we don’t know how typical it is. You know, my research is in the area of police crime. And I can tell you that over the last decade about 10,000 police officers in the United States have been arrested for all sorts of crimes. And of those officers, only about a hundred are school resource officers. So, one of the limitations of my data set is that everybody is arrested, all the officers are arrested. So if they’re not arrested, I don’t really know about it. But this is consistent with what we see in terms of policing in general. You know, policing is violent, and what works on the street probably is not appropriate in a high school.

Now, I do want to comment on the Taser issue. I did a study several years ago on the criminal misuse of Tasers by police officers. And it was a small sample of cases, again, less than a hundred cases. But in that research, what we saw was there’s only a handful of reasons why police officers tase somebody in an inappropriate or criminal way. And what we saw there was a pattern where they often tased teenagers for completely inappropriate reasons, for teenagers that were no threat to the officer at all, almost as if they were tasing them for sport.

Criminalizing the Classroom: Inside the School-to-Prison Pipeline

Criminalizing the Classroom: Inside the School-to-Prison Pipeline

NEXTCriminalizing the Classroom: Inside the School-to-Prison Pipeline 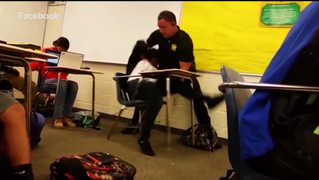